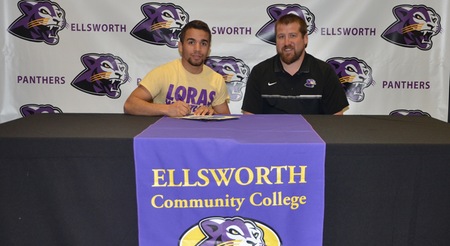 Duhawk head coach TJ Miller continues to round out his impressive 2018 recruiting class, this time adding a pair of lightweights with impressive credentials.

From the NJCAA ranks the Duhawks have added Ellsworth’s Javier Moreno. Compiling a 19-6 record at 125 pounds, Moreno was a NJCAA District champion, and finished as the eighth place All-American at Nationals.

“Their campus is the perfect size. They also have a great connection to the National Guard and being a member of that organization it was important to me to see this relationship,” Moreno said in an Ellsworth Press Release. “The coaching staff also influenced my decision. In just two years they took a 2-13 program and were 17-1 this season.”

“It is awesome to see where Javier is now from when he got to Ellsworth.” Ellsworth Head Coach Cole Spree added, “He is someone who believed in the process and the process paid him back. As a freshmen he spent the year as a redshirt/back up and then this year made the sacrifice to go down to 125. He not only made the lineup, but he also was able to become an All-American. He is a great student and wrestler and most importantly a great person. We are excited for Javier and the opportunities that lie ahead of him at Loras!”

The Duhawks also landed the talents of Sauk Prairie, Wisconsin standout Zeke Smith, who will come into Loras with a lot of family history. A two-time Wisconsin state medalist, Smith’s family originally hails from Dubuque. His Uncle Tom was a two-time NCAA champion under TJ Miller’s father, Jim at Wartburg. Zeke’s older brother, Eddie is currently on the Duhawk wrestler listed at 165 pounds, and his father Scott is a Loras alum.

Smith’s accolades include a pair of fourth place medals at the Wisconsin state tournament the past two seasons, but perhaps even more impressive are his freestyle and Greco-Roman accolades. In 2016 Smith claimed the 106-pound Junior titles in both styles at the Northern Plains Regional, and in 2017 he was second (freestyle) and sixth (Greco). The Northern Plains Regional typically is attended by outstanding talent from the Midwest including many Iowa natives.