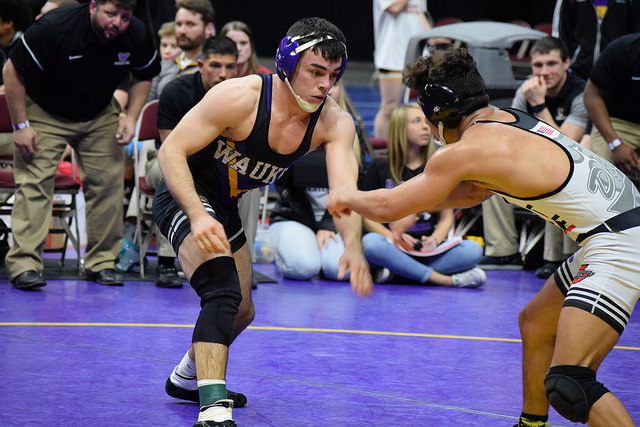 Three-time state qualifier Brock Parker of Waukee will be continuing his wrestling career at Loras College. The 2018 fourth place state medalist took the time to catch up with IAwrestle on his future.

“It starts with the coaches, Trevor Kittleson and TJ Miller.” Parker told IAwrestle why he picked Loras “The way they turned Loras around is incredible and I got very excited thinking about how I could be apart of that turn around. Along with that I felt I belonged after visiting. The campus and the team felt like home right away.”

Like his future program, Parker is currently riding an upswing in his wrestling career reaching the podium for the first time in February. After two straight trips to Wells Fargo Arena, Parker would not be denied and his third trip resulted in a fourth place finish in the 145 pound 3A bracket.

“I was very focused on improving my wrestling instead of managing weight. That was a pretty big factor.” Parker said on how he was able to reach the podium this season, “Also just accepting that it’s my senior year and anything that’s happened before the state tournament doesn’t matter. When it came to actual wrestling my main focus was just good position and keep getting to (my offense).”

Before picking Loras, Parker also considered Division III’s Buena Vista and Central College along with  NAIA power Grand View. In the end it might have been the similarities between his high school program and Loras that gave Parker that comfortable feeling.

“It was great to be able to compete for a team that went from working to just get a qualifier to becoming a nationally ranked team. I learned a lot through the tough times where there were critics, which made our success that much sweeter.” Parker said reflecting on his time at Waukee, “Going back to my freshman year Waukee was not even mentioned as a top 10 team. I was with Waukee as the team improved and got to the runner-up finish. Loras’ change to dominance has been very fast and to have the opportunity to join a team that has that kind of chip on their shoulder is very exciting.”

Right now Parker plans to wrestle either 141 or 149 pounds for the DuHawks, but is willing to go to whatever spot in the lineup Miller determines as best fit for him and the team. Parker joins a DuHawk recruiting class that features another 3A standout, heavyweight runner-up Dylan Olson of Dubuque Hempstead.