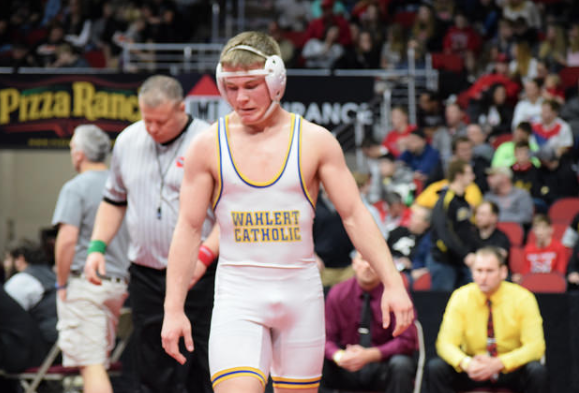 The Duhawks continue to assemble their 2018 recruiting class this time adding 2A standout Kolton Bartow of Dubuque Wahlert. The two-time state medalist has really emerged for Wahlert over the last two seasons, with his first trip to Des Moines earning him a third place medal, and a runner-up performance this past February.

“The coaches and community are awesome.” Bartow said of his decision, “I also love where Loras is heading. I think its a great opportunity for me to succeed in wrestling and in life.”

Compiling a 44-4 record, Bartow’s with one of those losses coming in the state finals to PCM’s Lucas Roland. Prior to that Bartow torched the field earning three straight falls to reach the finals. It was there that Roland managed to come out on top with a 5-1 decision. Bartow’s dominant season certainly caught our eye as the future Duhawk was named to one of IAwrestle’s All-State team.

“What I did wasn’t the goal I had for myself,” Bartow said on his runner-up performance, “But more importantly we achieved something we as a community are very proud of. A team state championship. It shows that there is always work to be done and now there is a new goal to try and reach.”

While the individual end result wasn’t what Bartow wanted his efforts played a huge role in Wahlert coming home with the team title as he and his teammates Josh Ramirez, Boone McDermott, and Blake Bradley all made it to the semifinals of their respective weight classes, and all but Bradley reached the finals. Despite only sending four to the state tournament, Wahlert managed to claim the top spot over title favorites New Hampton-Turkey Valley by an impressive 14 points.

“I consider myself lucky to have been able to coach Kolton,” Wahlert head coach Joel Allen told IAwrestle, “He is a phenomenal wrestler and even better person. As a former Duhawk I am proud Kolton decided to continue his career at Loras. He has a bright future ahead of him”

One thought on “Kolton Bartow Commits to Loras”