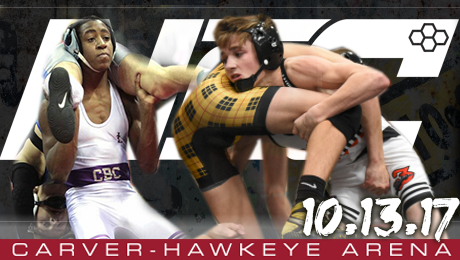 The results are in! Fort Dodge prep Drew Bennett was the winner of our Twitter poll that asked you, the fans, to select the final wrestler from Iowa to receieve a match at the “Night of Conflict”. The results were overwhelming as almost 800 fans selected Bennett to return to the event for his second career match at the event.

ONE spot left at Night of Conflict 3.

Who should get it from Iowa!?

What matchups do you want to see?

A year ago Bennett came into Carver-Hawkeye in search of an upset over a top five opponent. He came within inches of meeting that goal as he led 2-1 over Ohio’s Dylan D’Emilio midway through the third period at last year’s event, before falling in overtime 4-2. Throughout all of the regular season Bennett looked unstoppable carrying an undefeated record into the state semifinals where he lost to Waukee’s Kyle Biscoglia. In the spring Bennett was the freestyle state champion, and would go on to medal in both styles at the Northern Plains Regional.

His opponent will be #10 ranked Malik Johnson from Christian Brothers College High School in Missouri. A three-time state champion, Johnson has also lit it up on the national scene in his career as well, highlighted by winning the Cadet World Team Trials in Greco-Roman in 2016. Johnson also has podium finishes at Fargo (in freestyle and Greco-Roman) and Preseason Folkstyle Nationals. Fans of Iowa high school wrestling may recall that last season Johnson was the Independence Invite champion at 126 pounds where he defeated Solon’s Drew West in the finals.

One thought on “Drew Bennett Taking on Malik Johnson”