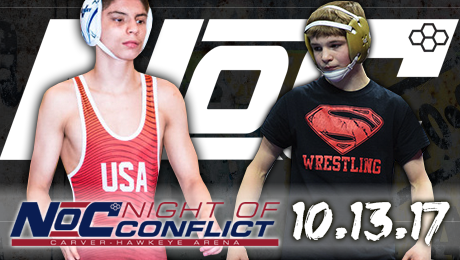 The matchups for the “Night of Conflict 3” presented by Rudis are in the works and we are happy to announce our first matchup between Mason City’s Cullan Schriever and Liberty, Missouri’s Jeremiah Reno. Schriever, one of the state’s biggest stars, is set to make his NOC debut in this top 10 matchup. The event will take place on October 13th in one of college wrestling most iconic venues, Carver-Hawkeye Arena in Iowa City, Iowa.

Going into his sophomore season Schriever is already considered the #3 pound-for-pound wrestler in the state, only behind three-time state champions Alex Thomsen and Brody Teske. After winning a Cadet freestyle national title as an eighth grader, Schriever burst on to the high school scene with a bang, going undefeated on the way to a state title this past February. This off-season Schriever has earned All-American honors at national events such as USA Wrestling’s Folkstyle and Freestyle Nationals, and UWW Cadet Freestyle Nationals. Schriever is currently ranked #10 by Flowrestling.

His opponent will be the #6 ranked Jeremiah Reno, who also won a freestyle national title in 2016 at the weight above Schriever. He has finished second in back-to-back years at the UWW Cadet Nationals, and was also runner-up at USA Wrestling’s Folkstyle Nationals this spring.

These two have met on one occasion and it was earlier this summer in Akron at the UWW Cadet freestyle tournament, with Reno coming out on top 7-4 in the semifinals.

5 thoughts on “Cullan Schriever to Meet Jeremiah Reno at NOC3”