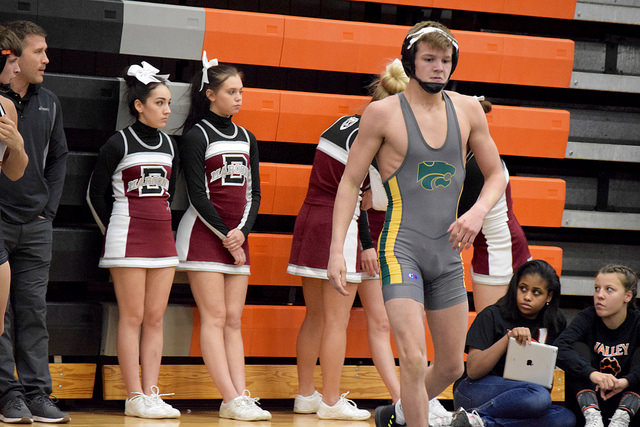 “I’ve dreamed of wrestling there my whole life.” Shaver told IAwrestle on his decision, “The team bond was amazing, they were welcoming, and I also got to see them not just as wrestlers but outside of wrestling when I hung out with them that played a big role.”

Ranked #9 at 120 pounds in IAwrestle’s final 3A rankings for the 2017 season, Shaver was downed by eventual finalist Gauge Perrien (Southeast Polk) and fourth place finisher Eli Loyd (Pleasant Valley). He was the runner-up at last year’s MVC conference tournament, and was one place away from qualifying as a freshman and sophomore for the state tournament.

Shaver was one of many wrestlers that was on campus for the Hawkeyes recruiting weekend. He commented on how the experience during his visit sealed the deal.

“When I walked in the room and watched practice I got goose bumps from the positive and hard working energy and also saw myself winning a NCAA title in there. I spent my whole wrestling career training there from club practices and I felt like it was home to me and I could vision myself wrestling there. The coaching staff, team, and fans atmosphere was amazing there.”

Shaver ended our interview with the below statement:

“I’d like to say thank you to my parents for paying all the money and taking the time take to take me to all the tournaments and wrestling events and also always believing in me. But also I would like to say thanks to my high school coaches coach Hynek, Malicoat, Long, Blood, Ironside, and LeClere for pushing me every practice to be a better person and wrestler, and also staying later after practices to help me fix mistakes and preparing me for season. I’d also like to take a second to give a big thanks to my club coaches too for believing in me and my brother Joe Slaton for putting in the time to look over film and correct mistakes with me and teaching me how to do the right things in wrestling. Also I’d like to say thanks to my teammates that pushed me in practices and friends for believing in me too and for supporting me. One more person I’d like to say thank you to is coach Lewis. He’s the reason why our school is succeeding in sports, he spends his time in the weight room and watches everyone to make sure your lifting correctly, he also spends slot of money in giving us the best lifting and agility equipment.”

One thought on “Cam Shaver Commits to Hawkeyes”