Iowa vs Pennsylvania is our next Night of Conflict matchup 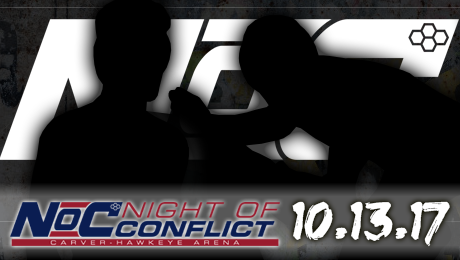 The matchups for the “Night of Conflict 3” presented by Rudis are in the works and we are happy to announce another matchup this one between Southeast Polk’s Cade DeVos and Hempfield Area, Pennsylvania’s Luke Kemerer. The event will take place on October 13th in one of college wrestling most iconic venues, Carver-Hawkeye Arena in Iowa City, Iowa.

DeVos has always been a big name in Iowa going back to his days in middle school where he was a triple crown winner for Team Iowa. In the state of Iowa he has always been considered one of the top wrestlers, holding the #1 ranking as a freshman before injury derailed his postseason, and DeVos also held the top spot heading into this year’s state tournament where he finished second.

Following up his first ever state medal, DeVos went on to a great summer performance in Fargo, North Dakota where he placed fifth in Cadet freestyle and third in Cadet Greco-Roman.

His opponent will be Flowrestling’s #19 ranked 138-pound wrestler, Luke Kemerer, who is a two-time Pennsylvania state medalist, taking third as a sophomore and sixth as a junior in the AAA division. Kemerer is also related to current University of Iowa standout, Michael Kemerer.