Blair’s Merola Coming for No. 2 Peyton Robb at Night of Conflict 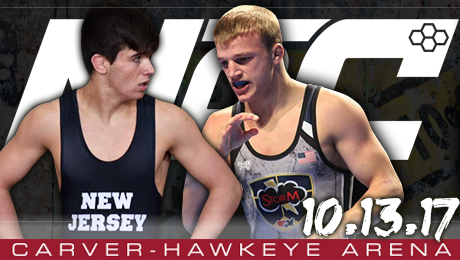 A couple of highly ranked out of state wrestlers will take center stage at the Night of Conflict as #2 ranked Peyton Robb of Owatonna, Minnesota will take on #6 Andrew Merola from Blair Academy in New Jersey.

The gem of South Dakota State’s recruiting class and one of the top seniors in the 2018, Robb comes in with a long list of state and national accolades. Robb comes into his senior year as a two-time Minnesota state champion and three-time place winner. He also has a very long list of national accomplishments in both freestyle and Greco-Roman wrestling as well. Just this summer Robb was a Pan American Games champion in both freestyle and Greco where he outscored his opponents 57-0. Robb also was a national champion in Greco at the Junior national championships in Fargo where he also placed third in freestyle, he went undefeated in both styles at the Junior National Duals, as well as placing in the top three in both styles at the UWW Cadet Nationals in Akron, Ohio. Flowrestling ranks Robb #2 at 152 pounds and #30 overall in the class of 2018.

His opponent comes in from prestigious Blair Academy in New Jersey, one of the top high school programs in the country, and is committed to Cornell University. Merola is ranked #6 at 160 pounds and #32 overall in the class of 2018 by Flowrestling. Merola enters as a two-time National Prep champion, as well as runner-up at both Ironman and Beast of the East this past season. He is a multiple time place winner at both UWW Cadet nationals in Akron as well as Cadet and Junior nationals in Fargo. He placed fifth in freestyle at Fargo this summer and won a Cadet Greco title in 2015.

3 thoughts on “Blair’s Merola Coming for No. 2 Peyton Robb at Night of Conflict”