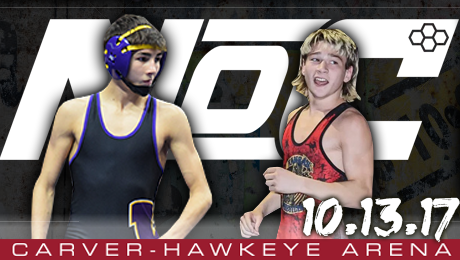 Two-time state champion Kyle Biscoglia returns to the “Night of Conflict” presented by Rudis and will be taking on a top ten opponent from Kansas, Jace Koelzer. In search of win number two at our event, Biscoglia competed in the inaugural event where he defeated Cody Phippen by a score of 4-2. Phippen of course is also returning to the event and the #7 ranked wrestler will be facing Aden Reeves.

One of the state’s top wrestlers in the class of 2018, Biscoglia has racked up a number of accolades during his time at Waukee. In addition to winning back-to-back state titles at 113 pounds in 3A Biscoglia has garnered top finishes at national tournaments as well: Corn Cob Nationals, Folkstyle Nationals, USA Wrestling’s Freestyle Nationals, UWW Cadet Nationals, and Super 32. With Biscoglia being a constant presence at earning podium finishes on the national scene it’s little surprise that he came in at #7 in this summer’s Fab 50 rankings, which ranks all Iowa high school wrestlers regardless of grade. Flowrestling also ranks Biscoglia #18 at 113 pounds and #100 overall in the class of 2018.

Coming in from Olathe, Kansas is the #9 ranked Koelzer who is looking to up his stock after coming off a summer that saw him earn double up in All-American honors at Fargo. Additional accolades for Koelzer include being a two-time Kansas state medalist, 2016 Preseason Nationals Runner-up, and he was also a double All-American at Fargo as a Cadet as well.

This will not be the first meeting between these two wrestlers, as Biscoglia won by major decision at the 2015 Council Bluffs Wrestling Classic.