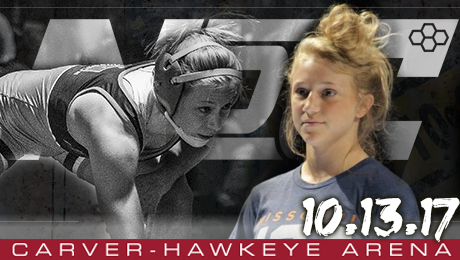 IAwrestle is proud to announce another top ten matchup for the Night of Conflict  presented by Rudis. Earlier this summer Flowrestling released their inaugural girl’s national high school rankings. Felicity Taylor of South Winneshiek High School in northeast Iowa debuted at #7 at 106 pounds. Her opponent will be #5 ranked Carly Valleroy from Mehlville High School in St Louis, Missouri.

Taylor comes into the event fresh off of a fifth place finish at the Junior Womens National Championships in Fargo where the women compete in freestyle wrestling. She also placed fifth in the Cadet division of Fargo Nationals in 2015. Taylor is also an accomplished folkstyle wrestler having placed second at both the US Marine Corp Girls Folkstyle Nationals in Oklahoma and the Cliff Keen USAW Preseason Nationals in Cedar Falls within the last year. Taylor was also a district qualifier for South Winneshiek High School last season and a winner in the inaugural IAwrestle War at West Gym this spring as well winning 9-0 over Tateum Park.

Her opponent, Carly Valleroy, hails from St Louis, MO and comes in with an impressive resume as well. While she did not compete at freestyle nationals in Fargo this summer she does come in as a three-time All-American placing sixth in Juniors in 2016, eighth in Juniors in 2015, and fourth in Cadets in 2015. In 2016 she also placed fourth at Body Bar women’s nationals and seventh at USAW Girls folkstyle nationals.