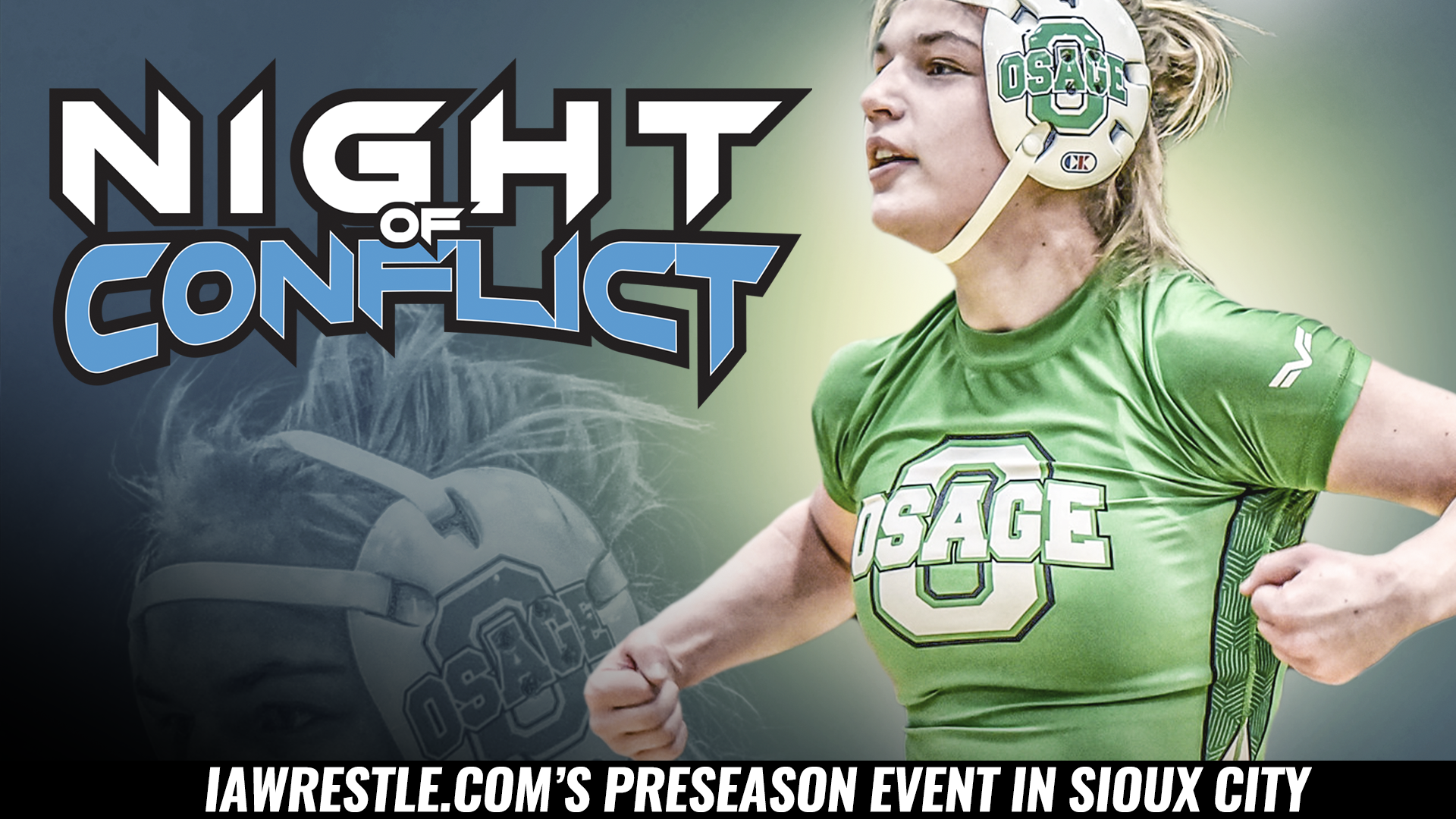 Last week we announced the first two match-ups for the first-ever all Girls Night of Conflict event. Instead of just rolling these out slowly we are going to go ahead and give the people what they want and announce the next NINE matches! We are still working on possibly adding another match or two so stay tuned for that. In case you missed Potentially Dangerous today you can replay it above but here are your matches!

Boleyn was a relative unknown coming into the IWCOA state tournament last season but finished as a runner-up after upsetting Griffith in the semifinals. Boleyn is currently #29 on the girls Fab50 list for Iowa. Griffith was the 2019 state champion and multiple time AAU state champion who is currently ranked the 5th best girls wrestler in Iowa on the Girls Fab50. Will Boleyn prove that she belongs with the very best girls in the state or can Griffith get some revenge?

Many wrestling fans around Iowa are familiar with the Avila family from Lisbon due to Robert Avila being a multiple time state champion on track to possibly become a 4-time state champion. What some wrestling fans don’t know is that his sister Jannell is on track to maybe do the same thing! She had a great freshman season and captured the IWCOA state title and is currently ranked the 7th best girls wrestler in Iowa in the Girls Fab50. You might see that we don’t have Madison Diaz ranked but that is because she hasn’t wrestled in Iowa yet. She is a highly decorated wrestler who recently transferred into Waverly-Shell Rock from Florida and by all accounts is more than holding her own in the wrestling room of the defending state championship team. This will be a big gauge of just where Diaz fits into the ranks here in Iowa.

Alexis Ross comes in as the #8 wrestler in Iowa per the Fab50 after having a dynamite freshman campaign where she finished 3rd in probably the toughest bracket. She is a multiple time AAU state champion with a ton of talent. Her opponent, Regan Griffith, is #12 overall in Iowa after finishing 3rd & 2nd at the IWCOA state tournament each of the last 2 seasons. She competed for Waukon High School those years but her family recently moved for her father’s work and she will compete for North Fayette Valley this coming season.

Olivia Hamma is another dynamic Sophomore and is currently ranked #15 overall in the state of Iowa. She is an AAU state champion with a lot of accolades. Raelynn Strelow of Cedar Falls hasn’t been around the sport as long but had a major breakout season as a Sophomore placing 6th at the IWCOA state tournament and following that up by placing 3rd at AAU state. She is currently ranked #31 in the Fab50.

These last names should sound familiar to wrestling fans across the state of Iowa. Adyson Lundquist only started wrestling a couple of years ago but has quickly made a name for herself placing 5th at IWCOA state and then picking up the AAU state title. She is ranked 24th in the girls Fab50. There aren’t many towns in America as passionate about wrestling as Osage, Iowa and anyone who knows about Green Devil wrestling knows the Goodale name. The newest to add her name to the long line of success is Sophomore Jalynn Goodale who comes in at #49 in Iowa after placing 7th at IWCOA state and 4th at AAU state as a freshman.

Barnes comes from a great wrestling school at Lewis Central and looks to add some girls wrestling accolades to there record books. Sioux City East isn’t as well known for wrestling but coach Colon is looking to change that and Morales is helping as she has made a name for herself in girls wrestling circles. Both of these wrestlers finished 5th at the IWCOA state tournament last season with Morales at 120 pounds and Barnes at 126. Morales comes in at #37 and Barnes at #44 on the current Fab50.

Both Webster and Sondall are experienced wrestlers who fell short of there goals last year when they fell one match short of placing at IWCOA state after having very good seasons. Both placed at the 2019 IWCOA state tournament and are AAU state place winners. I expect this to be a very exciting and even match between a couple of underrated wrestlers.

We get another very good western Iowa wrestler here with Morgan Griffin coming in ranked #28 in the Fab50 after finishing 3rd at the IWCOA state tournament last season. Her opponent Maggie Schroeder placed 7th in the state last season and comes from a very good girls program at Colfax-Mingo.

Abby Boehm makes it three girls in the event for North Fayette Valley. Boehm placed 3rd at 195 pounds at the IWCOA state tournament last season and ranks #33 in Iowa in the Fab50. Her opponent is Bella Canada of AHSTW who placed 8th at 170 pounds last season and is coming up for this match.
The dual the event which takes place on 9/25 will be available on Rokfin and Long Lines Broadband, with limited in-person seating also available.