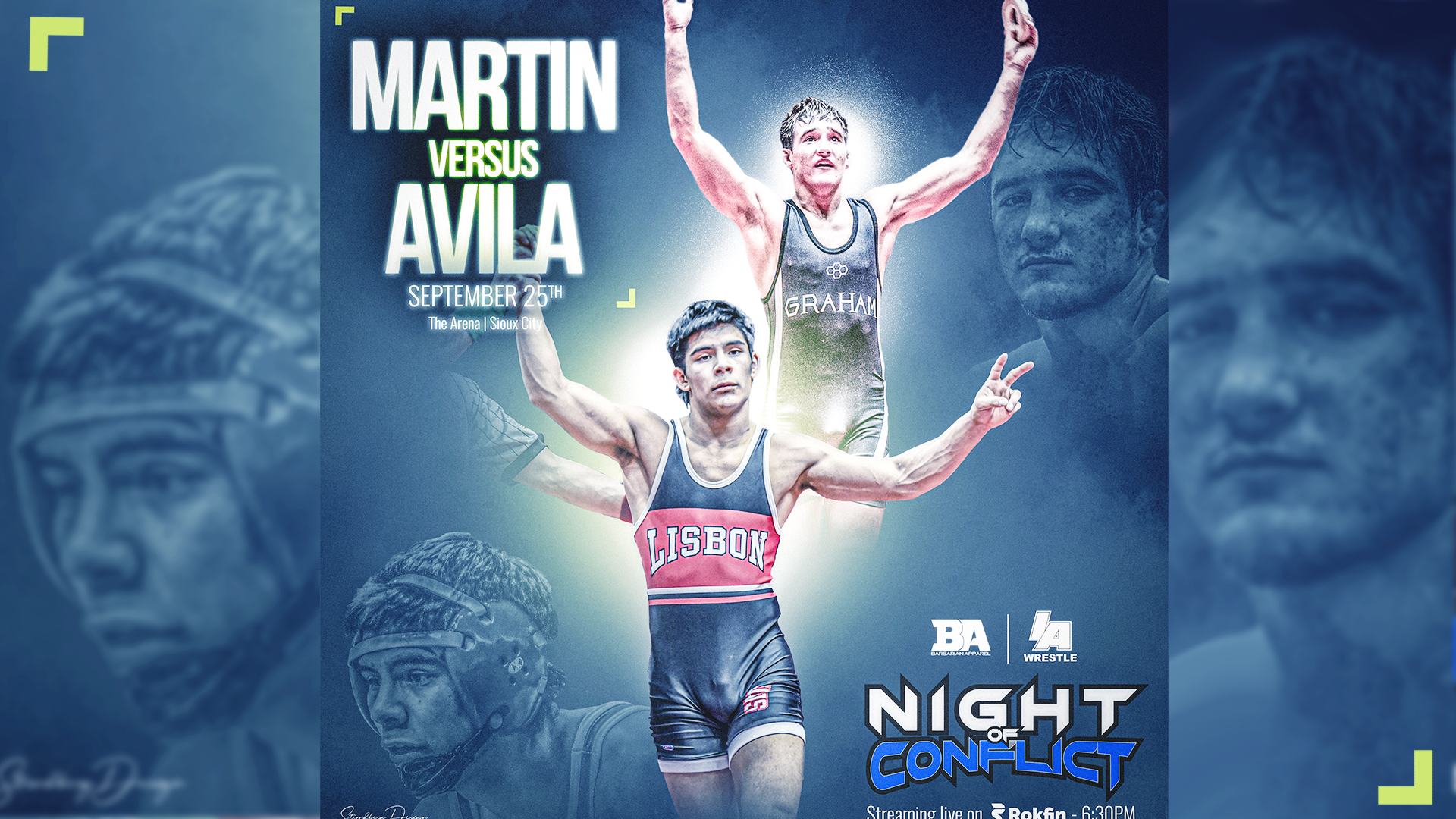 IAwrestle is proud to announce it’s main event for the September 26th Night of Conflict card with one of the state’s top ranked wrestlers taking on a nationally ranked opponent. The out of state prep will be none other than Alek Martin of St. Paris Graham, Ohio who checks in at #6 on MatScout’s national rankings at 145 pounds. Naturally with one of the best in the country coming in state to battle, we looked to Lisbon’s Robert Avila to answer the call.

Checking as IAwrestle’s #4 ranked wrestler in the FAB50, Avila is easily one of the biggest names – and perhaps the biggest available recruit in the entire state. He’s won titles as a freshman and sophomore for the Lions setting him up to be the third Lisbon wrestler to win four state titles within the last ten years. Avila also boasts a Greco-Roman All-American honor and was a USA Wrestling Postseason national champion which has put him in the top 100 for the Class of 2022.

From out of state we have Martin, from the powerhouse Graham that has produced numerous Division I stars over the years, including three-time Hawkeye All-American Alex Marinelli. One program that has done a good job digging a pipeline into Graham is South Dakota State, which is where Martin is headed after closing out his high school career in 2021. He’s a multi-time USA Wrestling All-American and has placed at the prestigious Walsh Ironman twice.

State finalists will collide in our next NOC matchup with Don Bosco’s Cael Rahnavardi takes on Fort Dodge’s Dreyzon Phillips. The dual event which takes place on 9/26 will be available to subscribers on Rokfin and Long Lines Broadband, with limited in-person seating at The Arena in Sioux City, Iowa. (TICKETS)

One of the more impressive storylines from 2020 was Rahnavardi who cut down from 170 to 145 and finished second in Class 1A. As a sophomore Rahnavardi wrestled up to make the lineup and came away with a fourth-place medal and by returning to a more natural weight in 2020 he was able to reach the finals. The junior season pushed Rahnavardi up to #31 in our FAB50.

The other side of this match was a breakout candidate in Phillips who was also a finalist but in Class 3A. After missing out on the state tournament as a freshman and then missing the podium as a sophomore, Phillips jumped levels to find himself in the finals opposite of Caleb Rathjen. He narrowly missed out on making it into the FAB50 and is committed to wrestle for nine-time defending NAIA champions Grand View.

The dual the event which takes place on 9/26 will be available on Rokfin and Long Lines Broadband, with limited in person seating also available.