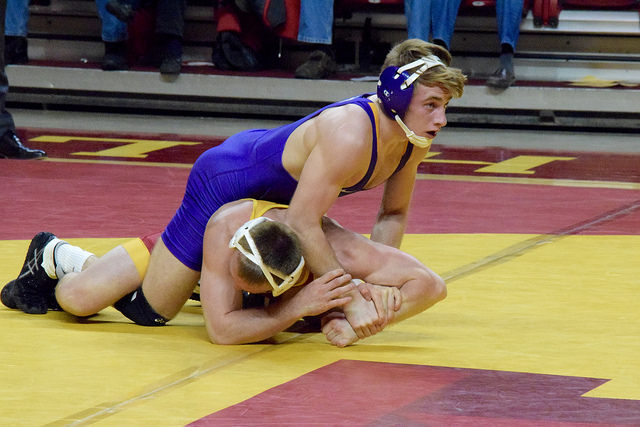 Earlier this summer we reported that a shake up was happening for UNI at the lightest weight classes and part of that shift included Rudy Yates, who will be a redshirt freshman, moving from his projected 125-pound weight up to 133. That essentially opened the door for sophomore Jay Schwarm to be the sole front runner for this year’s spot at 125.

Dylan Peters had been an anchor in Doug Schwab’s Panther lineup for four seasons, but in that stretch he battled a lot of injuries. While those injuries did create a “what could’ve been” situation for Peters, it did give Schwarm the opportunity to get some starting experience as a result.

With 10 starts in 2016-17, Schwarm’s starting record was 5-5 but a couple of those wins were key victories. His first was his 8-4 win over former NCAA qualifier Kyle Larson in the Iowa State dual, which was a pivotal win in the dual giving Schwab his first win over the Cyclones since 2014. The second highlight win was a 5-1 decision over NCAA qualifier Barlow McGhee which helped solidify a win over Missouri to give UNI the MAC regular season conference title. It also flipped a result from earlier in the year where McGhee won 14-5 over Schwarm at the Scuffle.

Schwarm’s career record (including his redshirt year) stands at 35-14 and he appears to be on an upward trajectory.

At this point it feel pretty safe to say that Schwarm has distanced himself from projected backup Tanner Rohweder. In their two meetings in official competition Schwarm has won both matches by bonus, a major decision as true freshmen and a technical fall last season. Not only that but Schwab leaned on Schwarm exclusively while Peters was injured last year.

That being said Rohweder has definitely had his moments. He was 11-8 last season with his two big wins being a major decision victory over Josh Portillo of SDSU (who beat Schwarm at the UNI Open) and also a 9-8 victory over Perez Perez, who may start the season at 125 for the Hawkeyes.

Redshirting for the Panthers at this weight will be Texas prep Jack Skudlarcyzk and North Scott standout Jay Schipper.

With 133 being freed up due to the aforementioned fact that Josh Alber is bumping to 141 pounds the Panthers have yet another opening in their lineup that will be filled by one of two wrestlers coming off a redshirt. Based off last year results the front runner would appear to be Illinois prep Rudy Yates.

Coming into college Yates looked like he was going to be a career 125-pound wrestler, but plans changed and Yates has grown into 133 pounds. With a 15-2 redshirt record, Yates managed to pick up a number of big wins including winning two meetings against former Hawkeyes Brock Rathbun and Jack Wagner (who has since transferred to UNI), and he also won 6-4 over Campbell wrestler Nathan Boston. His two losses were to Nebraska All-American Eric Montoya and NAIA national champion Jacob Colon.

The addition of Wagner looks to be a big one when examining the depth chart as Schwab will now have two solid, young options battling for this spot in the lineup. Wagner received a full release from Iowa making him immediately eligible for the Panthers. As mentioned above, Yates took both meeting against Wagner during the regular season. His redshirt record was 19-6.

Wrestle Stat, which rates all wrestlers at a given weight, currently has Yates at #30. Given the fact that 33 wrestlers qualify at a given weight it appears that Yates could be wrestling late into March already, and given his talent we should see that number improve over the course of the season.