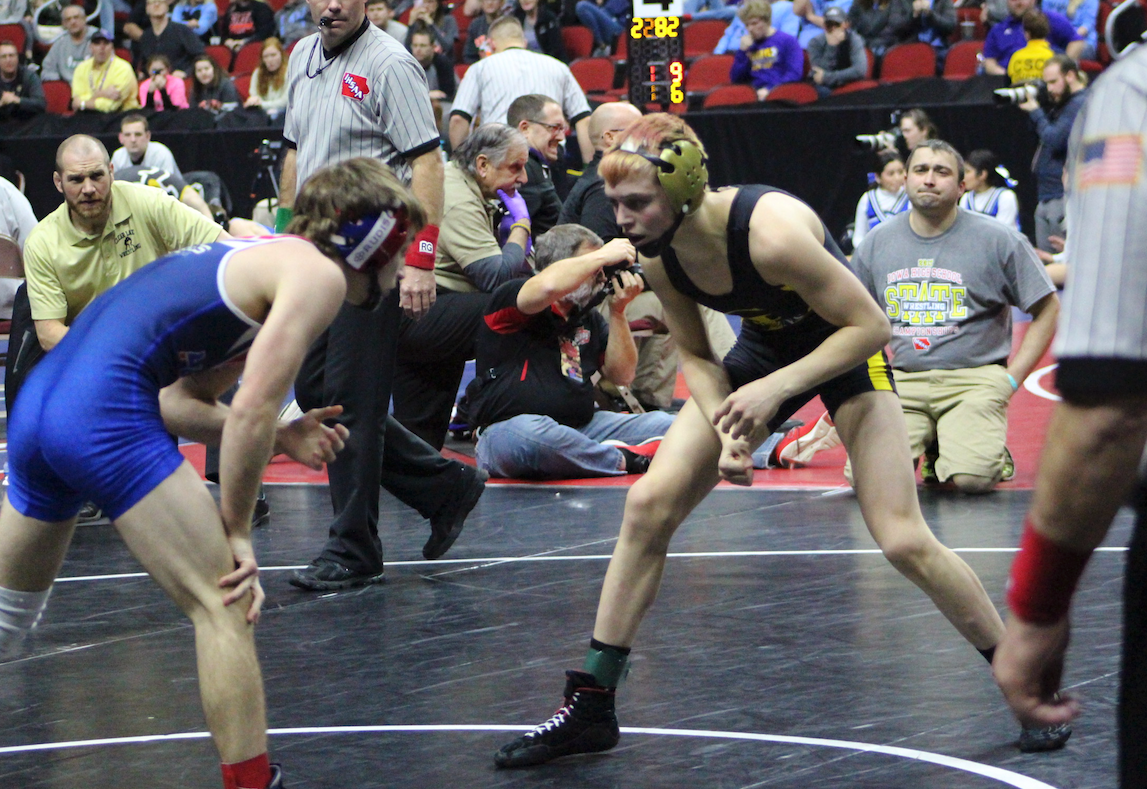 It’s officially September 1st and for fans that follow high school recruiting they already know what that means. Today marks the official start of contact between college coaches and high school wrestlers entering their junior year of high school. While most colleges are still working on building their 2018 recruiting class, they are also starting to plant the seeds for 2019 as well. We’ll take a look at state top five wrestlers in the class of 2019.

Checking in at #2 on the list is Clear Lake’s Eric Faught, who is another lightweight standout in the class of 2019. Going back to his middle school days Faught has always been a name to watch with top finishes at Corn Cob Nationals, USA Wrestling Folkstyle Nationals, Blue Chip Fall Brawl, Tulsa Nationals, Reno Worlds, the list goes on. Since moving into high school not a lot has changed for Faught as he has continued to earn hardware in the state of Iowa and on the national level. Faught’s best year was his freshman year where he was second at the state tournament, runner-up to make the Cadet freestyle World Team, and third out at Fargo in freestyle. As a sophomore he finished third at state (his aforementioned loss came to Reeves) and he did not compete in freestyle this summer.

LIke Reeves, Faught will be a lightweight recruit in all likelihood and should receive a fair amount of interest.

Coming off his best year to date, DeVos is riding a monster high after picking up All-American honors in both freestyle and Greco-Roman this summer after taking second at the state tournament. The Rams return three state finalists from 2017 and that will likely mean that DeVos will heavily counted on if Polk is going to keep the team trophy in Pleasant Hill. This fall DeVos will have a chance to try and pick up a marquee win with #19 Luke Kemerer coming to the Night of Conflict to face the SEP wrestler.

Looking forward it’s harder to guess where DeVos will end up in college as he is still growing. In fact projecting his weight for the upcoming season is difficult as he could compete at 138 or 145 pounds depending on how these next couple months go.

After earning a state medal as a freshman in South Dakota, Akron-Westfield’s John Henrich struck gold in Iowa winning the 1A 160 pound weight class as the #4 ranked wrestler. On his way to the state title Henrich took out the #1 (by fall), 6, and 3 wrestlers. Even though he had been active in summer wrestling when he lived in South Dakota, Henrich was absent from the freestyle and Greco scene this past summer.

Henrich will likely project as a middleweight in college, but pinning down exactly what weight is still a guessing game. Once the season arrives we will likely have a better picture of what’s to come.

Last season Broderson took a leap forward ranked #3 in the state to win the 2A state title at 160 pounds after failing to qualify for the state tournament as a freshman. Following that Broderson went on to win the state’s triple crown, winning both the freestyle and Greco-Roman titles in May, and finished his summer with All-American honors in Greco out at Fargo.

The largest wrestler in the top 10, Broderson competed at 170 pounds this summer and with him only being half way through his high school career, he will definitely have room to grow into a bigger weight.

More will come on Runyon