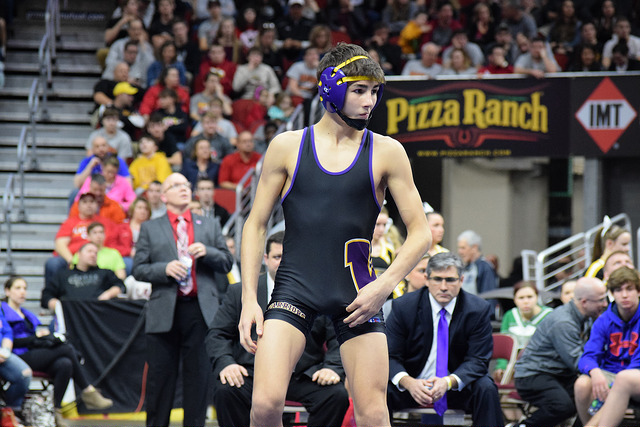 Waukee’s two-time state champion Kyle Biscoglia has made his commitment to wrestle at the next level for Doug Schwab at the University of Northern Iowa. Biscoglia currently finds himself at #19 in the Flowrestling rankings at 113 pounds but that all could change this Friday at the Night of Conflict. He will take on #10 Jace Koelzer of Kansas at Carver-Hawkeye Arena.

“Schwab and Co’s goals for UNI align with my goals and I can see myself being a part of the Panther Train.” Biscoglia told IAwrestle, “Being a part of the Iowa wrestling community was also important to me. I have looked up to all the Iowa State, Iowa and UNI wrestlers and it is exciting to become part of one of those Iowa programs.”

“Going to national tournaments has been hugely important to my success.” Biscoglia said on the importance of Iowans competing out of state. “They show you what you need to work on plus it helps with exposure to national coaches.”

Biscoglia has won at 106 and 113 pounds but has grown a lot this summer. Biscoglia is projected at 125-141 pounds for the Panthers.

“Kyle will approach collegiate wrestling no different than he is now,” Waukee’s Head Coach Chad Vollmecke said of his athlete, “A student of the game, confident that he can achieve great things. He’s the most consistent person I have ever coached. His work ethic, focus and loyalty are at the core of what makes him great.”

This will be Schwab’s fourth commit from IAwrestle’s Fab 50 with Biscoglia checking in at #7. The Fab 50 ranks all wrestlers in the state of Iowa, regardless of grade or class. #4 Michael Blockus, #23 Gable Fox, #37John McConkey, Noah Glasser round out the rest of the Panther Train’s 2018 recruiting class.