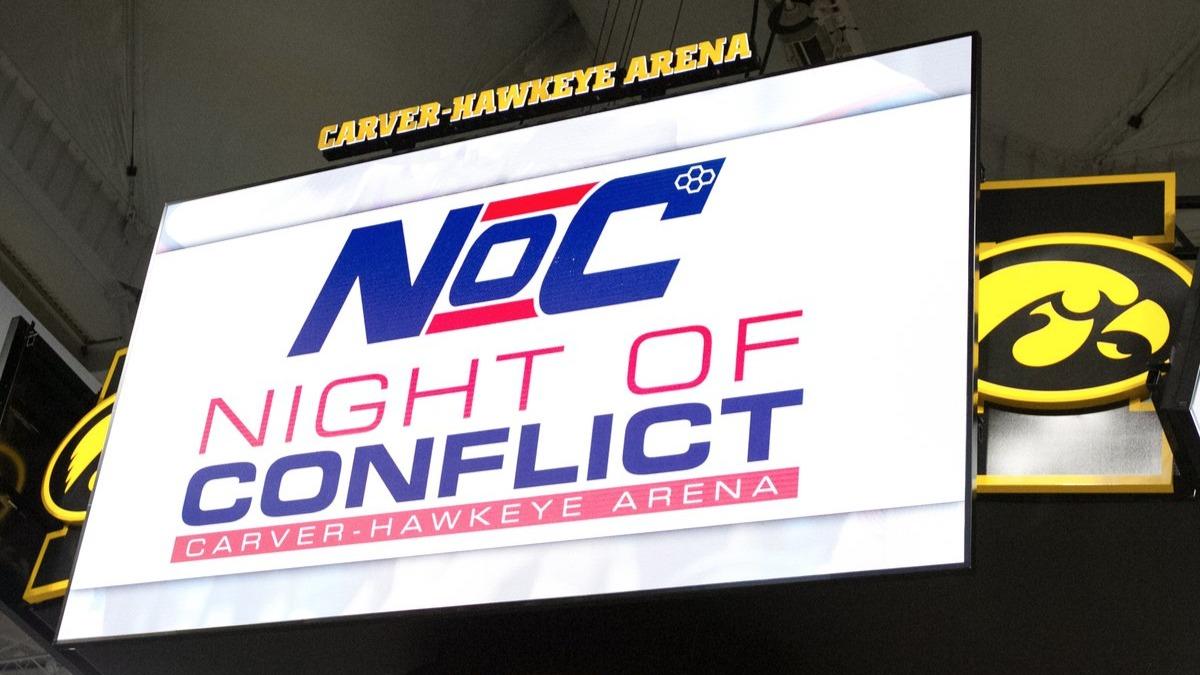 One year ago Valley-West Des Moines’ Joel Shapiro was one of Iowa’s fastest rising juniors in the state of Iowa making the podium at Fargo before going on to an undefeated regular season where he won his first state title. Fast-forward to today and Shapiro has established himself as one of the top wrestlers at his weight – No. 4 at 195 pounds – and he is currently the top verbal in Kevin Dresser’s first recruiting class at Iowa State.

Coming in from Michigan is another top five wrestler at 195 pounds, No. 3 Brandon Whitman of Michigan has also committed to wrestle at the next level at North Carolina. A three-time state champion, Whitman has also picked up multiple All-American finishes across the country in Freestyle and Greco-Roman, including reaching the finals of the Cadet World Team Trials. Whitman picked up a huge 13-2 win over Pennsylvania’s Trent Hidlay at the Junior National Duals in June. Hidlay is currently ranked No. 2 at 170lbs.

Returning to the Night of Conflict for the second straight year will be New Hampton’s Michael Millage taking on a top five ranked wrestler from one of the nation’s top high school programs, Malcolm Robinson of Blair Academy. Ranked #4 in the nation at 138 pounds and committed to Rutgers, Robinson marks the second time Millage will face a top five opponent at the event. A year ago Millage bumped up a weight to take on Illinois prep Jason Renteria and they put on a show racking up 30 total points. Renteria would take the match 19-11.

This will be a meeting between two top 20 ranked wrestlers, as Millage has climbed into the rankings (#20) with a strong regular season as a junior, winning the 2A 126-pound state title over Solon’s Drew West. From there, Millage packed on some weight, moving up to 138 pounds where he earned his first Fargo All-American finish taking sixth in freestyle. Millage recently committed to the University of Northern Iowa where he is projected at 141 pounds for the Panthers.

Aside from the fact that Robinson competes for one of the nation’s most prestigious private schools, he has also put in top finishes at some of the toughest folkstyle tournaments in the country. This past season includes a third place finish at the Walsh Ironman and winning the Beast of the East. The Night of Conflict does utilize a pushout rule in addition to the regular high school rules, but Robinson isn’t lacking in freestyle credentials, taking third at the Cadet Freestyle National tournament a year ago.

We pulled out a pair of veterans for our next “Night of Conflict” matchup presented by The Rudis. Albia’s Aden Reeves returns for his third go around and will face Missouri prep Cody Phippen, who competed in the inaugural event.

After bursting onto the scene as a double Fargo All-American prior to the start of his freshman year, 2017 has been the best we have seen of Reeves to date. As a sophomore Reeves won his first state title downing both Eric Faught and Drake Doolittle, two well credentialed Iowans, along the way. He picked up a win at Freestyle state championship over Waukee two-time state champion, Kyle Biscoglia, and finished his summer with his third straight podium finish at Fargo.

Since we last saw Phippen in our first event he’s been busy. Back-to-back state titles, Fargo All-American, Cheesehead finalist, and USA folkstyle national champion are just some of the top finishes for Phippen over the last two years.

The matchups for the “Night of Conflict 3” presented by Rudis are in the works and we are happy to announce another matchup this one between Southeast Polk’s Cade DeVos and Hempfield Area, Pennsylvania’s Luke Kemerer. The event will take place on October 13th in one of college wrestling most iconic venues, Carver-Hawkeye Arena in Iowa City, Iowa.

DeVos has always been a big name in Iowa going back to his days in middle school where he was a triple crown winner for Team Iowa. In the state of Iowa he has always been considered one of the top wrestlers, holding the #1 ranking as a freshman before injury derailed his postseason, and DeVos also held the top spot heading into this year’s state tournament where he finished second.

Following up his first ever state medal, DeVos went on to a great summer performance in Fargo, North Dakota where he placed fifth in Cadet freestyle and third in Cadet Greco-Roman.

His opponent will be Flowrestling’s #19 ranked 138-pound wrestler, Luke Kemerer, who is a two-time Pennsylvania state medalist, taking third as a sophomore and sixth as a junior in the AAA division. Kemerer is also related to current University of Iowa standout, Michael Kemerer.