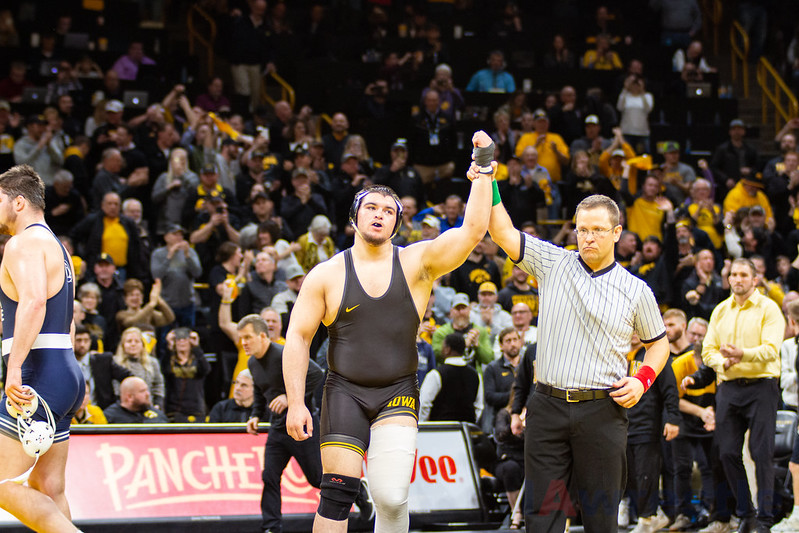 The University of Iowa is eastward bound once again this weekend making a return to the Great Lakes State of Michigan. The Hawkeyes pulled double duty this last weekend by edging Penn State 19-17 on their home mat followed by a lopsided victory against Michigan State to close the weekend on the road. The Hawks enter this contest unbeaten in all competitions, including wins over Nebraska, Ohio State, and the aforementioned Penn State.

The other side of this dual is a Wolverine squad that for the most part is deferring a lot their lineup strength due to the Olympic year. All-Americans Stevan Micic, Logan Massa, and Myles Amine are all taking an Olympic redshirt. That’s not to say the Wolverines are completely punting. In the past few weeks, they pulled Kanen Storr out of Olympic redshirt, and they recently benefited from the debut of blue chip freshman Joey Silva.

Coming into this dual half of the matches look like they will feature a ranked head-to-head meeting. Three of those bouts will be a top ten matchup, and one will be a top five battle between the weight’s #2 and #3 ranked wrestlers.

Starting with the marquee bout that will, without question, be the heavyweight meeting between Mason Parris and Tony Cassioppi. The Wolverine comes into the dual holding the edge in rankings, but so far the Hawkeye freshman has put together an extremely impressive season defeating multiple All-Americans and won the Midlands.

The two haven’t met in college, but the two did square off at Fargo back in 2018. In the heavyweight semifinals of the Junior Freestyle bracket, Cassioppi defeated Parris by the score of 12-2, and he would eventually go on to win the bracket. It’s also worth mentioning that Parris is no slouch when it comes to freestyle. In 2019 Parris captured the gold medal in the Junior Division at the United World Wrestling’s World Championships.

Listen to Potentially Dangerous Podcast featuring our friends from Bloodround:

Freestyle and folkstyle share some commonalities, so it would foolish to equate Cassioppi’s dominant win from 18 months ago to this weekend’s meeting, but Hawkeye fans nonetheless are hoping their freshman can produce another marquee win in his young career.

The other top ten battles will hit in the middle of the lineup where #2 Pat Lugo will face #9 Kanen Storr at 149 pounds and #5 Kaleb Young will face #9 Will Lewan at 157 pounds. Some folks may remember Storr from his days at Iowa State where he spent a year and a half (and was the team’s 141-pound starter) before he eventually transferred back to his home state after a falling out with the coaching staff.

The other ranked matches will be between #1 Spencer Lee and #19 Jack Medley at 125 pounds, and #9 Abe Assad and #20 Jelani Embree at 184. After taking back-to-back tough losses it will be interesting to see how the Hawkeye true freshman can respond in his match against Embree.