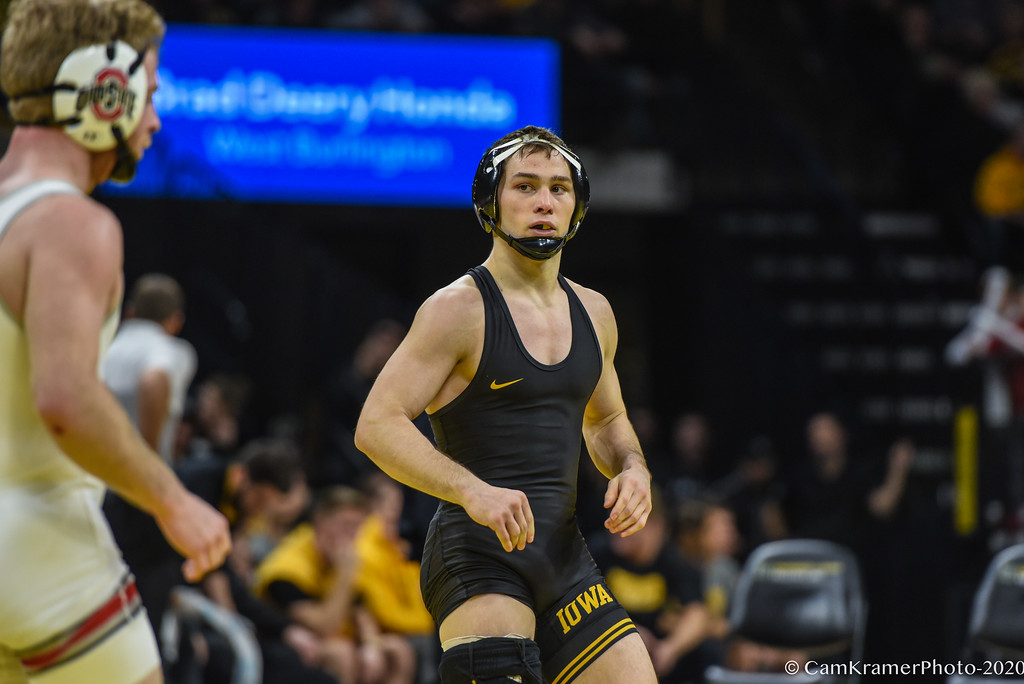 The win total for the University of Iowa has reached double digits as the Hawkeye squad rolled through the Michigan State Spartans 32-3 this afternoon in Lansing, Michigan. The Hawks took nine of ten bouts from the Spartans including three bonus wins.

With the dual starting at 125 pounds it was business as usual for two-time NCAA champion Spencer Lee who earned a first period fall over Logan Griffin to continue his run of bonus point victories. Lee is now 12-0 with all wins coming by bonus.

At 133 pounds senior Paul Glynn received starting duties filling in for the injured Austin DeSanto. He took on Garrett Pepple, and the Spartan wrestler was able to score the first points for Michigan State on the day with a takedown in the first period. After a scoreless second period, Pepple got out to go up 3-0, but Glynn immediately answered with a takedown.

Following an intentional release, Glynn was able to secure a cement mixer against Pepple to put the Michigan State wrestler on his back. The move pushed Glynn to a 9-4 win.

Carter Happel came out firing taking down Matt Santos to open the 141-pound bout. The Hawkeye junior was making his third consecutive start in place of the injured Max Murin and looked solid controlling the entire match. In the second period, Happel escaped to increase his lead to 3-1 and rode Santos the entire third period to close the match a 4-1 winner.

After picking up career victory 100 on Friday, Lugo pushed his win total over the century mark by taking out Alex Hrisopoulos at 149 pounds. The Hawkeye senior opened with a pair of takedowns in the first period and added a point in the second with an escape. He was able to tack on another takedown in the third, winning by the final score of 8-3.

It was a workmanlike win for Kaleb Young against #15 Jake Tucker to secure a 6-2 win. Young jumped out to a 4-1 lead with two takedowns in the first period. He added points with a second period escape and another for riding time.

We did not see All-American Alex Marinelli take the mat for the Hawkeyes at 165 pounds, instead, it was senior Jeremiah Moody who got the call against Austin Hiles. Moody got off to a strong start tossing Hiles to his back and ended up 6-1 after the first period. He traded takedowns with Hiles in the second period and a third period escape for Moody led to the 9-5 final.

Iowa got more bonus in the dual out of Michael Kemerer, who secured a 13-3 win at 174 pounds. The All-American wrestler scored two takedowns in the first period and then added one in the second and third periods, accompanied by a four point nearfall turn to pick up the big win over Layne Malczewski.

In the dual’s marquee meeting Michigan State managed to get on the board as Cam Caffey took a 3-2 decision from Abe Assad at 184 pounds. After a scoreless first period, Caffey got an escape and takedown to go up 3-1. Assad got an escape in the third, and was threatening late, but Caffey was able to scramble out of several compromising positions to avoid giving up the score.

Jacob Warner followed up with a 5-2 decision from Nick May at 197. The Hawkeye sophomore notched to first period takedowns and added an escape in the second period.

Iowa won their third bout by bonus after freshman Tony Cassioppi blanked Christian Rebottaro in the final bout of the dual. Cassioppi took a 2-0 lead after the first period which was also when picked up his first stall warning. The freshman heavyweight added four points in the second and third periods to win comfortably 10-0.

Up next for Iowa will be a return to the Great Lake State to take on #18 Michigan on Saturday. Over the past several weeks the Wolverines have made several moves to strengthen their squad which include pulling a redshirt off one of their talented true freshmen and taking another member of their squad out of an Olympic redshirt. We’ll have more this week to break down the dual.