Iowa Remains Unbeaten at Home with Win over Penn State 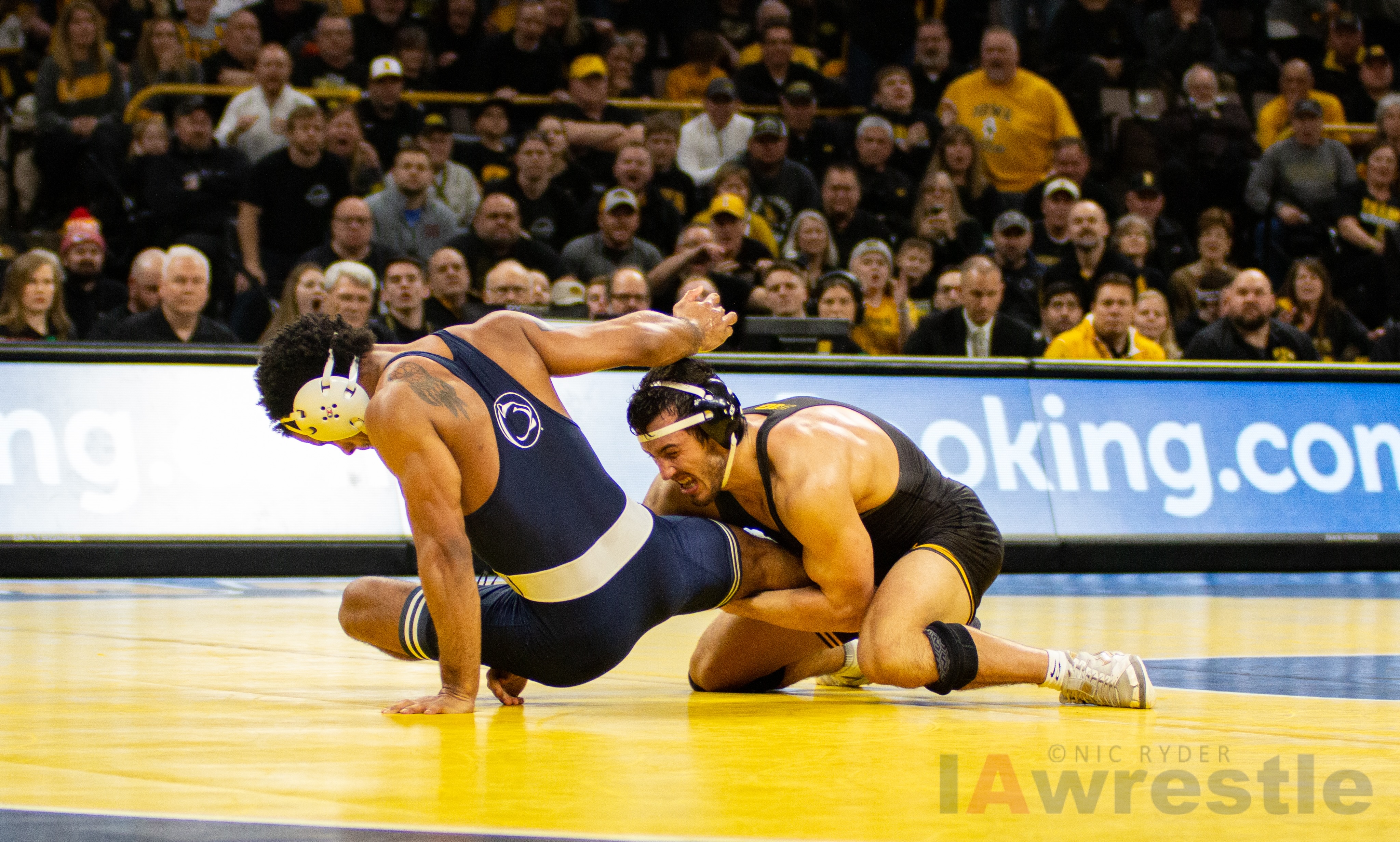 The dual of the year certainly delivered as #1 ranked Iowa held off #3 Penn State to claim a 19-17 win over their Big Ten conference foe. It was dual fueled by upsets and (particularly in the second half of the dual) a major emphasis on upper-body throws. In the end, Iowa claimed victories at 125, 149, 157, 174, 197, and heavyweight.

The dual began at 125 pounds where Spencer Lee attacked off the whistle and took Brandon Meredith down to his back for a quick four points. He then released his Penn State opponent for another takedown and nearfall turn and picked up another four point turn to go up 14-1 to end the first period. They started neutral to begin the second period and a quick takedown led to the match terminating score, 16-1.

Things took an odd turn after the 133-pound bout where Hawkeye wrestler Austin DeSanto had to injury default out of his match against #3 Roman Bravo-Young. After getting to Bravo-Young’s legs early but took an injury to his knee which put him into injury time. DeSanto got up from the mat and indicated he was okay to return to wrestling but after a minute of wrestling, he later signaled he was no longer able to continue. During his first time out Terry Brands went out on to the mat and spoke to the official, and the ref later docked Iowa a team point.

With no Max Murin in the lineup, the Hawkeyes turned to junior Carter Happel to man the 141-pound spot against Nick Lee. It was the second straight top-ranked opponent for Happel, who fell by technical fall, 20-5.

Iowa took two straight to head into intermission after Kaleb Youngs 6-1 win over Bo Pipher at 157 pounds. Young struck for a takedown in the first period and added a reversal to start the second to go up 4-0.  Young got a point in the third period following a second stall call against Pipher and then another point was added for riding time.

The second half of the dual kicked off with the first of two matches featuring the top two ranked wrestlers. The first period between Alex Marinelli and Vincenzo Joseph had plenty of excitement as both wrestlers were willing to tie up and look for a big move throw to get on the board. The period ended scoreless despite all fo the action.

After an escape by Marinelli, the upper body tie-ups continued with Joseph managing to launch Marinelli to his back for a six point score. After bloodtime forced a restart Marinelli was able to slip Joseph on top and reversed Joseph to end the second period. He was unable to come from behind and ultimately fell to the higher-ranked wrestler.

The second top-ranked meeting between Michael Kemerer and Mark Hall also started with a bang as Hall tried to launch Kemerer to his back, but the Hawkeye managed to roll through and maintain the leg and finished with a takedown. Hall was able to reverse Kemerer, but the Hawkeye managed to get a quick escape and retake the lead, and Hall finished a low-level attack to go up 4-3. Kemerer finished the period with a reversal and 5-4 lead.

Things knotted up in the second period after Hall got an escape, but Kemerer was able to strike for another takedown. Hall nabbed a quick escape and the period ended up with Kemerer up 7-6.

In the final period, Kemerer was out for a quick escape. Hall hit a low-level ankle pick, but Kemerer scrambled out of it and nearly score. After a statemate, Kemerer caught Hall flatfooted and took down the three-time NCAA finalist to ice the match, 11-6.

In keeping with the throwing theme, Iowa freshman Abe Assad came out headhunting in the first period and threw Aaron Brooks in a headlock, but the Penn State wrestler was able to roll through it and come out on top with a takedown. After an escape, Brooks picked up two more points off a takedown to end the period.

Assad got an escape in the second which was the only score of the period. In the final period, Brooks reversed Assad to begin the period and released Assad to go to their feet. With over two minutes of riding time, Brooks won by the final score of 7-3.

Jacob Warner put his team within striking distance with a win at 197 pounds over Shakur Rasheed. Warner came out with an early takedown and racked up over a minute and a half of riding time before the Nittany Lion wrestler was able to escape. The match was tied early in the second period after Rasheed got a quick escape, and Warner got an escape of his own in the third to seal the victory.

With the dual on the line, Iowa freshman Tony Cassioppi came out needing just a decision against Seth Nevills to bring his team to victory. The Hawkeye wrestler came out shooting, but it was Nevills who managed to get to bring Cassioppi’s leg to his feet. The freshman maintained composure and displayed an impressive level of athletism to come out on top of the exchange with a takedown.

Nevills elected neutral in the second, which led to a period of no scoring. Cassioppi got an escape and takedown in the third to win the match, 7-0.

Up next will be a road trip to Michigan where the Hawkeyes will take on the Michigan State Spartans in a Sunday 2:00 PM (CT) dual.