Hawkeyes Close Out Road Schedule with Win Over Michigan 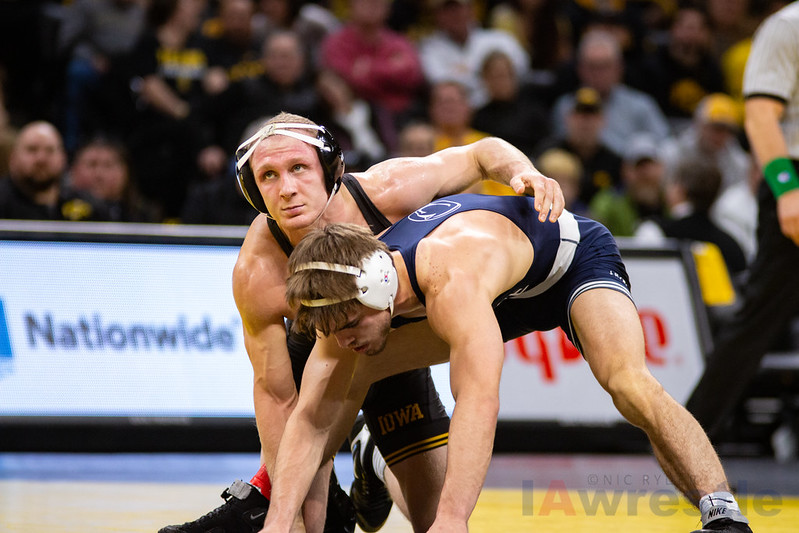 The Iowa Hawkeyes capped off their last road dual of the season with a big 27-9-victory over the #17 ranked Michigan Wolverines. The Hawks took eight of ten bouts on the evening, including two of the top ten battles.

The dual kicked off with a ranked meeting between #1 Spencer Lee and #19 Jack Medley. Despite Lee jumping out to his typical, quick first period takedown for the first time this season the Hawkeye walked away without a win by bonus. Lee was able to turn Medley in the first for two points but was held to just four more points over the remaining two periods for the 8-1 win.

Making his second straight start at 133 pounds was Paul Glynn, who looked like he was going to be on the way to another come from behind victory against Joey Silva, but the Wolverine wrestler was able to hold off the late charge. The senior Hawkeye showed plenty of aggressiveness in his bout by getting to Silva’s legs several times, but he was unable to convert any of his shot attempts until the third period. Despite his late charge, Glynn fell 6-5.

After a scoreless first period, Carter Happel got on the board with an escape in the second period followed by a takedown against Cole Mattin. The Michigan wrestler got an escape to close the lead to 3-1 going into the final period.  In the third, Happel tacked a pair of takedowns on to win his match, 7-4.

In the first top ten ranked head-to-head meeting, it was PatLugo who came out victorious with a tight win over Kanen Storr. After a scoreless first period, Lugo got an escape in the second to score the only point in regulation. Lugo managed to ride Storr for the entire third period to tack on riding time to finish with the 2-0 win.

It was a workmanlike win in the second top ten match of the evening as Kaleb Young scored a takedown in every period, and added an escape in the third to win 7-3 over Will Lewan at 157 pounds.

Iowa picked up a head of steam after Alex Marinelli and Michael Kemerer each posted a bonus win. At 165, Alex Marinelli racked up four first period takedowns en route to his major decision against Reece Hughes. Kemerer followed suit with a technical fall at 174 pounds against Max Maylor.

One of the bigger surprises was the decision to start senior Cash Wilcke at 184 pounds after it appeared that Abe Assad had taken over the starting duties almost a month ago. His first period against #20 Jelani Embree was scoreless, but he got an escape and immediate takedown in the second period, which proved to be all he would need to defeat the Wolverine wrestler. Wilcke held on to win 3-2.

Winning comfortably at 197 was Jacob Warner who jumped out to a takedown followed by a rideout to end the first period up 2-0. The Hawkeye sophomore extended his lead with an escape in the second period and accumulated nearly two minutes of riding time to win 4-1.

That set up the bout of the evening between #3 Tony Cassioppi against Michigan’s #3 Mason Parris, who came out firing with a takedown early in the first period. After Parris looked like he was going to walk an armbar over Cassioppi’s head to take the Hawkeye to his back Cassioppi was able to roll through for a reversal. Parris was able to get an escape and score a takedown off a Cassioppi shot to lead 5-3 after the first period.

Up next the Hawkeyes will return home where they will finish out their regular season schedule. Next weekend they welcome in Minnesota for a border battle, followed by their annual contest with Big 12 power Oklahoma State to close out their dual slate.