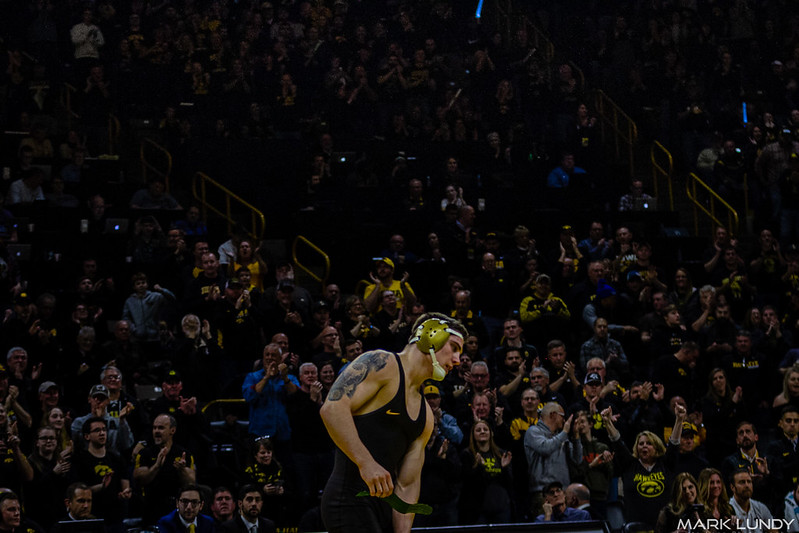 The University of Iowa is headed for some record territory this season. It’s no secret that Iowa fans love wrestling, and they love to watch their team compete in Carver-Hawkeye Arena. This is highlighted by the fact that the Hawkeyes have led the nation in average dual attendance 13 seasons running. When the team’s schedule was released last summer the lineup was drool-worthy. Not only did Iowa draw five of the best Big Ten teams in their home lineup, but it also fell on a year where Big 12 rival Oklahoma State was also scheduled to come to Iowa City.

The only thing standing in the way from a perfect home schedule was not having in-state rival Iowa State as a home match (instead that match will likely be the highest attended dual for the Cyclones this season).

To date, Iowa is averaging an eye-popping 11,839 fans per dual with three more big ones yet to occur. For a frame of reference over the last four years, Iowa has averaged anywhere from 8,300 to 9,000 fans (rounded), with the exceptions being 2016’s breakout year of 12,166. That was the season of the famous Grapple on the Gridiron, which saw 40,000 plus fans watch Iowa’s dual against Oklahoma State inside Kinnick Stadium. The other being Iowa’s 2017 slate which included a lot of familiar names we saw travel to Carver this season – Penn State, Ohio State, Nebraska, and Wisconsin.

Take that in for a moment. Normally Iowa leads the nation with less than 9,000 fans per dual in attendance. This season they have a chance to beat their 2016 average attendance which included one of their events where they had more than forty thousand fans at a single event.

During last weekend’s dual against Ohio State it was announced that 13,405 fans were in attendance, and according to the University of Iowa, that is the 13th largest crowd inside Carver. The University has also announced that this weekend’s contest against Penn State is sold out. According to Wikipedia Carver’s capacity is set at 15,056 (though Think Iowa City lists that capacity at 15,500 on their website). Assuming the lower of the two numbers, Iowa’s average attendance can pop up to 12,482 after this weekend.

“I don’t like to speak for our guys, but I think a lot of them wrestle an exciting style and it was important to them in the recruiting process to put their skills on display in front of the biggest and best fan base in the country.” Assistant coach Ryan Morningstar told IAwrestle, “Having that fan base dual after dual, even on the road is special.”

From there Iowa will have two more big home duals remaining on their schedule. At this point predicting attendance is purely speculative and there are a variety of factors that need to be considered, like the weather being the most obvious outside influence on attendance. There is also the fact to consider that the Oklahoma State dual falls on the same weekend a lot of fans will be in Des Moines for the high school state tournament.

But to have a little bit of fun, and why not speculate there’s really no harm in doing so, Iowa could potentially beat their 2015-16 output. Assuming 15,056 for Penn State and 10,000 for both Minnesota and Oklahoma State the average per dual would be 11,773. Highly impressive but not what is needed.

Inflating the Minnesota and Oklahoma State duals to 11,000 and Iowa is just short with 12,059. Iowa would need about an average of 800 more fans total (to keep numbers round) between the last three duals to beat that 2016 mark.

The last question would be is expecting 10,000 or more fans against Minnesota and Oklahoma State probable? I think so. Iowa’s last two duals at home versus Minnesota brought in 9,335 and 11,174 respectively. Iowa drew 10,466 fans against Tennessee-Chattanooga, and given Iowa’s history with Minnesota, this dual is a considerably more attractive matchup.

Likewise, the Oklahoma State is traditionally one of Iowa’s better draws when they appear on the home schedule – which no doubt played into why they were selected for the dual that occurred in Kinnick. The last time the Cowboys wrestling in Carver Iowa drew 13,485 (2018).

With that in mind, it seems very plausible that Iowa can beat the impressive high watermark set back in 2016 and given the amount of fan interest we’ve seen already, outperforming the relatively modest used above isn’t out of the question.

One thought on “Iowa Home Attendance at a Record Setting Pace”