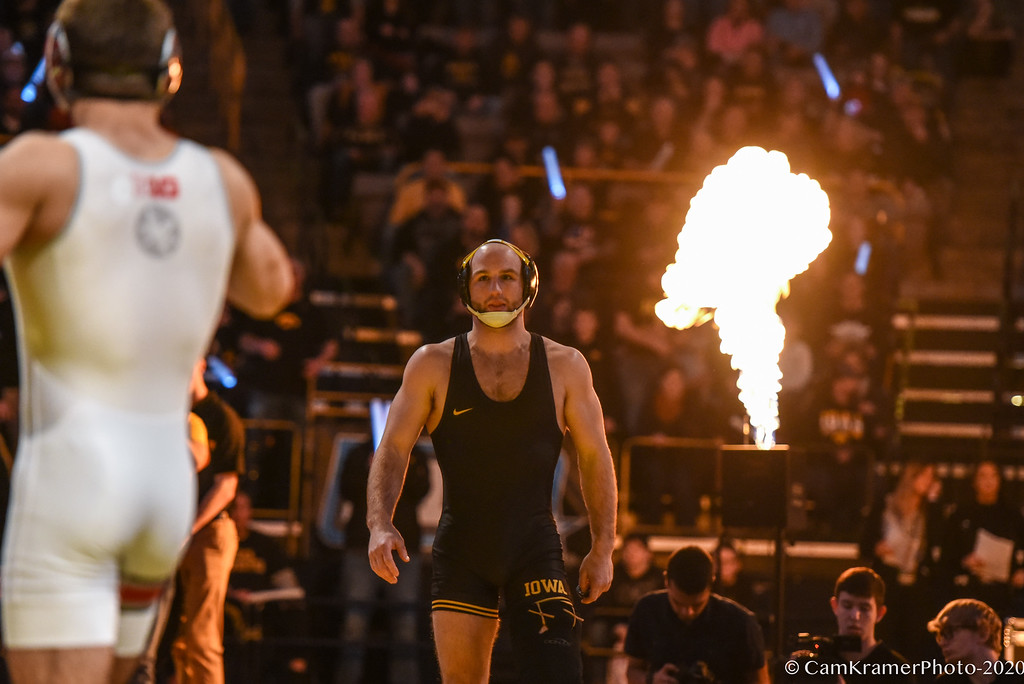 Iowa’s ridiculous run of top-flight competition is nearing a reprieve, but before that happens they will still need to get through #3 ranked Penn State, who is coming off of a tight victory over #8 Nebraska this past weekend. This will be the Hawkeyes third straight dual against a top ten opponent, and to no surprise, all of these duals have been broadcast on the Big Ten Network. Another unsurprising fact is that this dual was sold out a month ago.

So far the Hawks have managed this tough stretch of the season particularly well winning 26-6 against Nebraska, and then 24-10 against Ohio State last weekend. In the second dual, they were without starters Max Murin and Jacob Warner, and in his post-dual press conference, Tom Brands indicated that Murin is questionable for the dual against Penn State this weekend.

Even in a year in which the Nittany Lions don’t come into the matchup with the top-ranked billing, Iowa will want to have as much firepower as possible to continue their currently perfect record. Despite the fact this dual is sold out and there is little doubt that Iowa will want to win this dual, there is no question that Brands will opt to put what is best for his team in March, so if any of the regular starters do not appear this Friday it will be for that reason.

This dual features a lot of big head-to-head matches, including the potential to see a battle between the top two ranked wrestlers at two weight classes and a meeting of top ten wrestlers at two other weights.

The two headliners could be back-to-back in this dual at 165 and 174 pounds. Most notably Alex Marinelli is 2-0 against Vincenzo Joseph, but given their finishes at the NCAA tournament, the Nittany Lion wrestler holds the ranking advantage. Additionally, Marinelli is unbeaten on his home mat, which may not tell the whole story, but is certainly noteworthy coming into a match like this.

The other big match would be between Mark Hall against Michael Kemerer in a match that could have some pretty steep implications toward the end of the season as these two are viewed as some of the top wrestlers at this weight. It’s potentially a landmark victory for the Hawkeye wrestler, and Hall has been wrestling at a high level, coming off a pin over #6 Mikey Labriola in the last dual.

The other big ranked head-to-heads are at 133 and 184 pounds. The two with a history against one another are the former pairing, Austin DeSanto and Roman Bravo-Young, with the Hawkeye carrying a 2-0 record from last season. The other is a meeting between two true freshman Abe Assad and Aaron Brooks.

Bonus points will also be at a premium in this dual. Fans have already been witnessing an incredible season from Spencer Lee at 125 pounds outscoring his opponents 84-1 in his last five matches. Almost every match in this dual has upset potential, so even knowing that Iowa carries a 7-3 advantage in the rankings, this dual has the potential to be a lot closer than wrestling it on paper.