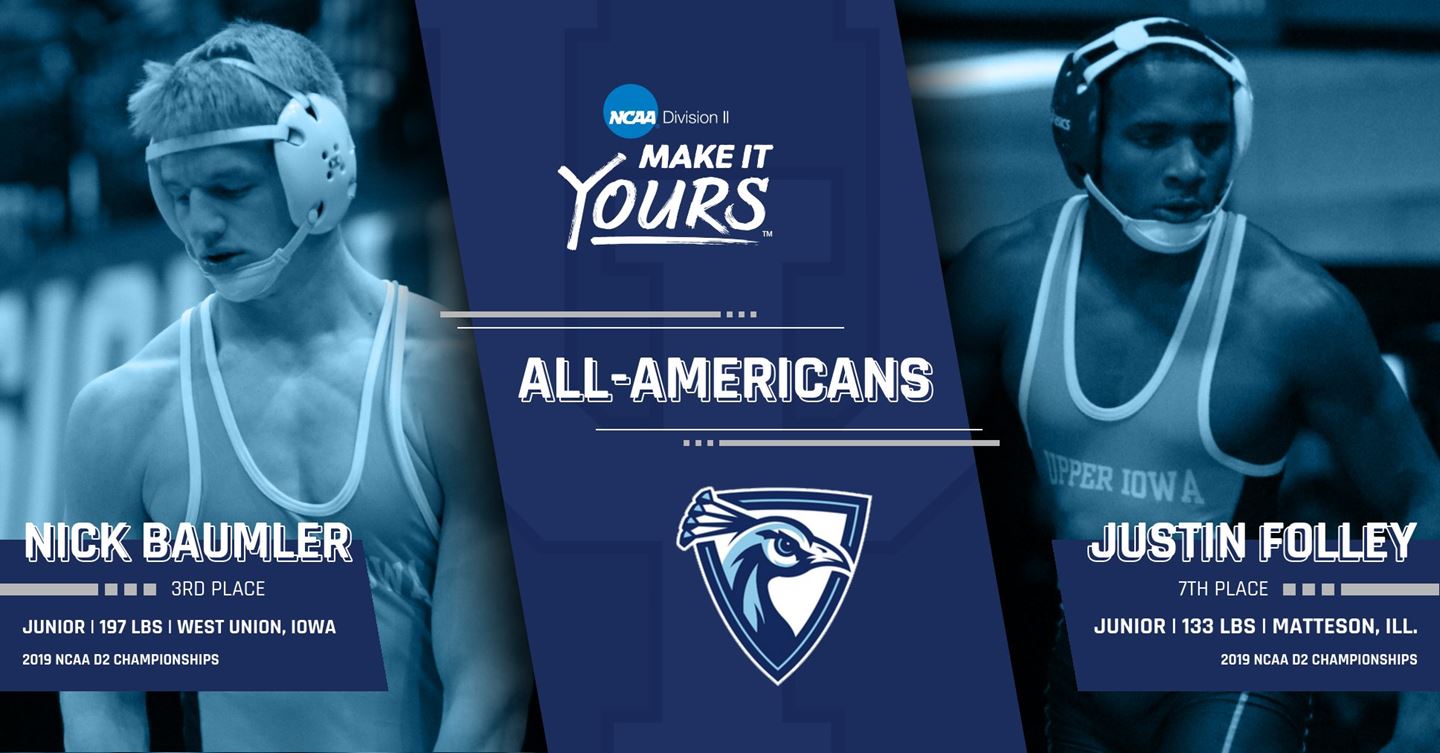 Nick Baumler and Justin Folley combined to win four of their five matches on Saturday to lead Upper Iowa into 15th place after Session III at the 2019 NCAA Division II Wrestling Championships in Cleveland, Ohio. Baumler (197) claimed third place in the nation with a perfect 3-0 day, while Folley (133) earned seventh place in the country splitting his two matches.

As a team, Upper Iowa scored 22.5 points at the championships with just the weight class finals to go tonight in Session IV. St. Cloud State University leads the field with 95.5 points, while Wheeling Jesuit University leads a tight race for second place with 79.5 points. McKendree University and Notre Dame College are also vying for an NCAA trophy with 79 and 72.5 points, respectively.

Baumler, who placed seventh at the 2018 NCAA Division II Championships, claimed third place in Cleveland thanks to a 3-0 record on Saturday. UIU’s junior 197-pounder opened his day with a 7-6 decision over Ryan Vasbinder of McKendree University and followed it up with a 3-2 decision over Colton Dull of Millersville University to reach the third place match. In his last match of the season, Baumler improved to 26-8 with a 5-2 decision over fellow NSIC-foe Clayton Wahlstrom of Augustana University to take third place. The West Union, Iowa native used a pair of takedowns and an escape to fuel his win and post a 5-1 record at the championships.

Folley, who finished the season with a 31-9 record, opened Saturday with a 9-4 loss to Jordan Gurrola of San Francisco State dropping into the seventh place match. UIU’s junior 133-pounder wrapped up his 2018-19 campaign the right way with an 8-3 decision over Alexis Soriano of Mercyhurst. Folley trailed early in the placing match, but rallied and tied the match 3-3 when Soriano was called for a second stall. Folley put a stamp on the match with a takedown, two nearfall points and a ride time point in the final minute.

Session IV will begin at 7 p.m. ET (6 p.m. CT) on Saturday night. Upper Iowa’s Folley and Baumler will participate in the Parade of All-Americans prior to Session IV on Saturday night and take their place on the podium during the finals matches.