John Henrich Quietly One of the Best Wrestlers in Iowa 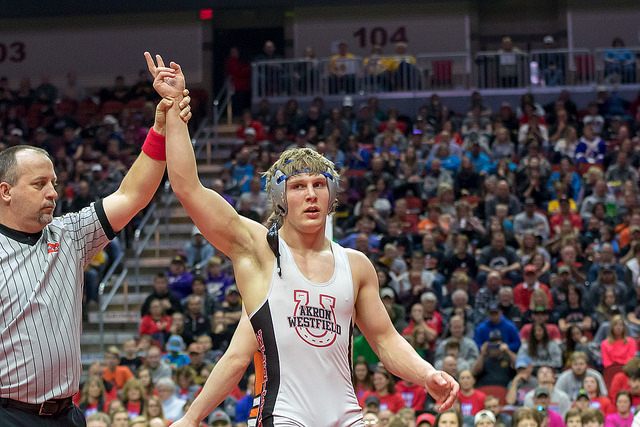 You probably haven’t heard of John Henrich. Or if you have you probably don’t know much about him.

Wrestling for Akron-Westfield high school, in Iowa’s smallest class, in the northwestern part of the state, Henrich doesn’t receive a lot of the attention his peers in eastern or central Iowa typically garner. Potentially one of the best wrestlers in grade, in a state that regularly produces stars on the college level, it seems strange for a wrestler of Henrich’s caliber to go unnoticed.

But truth be told, Henrich kind of likes it that way.

Earlier this month the Des Moines Register identified the the Top Eight Wrestlers to Watch in the 2019 class. Absent from the list was Henrich. That’s not a knock against the Register’s opinion. We certainly understand Cody Goodwin’s, author of the list, predicament of narrowing down the list to eight (see our Top 10 here). But the fact that a two-time Iowa high school state champion was absent the list goes a long way in driving home our point. Even as good as Henrich is, it often times seems as though he is overlooked.

To be fair to most of those in the state unaware of Henrich, his ascension to the top of the 2019 class came during a stretch of time where a lot of his peers in his grade were overshadowed by the class of 2018. With names like Brody Teske, Alex Thomsen, Michael Blockhus, and Joel Shapiro dominating headlines, its been tough for a lot of these younger names to break through.

Now that the field has been cleared, and the class of 2018 has officially graduated, many will take notice at just how good the wrestlers are – including our story’s hero John Henrich.

For roughly the first 15 years of Henrich’s life he was a resident of South Dakota. Born in Rapid City, South Dakota, the Henrich family made the decision to move to Iowa prior to the start of the 2016-17 school year. His father, Brad, grew up in Akron and his father’s family still lives in the town. In the fall of 2016 John’s mother Michelle accepted a new job in the Sioux City school district that allowed his father to move back to his hometown.

Even though Henrich moved into the wrestling crazed state of Iowa, he was leaving one of South Dakota’s larger programs (Rapid City Stevens) for small town Iowa.

“The transition was not the wrestling in my mind,” Henrich told IAwrestle, “It was adjusting to new coaches and a new setting. I was used to a four mat wrestling room and coaches and how they coach. When I came here it was a three quarters mat and coaches who love the sport and are the same frame of mind as my old ones, which helped me adjust and pushed me to be great.”

Whatever adjustments Henrich needed to make, he adapted quickly. Since stepping on the mat in the Akron-Westfield singlet Henrich has an unblemished record compiling a 43 win sophomore season followed by his 44 win campaign as a junior. Being out in the western part of the state the first opportunity fans really got to see Henrich in action was the 2017 state championships.

“It felt like the work and the years of getting whooped up on paid off.” Henrich said of the feeling after winning his first state title, “My coaches were a great big part of that. They put me with the right partners to teach me as well as push me past my limits. As soon as I walked back into the curtains I realized I have achieved a goal that took me four years to complete and now I wanted three of them. So I have set out to do just that.”

You read the quote from Henrich correctly. His win in the 2017 state finals was the wrestler’s fourth attempt at winning a title. Unlike Iowa, South Dakota allows wrestlers in seventh and eighth grade to compete at the varsity level. Prior to moving to Iowa, Henrich had competed at three high school state tournaments for Rapid City Stevens, earning third place medals as a seventh grader and freshman.

According to Henrich wrestling against that older, tougher competition in middle school played a vital role in the wrestler he is today.

“I believe the only reason I am at the level I am at is because I went and wrestled with people who would throw me across the mat left and right. It was a huge jump but I gained confidence when I beat kids way above my age.

“The first tournament I wrestled I had no idea how close I was to being successful at that level. I grew closer and closer to being a kid who’s name was known. With the confidence came my physical conditioning. I trained like I belonged to a top notch high school team. The more mat time I got with high quality opponents only taught me more and more.”

All of that experience at a young age in South Dakota certainly looks to be paying dividends for Henrich now. Not only is he a two-time state champion, but each summer our own Lars Underbakke releases a set of rankings known as the Fab 50. The list orders the state’s top 50 prep wrestlers regardless of weight or grade. In the latest release, Henrich was tabbed as the state’s #7 overall wrestler.

That’s some high praise for a wrestler who describes himself as “just a South Dakota kid”.

“I love being under the radar.” Henrich said when asked if he notices his accolades tend to receive less attention, “I was just a seventh grader wrestling varsity at one point and now I am just a South Dakota kid who wrestles in Northwest Iowa.”

Making Henrich’s accomplishments even more impressive is the fact that the wrestler has competed through a couple different afflictions going back to his freshman year. Injuries to both his knee and shoulder have prevented Henrich from being at one hundred percent, though he also recognizes that almost every wrestler is dealing with some sort of issue near the end of the season.

“My youth coach and one of my role models Travis King said there is a difference between being hurt and being injured. Hurt is painful but you can still compete and fight through it to achieve what you set out to do. Injured is when you are unable to compete. You can call them injuries but I believe that it’s part of the game.

“Injuries have taught me two things. The first is that nothing can stop your mind. It’s a major part of our sport and a big part of why I am successful. Second, that there are alternative ways to work out. You can cut trees down with an ax if you have bad knees or sit on a bike if your shoulders are busted up. Knowing my body and learning how I need to train. If I can’t wrestle I can condition so I can mentally break my opponents.”

The injuries to Henrich have done little to slow either of his state title runs over the past couple seasons, but they have taken their toll in another way. One consequence of Henrich’s offseason recovery means no summer wrestling. No summer wrestling means less opportunities to compete for a national title and perhaps maybe more importantly for his future, less exposure for college coaches to take notice.

“It is definitely hard to get exposure to big name colleges not wrestling (in the summer). I will tell you it sure makes a kid hungry to compete again. It’s the sitting in study hall watching Flowrestling or going over matches mentally in your head that you can learn to love about the sport. It never stops and there are endless ways to improve.”

While its been more difficult for Henrich to draw attention since he’s had to miss out on the summer circuit, that’s not to say Henrich is without interest from coaches on the Division I level. Over the past year he has received interest from several programs in the Big Ten and Big 12 conference. Projecting at 165 pounds and up Henrich will be an attractive middleweight recruit once the recruitment of the 2019 class really picks up the pace in the middle of the summer.

In the meantime Henrich will continue his role as the little known wrestler from western Iowa hoping to win his third straight state title. You probably don’t know much about John Henrich, but he kind of likes it that way.