Top Freshmen to Watch For at the 2018 State Tournament 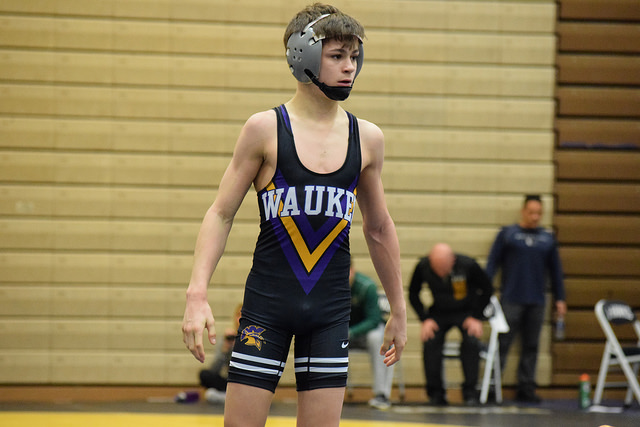 Every year at this time new stars in our sport are born. Before Alex Thomsen and Brody Teske were eyeing their chance at joining the history books as four-time state champions they were the new kids on the block looking make their mark. Last year was no exception either as we saw three freshmen claim state titles – Mason City’s Cullan Schriever, West Sioux’s Adam Allard, and Lisbon’s Cael Happel – and many other freshmen earn the first of potentially many state medals.

Earlier this week we highlighted several major storylines that will take place this weekend at the state tournament, and for most of those individuals their stories began with what they were able to achieve as freshmen. With that in mind we take a look at several of our sport’s freshmen, who are primed to enter the spotlight this weekend.

In Class 1A there are four wrestlers that carried a top five ranking into the postseason, but as this sport has taught us rankings don’t mean everything. Of that group of four, only three wrestlers made it to Des Moines.

The highest rated 1A freshman comes out of Woodbury Central with a 44-2 record, #2 Beau Klingensmith. In the rankings we see Klingensmith sandwiched between two solid veterans at this weight #1 Jaymus Wilson of Alburnett and #3 Dan Kimball of Don Bosco. Klingensmith has the perceived easier path than his fellow freshman Donavon Hanson, as Klingensmith would not have to face Kimball unless both wrestlers reach the semifinals.

Hailing from Manson, NW Webster with a 30-1 record, Hanson has put together a nice season that has deservedly earned him the #4 ranking. Unfortunately the talented freshman will need to be sharp early, as he is set to face #1 Wilson in round one. You can read more on our must watch first round matchups here.

Only one other top five freshman qualified for the state tournament, and that was Logan-Magnolia’s Briar Reisz who comes in #4 at 113 pounds. Like Hanson, Reisz will need to be ready to go straight away as he opens his tournament with #8 ranked Caiden Jones of Lake Mills.

Class 2A resembles Class 1A in that all of the freshmen ranked in the top five come at either 106 or 113 pounds. Two of the five wrestlers come from the same high school, Matthew Lewis and Nathaniel Genobana who combined won 66 matches for Centerville, and they will both look to add to that this weekend.

There are three freshmen in the top five at 106 pounds, and all three find themselves in the same half of the bracket. Perhaps the most unfortunate fact is that we will see #2 Lewis take on #3 Keaton Zeimet of Central DeWitt right away (more on that match specifically here). Amazingly these two have lost a combined three matches this season, with one of Lewis’s losses coming to the #1 ranked Jarod Kadel of Columbus Community. It’s unfortunate that loss happened at districts, which meant Lewis had to face a district champion (Zeimet) in round one.

It’s not a whole lot easier for Osage’s #4 Averee Abben, who will take on Kuemper Catholic’s #7 Benjamin Schmitz in round one and #10 Mason Hill of Cherokee, Washington also in his quarterfinal bracket.

At 113 pounds we see both #3 Kain Luensman of Monticello and #4 Genobana on the same side of the bracket. One of the more incredible facts about Luensman’s 47-1 record is that the freshman’s only loss came very early in the season up at 126 pounds. Since then he has been perfect. He opens with the #5 ranked Brody Beck of Grinnell (more on that meeting here) and as mentioned is on a collision course to meet Genobana in the semifinals. Genobana got a bit more of a favorable draw only having #10 Remington Hanson of Clarion-Goldfield (another freshman) as the only other ranked wrestler in his quarterfinal.

As we head to our final group of freshmen in Class 3A we see five really talented freshmen with a top five ranking. Unlike 1A or 2A, this class is the only one to have a a top five freshmen not at 106 or 113 pounds (and there are two of them).

Starting at 106 we see #2 Drake Ayala of Fort Dodge and #4 Lucas Uliano of Waukee highlight our top wrestlers. Coming into this weekend Ayala is 38-1 with that only loss being to sophomore Cullan Schriever, who is the returning state champion at this weight class. Uliano has had a solid season for Waukee, but given Ayala’s success on the national stage and during the regular season has been a bit overshadowed. Both Ayala and Uliano are the favorites to reach the semifinals on the bottom side of the bracket.

The only freshman in the entire state to carry a #1 ranking is Ankeny’s Caleb Rathjen, who is the top dog at 113 pounds. At state there isn’t a truly favorable drawa, but both #2 Nick Oldham of Valley-WDM and #4 Carson Taylor of Fort Dodge are on the opposite side, while #3 Dillon Gottschalk of Dubuque Hempstead isn’t likely to meet the freshman until the semifinals.

Finally we have two top five freshmen at 132 pounds #4 Caleb Corbin of Valley – WDM and #5 Graham Gambrall of Iowa City West. Unfortunatley these two are scheduled to meet in round one (more on that matchup here) although the bright side is both are on the opposite side of #1 Zach Price of Johnston and #2 Drew Bennett of Fort Dodge.

Unranked Wrestlers that Placed at State

2018 3A State Tournament Points by District