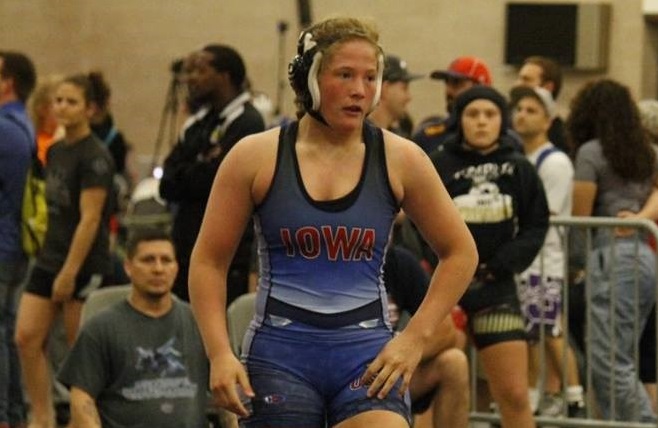 For all but a select few wrestlers who punched their ticket to the state tournament, the past week marked the end of the 2016-2017 season. There were no females who qualified for state but several were part of regional dual teams and also took part in individual district competition. While this is the end of the road for this season, it is exciting to note that every one of these featured wrestlers will be back next year!

1A Regional Duals at Don Bosco-Gilbertville

2A Regional Duals at Denver-Tripoli

Ciana Sonberg, a 160 pound junior from Charles City picked up a 6-2 decision over Brandon Matland of Denver-Tripoli. Charles City went on to finish the dual with a 15-66 loss and will not continue to the state duals. Sonberg finished the season with a varsity record of 2-7 and JV record of 6-1.

Felicity Taylor faced #1 ranked, 106 pound sophomore Jaymus Wilson of Alburnett in the semi-final round. Taylor gave up a 4-12 decision and continued on to meet Heath Moyer of North Linn for the second time that week. Taylor lost by 5-7 decision, taking 4th in District 6. Taylor finished the season with a varsity record of 34-11.

Alaina Sunlin, a 106 pound freshman from Monticello faced #3 ranked, Will Esmoil of West Liberty where she lost by fall. In Sunlin’s next match she lost by 0-16 techfall to Trenton McDonough of Davenport, Assumption. Sunlin finished 4th in District 6 and finished the season with a varsity record of 16-22. Sunlin’s JV record stands at 3-8.

Tateum Park, a freshman from Davenport-North started the day with a solid 12-3 major decision over Kuinton Middugh of Muscatine at 113 pounds. Park went on to meet #4 ranked Jacob Schipper of North Scott where she took a loss by fall. In the final round, Park gave up a 2-5 decision to Ian Taylor of Burlington, placing her 4th in District 6. Park ended the season with a 24-15 varsity record and 1-0 for JV.