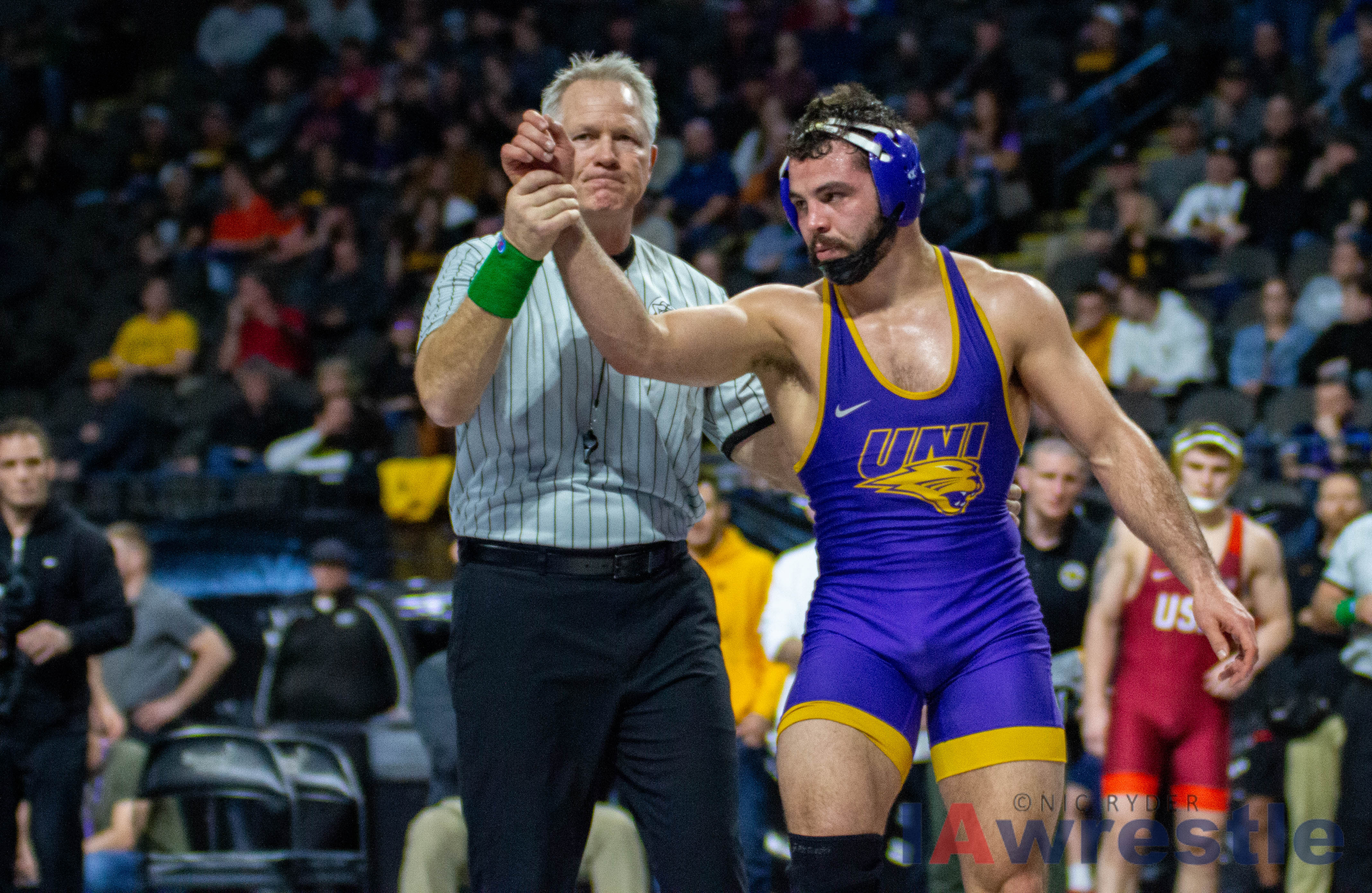 Saturday night the #10 Oklahoma State Cowboys come to Cedar Falls for the first time since UNI joined the Big 12 conference in 2017. The previous two seasons the Panthers have travelled down to Oklahoma State without much success in either season.

They’ll look to turn that around as the home location swings north, but the home gym swings a little more to the west. This will be the first home dual that UNI has hosted in the McLeod Center since the 2016-17 season when their dual with Oklahoma was from the larger arena; a 27-13 Sooner win in front of 2,084 fans.

Not only does this year’s iteration of the Panthers hope for a better result, they’re also hoping for more fans to fill McLeod. It was a cavernous experience last time, just without the dampness of an actual cave. UNI may have sold over 2,000 tickets, but it felt like maybe 1,500 were there. And while there’s hope of putting more people in the stands it seems doubtful that tickets will be hard to get.

As for the dual itself this is the biggest conference home dual that UNI has hosted since, well, maybe the Iowa State dual last season. Everybody forgets that ISU was ranked #12 going into that dual and while I thought the Panthers should be favored, nobody else seemed to. The UNI/ISU rivalry still seems a little bit odd to call a conference dual, but it has been going on three years now.

Anyway, enough about the past, what can we expect in McLeod Saturday night?

Well more than a few UNI wrestlers are going to have to do what Doug Schwab’s been saying all season: beat a guy they’re not supposed to. Coming up right away with that is at 125 pounds with Jay Schwarm taking on #4 Nick Piccininni. Schwarm is 0-2 against the Cowboy, with both losses coming with bonus points against UNI. But as we know Schwarm’s style can lead to sudden changes of fortune…so who knows?

The next two matches are a pair that UNI could “steal.” Whoever goes at 133 for the Panthers will get Reece Witcraft, a guy just on the edge of the rankings in Intermat’s 133 pound poll. While neither Jack Skudlarczyk or Drew Bennett are that close to the rankings, Skudlarczyk has been right there nearly the entire season and could upset the Cowboy.

One of the matches of the night comes at 149 pounds, where #3 Boo Lewallen comes in undefeated against #12 Max Thomsen. Thomsen has taken some unexpected losses this year (he’s 16-6) but nothing would turn that around like a win over Lewallen. Thomsen is 1-2 against him in his career, the only win coming back in 2018 in sudden victory. Lewallen’s wins have come from a pair of decisions, 9-3 and 10-6, both in 2018.

Austin Yant seems to have locked down the 165 pound spot for the Panthers and he’ll his second shot at a top 10-ranked wrestler in a dual this season in #9 Travis Wittlake. Yant first took the mat for the Panthers against Isaiah White during the Nebraska dual, a match he lost 13-5. While Yant has improved since then, this would be a monumental upset for UNI.

The next match of the night could come at 174 pounds, where #5 Bryce Steiert might see #12 Joseph Smith. Steiert and Smith both wrestled in 2016, when they were both at 157 pounds – and that went 6-2 in favor of Smith. But this match probably won’t happen, because like Gfeller, Smith has only wrestled in the Southern Scuffle this season.

Steiert has look really good this season, only losing to Purdue’s Dylan Lydy twice on the year. The Panther will most likely see Andrew Shomers, who Steiert has a win over from last season at 165 pounds.

Taylor Lujan will see Anthony Montalvo, another Cowboy just on the edge of being ranked by Intermat. This would be a great opportunity for UNI to earn bonus points, as we’ve seen Lujan dismantle wrestlers at home this season, including a 15-6 major decision win over then-number-three Taylor Venz from Nebraska.

This match and Carter Isley’s match at heavyweight are the probably the Panther’s best chances of bonus points. OSU heavyweight Austin Harris is just 4-6 on the year, while backup Cornelius Putnam is 0-1.

There’s a big question mark for UNI at 197 pounds, where Jacob Holschlag returned to the mat last weekend in the Panther’s dual against Northern Colorado. While it was good to see him back on the match, Holschlag seemed gassed after the first period and didn’t really look like himself. Granted, he’s wrestling with two huge knee braces on now and that might take some getting used to.

I don’t think Holschlag was ever in the top position last Friday night against Alan Clothier, who was bumping up from 184 pounds to take on the Panther, so we haven’t seen if his top game will be effected by his long layoff. Holschlag’s work from bottom will need to improve though if he expects to return to the medal stand in March.

If Holschlag doesn’t go for the Panthers Saturday, expect backup Noah Glaser on the mat at 197 pounds.

This dual is a big one for a couple of reasons:

1. It’s against Oklahoma State. That shouldn’t need much more explanation.
B. OSU looks as beatable as they have in several years; the Cowboys haven’t dropped a Big 12 dual since the 2013-14 season when they lost 16-15 to Oklahoma and are the seven-time defending Big 12 Champion. If the Panthers want to establish themselves as one of the top teams in the conference rather than chasing second, this is a dual they need to win.

With things the way they stand it will be a tough dual for the Panthers. They’ll have their chance though and we’ll be there to cover it. Follow along for photos and everything else we do on our Twitter accounts and then back here for all the results.