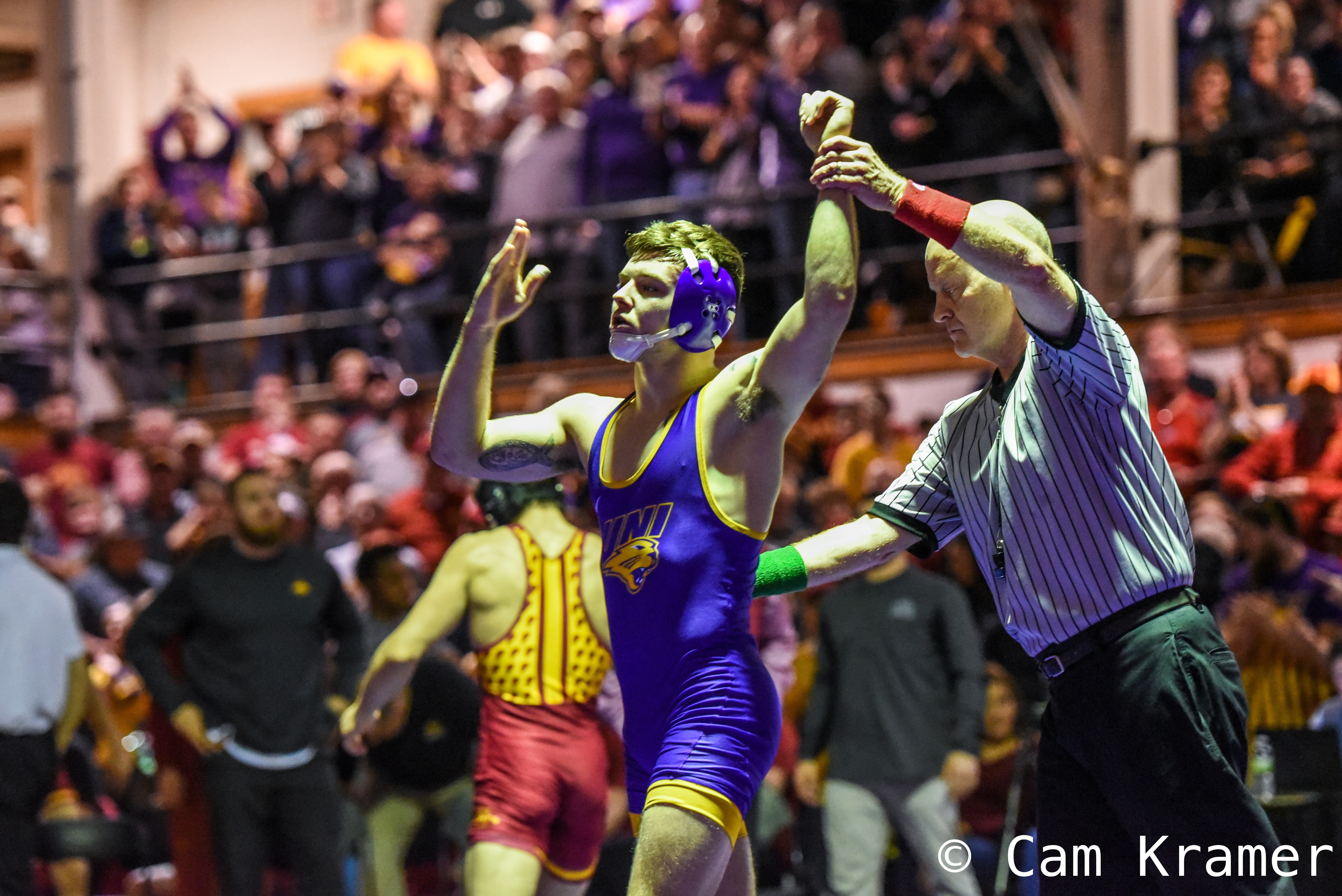 The #17 UNI Panthers closed out their second season of Big 12 wrestling with a second place finish, after closing out their dual with #12 Iowa State 22-13 in Cedar Falls. The win was UNI’s third in a row over the Cyclones and their second in as many years in Cedar Falls, and closed out senior seasons at home for Josh Alber and Drew Foster.

At 125 pounds Jay Schwarm got things started for the Panthers with a 6-3 win over Alex Mackall. Schwarm saw all of his offense come in the first period, with a takedown and reversal to take a 4-3 lead into the third. He earned his other two points on a stall for Mackall and riding time.

Josh Alber had one of the biggest matches of the night and he needed all 420 seconds to come away with the win. Neither he nor Ian Parker could get any shots going through two periods, and after having traded escapes, the score was 1-1 going to the third.

After some half-hearted attempts by both men, Alber finally connected on a low single leg and worked for a while on the edge, getting the takedown with two seconds left in front of a very loud West Gym crowd.

The next “biggest” match of the night came right away at 149 pounds where #10 Max Thomsen took on #13 Jarrett Degen. Thomsen earned a two point nearfall in the first period that turned out to be the difference in the match, as Degen put together an offensive attack in the third period. The nearfall, combined with a takedown each in the first and second periods, led Thomsen to the win.

After intermission Bryce Steiert got things rolling with a 16-1 tech fall over Logan Schumacher. Steiert had just two points after the first period, but scored seven in the second and eight more in the third, putting on a tough ride against Schumacher.

At 174 Taylor Lujan made the West Gym explode with sound, getting a win by pinfall in 6:38 over Iowa State’s Marcus Coleman. Lujan actually trailed in the third period 4-3, before securing another takedown and not giving Coleman the chance to get back in it. Lujan scored eight more points before putting in a terk and working Coleman over for the pinfall.

Carter Isley had UNI’s last win of the night on it’s last chance. After a scoreless first period Isley chose bottom against Iowa State’s Gannon Gremmel, who rode Isley out of the second period. Isley used a ride of his own in the third to neutralize riding time and keep the score 0-0. In the first sudden victory Isley hit a single leg and, after Gremmel rolled initially, doubled him off for the takedown and the win.

The only Cyclone upset came at 184 pounds, where #18 Sammy Colbray used a key third period takedown to defeat #5 Drew Foster. Colbray led for most of the match, but Foster had a takedown in the third and, after a Colbray escape, tied the match at four. Colbray had his offense going though, and connected on a shot to score the go-ahead points in the match. He’d add another takedown off a poor Foster shot as time was running out.

The Panthers finish the season 7-5 overall and 7-1 in the Big 12, good for second place in the conference. UNI is off until the Big 12 tournament, which takes place in Tulsa, Oklahoma, in two weeks. Iowa state drops to 10-3 overall, and 6-2 in the Big 12. They’ll take on Missouri in Hilton Coliseum on Sunday for their senior day.