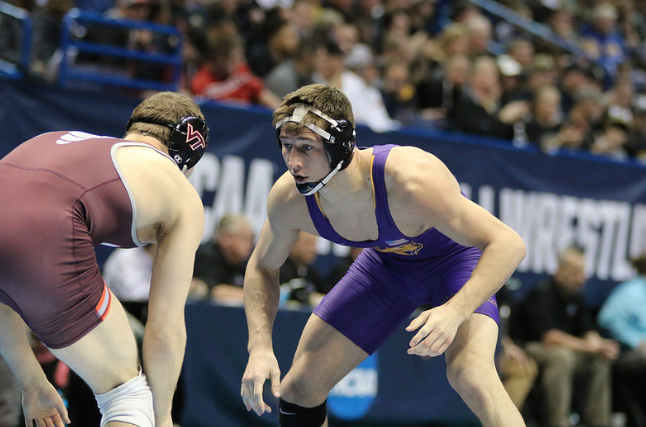 The Panthers went to Stillwater Oklahoma for the first time as a member of the Big 12 on Saturday and couldn’t come away with a win as they fell to the Cowboys 23-10. UNI won just three matches and wasn’t able to take advantage of opportunities to score upsets.

First the good, Max Thomsen was able to sneak away with a sudden victory win over #15 Boo Lewallen. Neither man was able to get a takedown in regulation but the Panther snagged one in extra time.

174 and 184 pounders Taylor Lujan and Drew Foster were also able to score wins. Lujan faced backup Hestin Lamons but was only able to come away with a 7-4 decision. Foster took it to Keegan Moore, racking up five takedowns on route to a 12-2 major decision win. Foster looked as good as he has all season in Stillwater.

Now the not so good, but encouraging. Josh Alber fell 4-1 to two-time defending national champion Dean Heil. Alber was able to get to Heil’s legs a couple of times but couldn’t put Heil in a similar position as his last couple of matches, and Heil was able to get out of those spots.

At 165 pounds Dan Kelly was in the match and took Chandler Rogers to overtime. Kelly was able to get a reverals early in the third period to trail 5-4, and couldn’t turn the eighth-ranked wrestler. Rogers didn’t do much on his belly though, and was dinged for stalling once with one minute left and another with just a couple seconds left in the match to force overtime. Rogers was able to snag a single leg and takedown to secure the win in sudden victory.

Now the bad: UNI opened up the dual with three straight losses. At 125 pounds Nick Piccininni took down Jay Schwarm 13-2. Jack Wagner fell 14-6 to #5 Kaid Brock, which is a bit better than people anticipated. Logan Ryan fell at 157 pounds, 5-2, to Jonce Blaylock, as 157 pounds continues to be an issue for UNI (so does 165, despite the close loss).

#5 Preston Weigel won on a riding time point against Jacob Holschlag. Holschlag trailed 3-2 going to the third period, and chose to go on bottom to start. Weigel rode tough and secured riding time before Holschlag was able to get up with short time left in the period and the Panther wasn’t able to get a takedown.

#11 Derek White wrapped up the dual for Oklahoma State with a 8-0 win over Carter Isley.