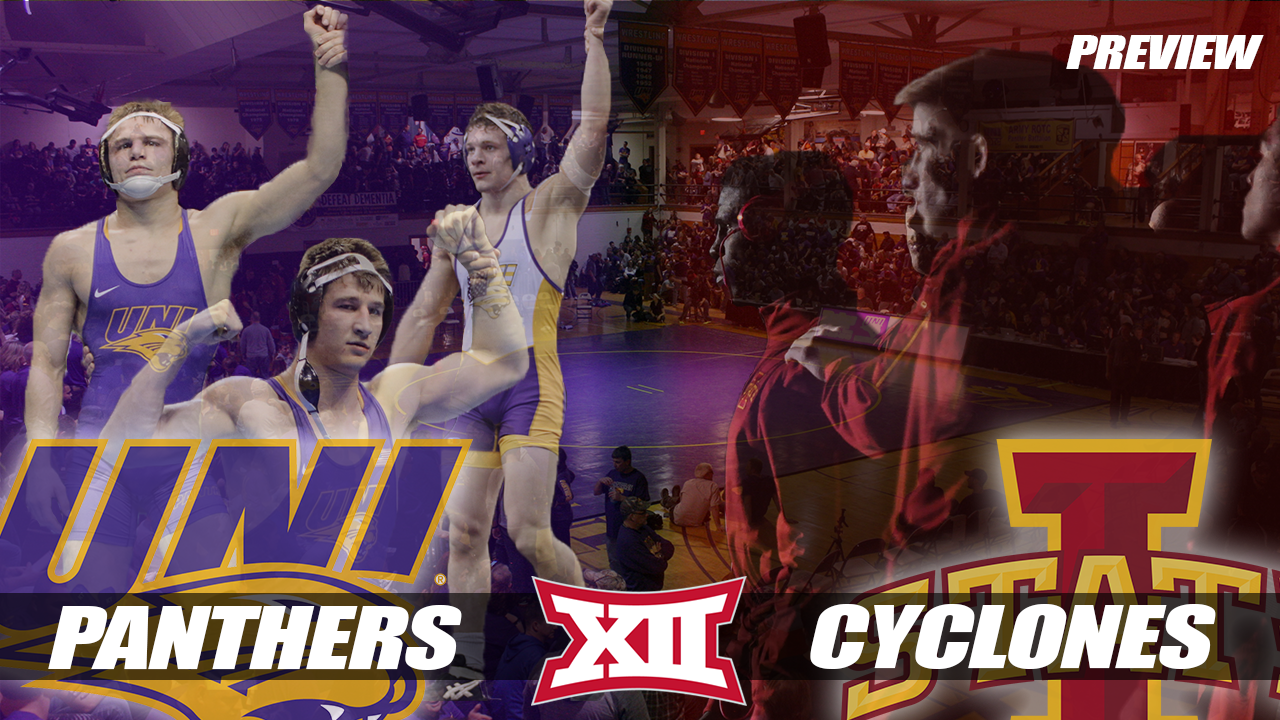 When the Cyclones travel to West Gym they’ll not only be wrestling an in-state rival, but also the team that stands in the way of a second place finish in the Big 12. This dual is riddled with must see matches.

Hey everybody, this is Nic with UNI’s senior day previ….Wait, how did I get here? This is the Iowa State preview! Well now that I’m here I might as well point out everything that Jake gets wrong. My comments will be in italics, like this paragraph, while Jake goes on and on about Iowa State.

UNI comes in to their final dual of the year with three seniors to honor, two of which will be taking the mat in Josh Alber and Drew Foster. Darren Eades is the third senior, a 133 pounder who wrestled for five seasons with the Panthers.

Each team comes in with five ranked wrestlers. Iowa State has two in the top ten, while UNI has four.

Starting at 125lbs we’ll see a battle of two guys that are teetering on the edge of being in the top twenty. Alex Mackall has yet to make The Open Mats rankings, but Jay Schwarm on the other hand has made appearances earlier in the year. This is one of several swing matches Thursday night. Mackall has really improved his offense on top. Alex has gotten good at grabbing a wrist and tilting guys to rack up big point totals, but Schwarm’s cradle is lethal. This should be a fun one.

Schwarm, as we pretty much all know by now, can pin just about anybody. Problem is, he can be pinned by pretty much anybody. His insane style makes it a two-way street as far as bonus points go. If Schwarm can get this one it will put UNI ahead of the curve going the rest of the way, and indeed if the dual starts here whoever wins will set the tone for the rest of their squad.

No. 12 Austin Gomez will look to put bonus points on the board when he faces Jack Skudlarczyk. Austin has answered the call when necessary, i.e. throwing Desanto to his back to almost win the dual at Iowa. Then there was that headlock at the Southern Scuffle against Roman Bravo Young (PSU). If Skudlarczyk can keep this to a decision it’s almost as good as a win, but if Gomez can muscle in and go upper body…good night Irene.

I got a lot of problems with this one. Skudlarczyk hasn’t shown that he’s a world-beater, but he’s gotten a lot tougher as the season has worn on. The redshirt freshman from Texas has stayed in and gotten a lot better than he was at the beginning of the year. It’s a good point that Jake brings up about Gomez’ throwing ability, but unless this match is one of the final two or three, and unless his team needs it, I don’t think Gomez goes for it and I don’t think Skudlarczyk gets caught in it.

And who is Irene? Why is she going to bed so early in the dual? Sounds like a typical Iowa State fan.

The next two weights could very well be the co-main events of the dual.

Could be? Way to undersell it.

You got me on that one, Nic.

Alber and Parker’s match is a rematch of the consolation semifinal of the Big 12 tournament last season, since Iowa State forfeited 141 pounds during the Iowa State/UNI dual last season (a 31-7 Panther win, by the way). Both guys have looked good this season but it’s Alber’s last dual in the West Gym, the crowd will be on his side, and he hasn’t lost in over two months.

Something that Jake fails to point out is that Alber has never lost to Ian Parker in college (3-0). Wonder why he didn’t say that? And Alber also beat Max Murin in the Midlands Final, something else Jake didn’t point out.

Living in the past I see Nic…news flash it’s 2019! Merely an oversight on Alber over Murin at the Midlands.

Although No. 13 Jarrett Degen and No. 10 Max Thomsen haven’t seen each other this year; they do have common opponents. Degen has wins over Brock Mauller (Missouri), Henry Pohlmeyer (SDSU) by fall, and Khristian Olivas (Fresno State). Thomsen prevailed over Davion Jeffries (Oklahoma) by major decision, and Khristian Olivas (Fresno State) by major decision as well. Seeing as Degen has two wins over common opponents Mauller and Pohlmeyer, one of which by fall, I believe he’s gotta get the slight edge here.

I cannot roll my eyes far back enough in my head with those last nine words I won’t even try. It’s not as if these two wrestled twice last season (when Thomsen was hurt) and won both matches, increasing his lead in the second match at the Big 12 Tournament. When Thomsen wants to go there are only two people at 149 pounds who have proved they can stop him, and Degen isn’t one of them.

Again with the time travel from Mr. Ryder…interesting.

The problem is Thomsen hasn’t look great all season. As pointed out above Thomsen’s losses to Mauller and Pohlmeyer are just head scratchers. That, plus his loss to Kaden Gfeller of Oklahoma State earlier this month have nearly sent him out of the top ten. It’s time to go though, and if Thomsen wants to get back to the medal stand he’ll have to stay on his offense and it all starts with Degan.

At 157lbs we’ll see a battle of two guys with something to prove. Chase Straw has won six of his last seven matches, and seems to be peaking just before postseason action begins. Paden Moore entered the lineup back on January 25th. He’s went 2-2 since that time with wins in his debut against Northern Colorado, and last time out against Utah Valley.

I don’t have a lot to add here, as I haven’t really seen Straw wrestle that much. Paden Moore was able to get away with the win against Utah Valley’s Landon Knutzen and just that is a good sign for him. At this point it’s too late for him to qualify for any NCAA spots, so he’ll have to steal one at the Big 12 tournament and why not go in rolling with a two match win streak?

True freshman Logan Schumacher will have his hands full when he meets up with No. 12 Bryce Steiert. Schumacher will be looking for his first signature win; Steiert, a two time NCAA qualifier, undoubtedly eyeing big points against the newcomer.

Any bonus points Iowa State gets at 133 Steiert can match at 165. If Gomez does get a fall, Steiert can work Schumacher over and get one of his own. No matter what Steiert needs to come away with bonus points for UNI, and he needs to get a win going into the post season. Dropping his last match with Demetrius Romero dropped Steiert down to the potential four seed at the Big 12 tournament, which means he’d have to face Branson Ashworth in the semifinal.

Oh there’s a match still to talk about? Steiert, big, over Schumacher.

I wonder who won those matches?

Back in early November No. 8 Taylor Lujan bested Marcus Coleman by a score of 10-7. These two are both explosive on their feet, and can put up points in bunches. Coleman has put up thirteen points in one period, and Lujan has nine falls on the year. Both wrestlers come in having suffered losses in their last competition. Coleman had a 12-6 setback against Oregon State, and Lujan lost a close one to No. 12 Kimball Bastian of Utah Valley. Can Coleman close the gap and end up on top? Will Lujans experience being a two time NCAA qualifier prove to be too much? Should be some fireworks in this one.

The answers to your questions are no and yes, respectively. Lets move on.

Well I guess we can talk more about it. Bastian’s win tried to throw a wrench in the works for Big 12 seeding, but Lujan’s win over Joe Smith pretty much locks up the one seed. Although if Coleman does get the upset it *might* be enough to knock Lujan all the way down to fourth. But as we don’t know how they seed the Big 12, we may never know. I think the altitude in Utah (something nobody is talking about) really screwed with Steiert, Lujan, and Foster, and contributed to the former two’s losses. I don’t see Coleman having enough offense to compete with Lujan and his insane style.

No. 5 Drew Foster won by major decision 14-0 over No. 18 Sammy Colbray in the finals at 184lbs at the Harold Nichols Cyclone Open. Sammy has won nine out of his last ten matches, with the only loss coming to No. 10 Jacobe Smith (Oklahoma State). Foster, 2017 All-American and two time NCAA qualifier, on senior night will be looking for more of the same when this showdown takes place Thursday night.

Foster was one point away from a tech fall in their first match. I mean what else can I say? As long as Foster’s conditioning is on point, he seemed to fade quite a bit in his match with UVU’s Will Sumner, but as I pointed out I’m putting that on altitude, he should be fine in this one.

Our second true freshman of the dual, Tyrell Gordon has quite the chore ahead of him when three time All-American No. 5 Willie Miklus comes to town. Like Gomez, bonus points from Miklus may be required to seal the win for Iowa State. This definitely looks attainable for Mr. Miklus. However, you can’t count out a hungry young competitor like Gordon.

Gordon has, a lot like Skudlarczyk, looked a lot more aggressive lately, earning the first takedown in both his match against Oklahoma State’s Dakota Geer and UVU’s Tanner Orndorff. Problem is is that he can’t seem to sustain that level of offense. Keeping this to a decision might be the difference for UNI, as Miklus, obviously, is very good.

The heavyweight matchup is very intriguing. Gannon Gremmel has a couple big wins this year. First he knocked off last years Big 12 runner up AJ Nevills (Fresno State), and then followed that up with pinning No. 12 Tate Orndorff (Utah Valley). Carter Isley was out with injury between December 8th, and returned to the lineup against Northern Colorado on January 25th. This being said, I believe Gremmel has the edge in this one.

I don’t know what to think about this one, as the only time I’ve seen Gremmel wrestle this season was against Iowa’s Sam Stoll at Carver-Hawkeye (a 5-1 win for Stoll). That’s not a real fair shake for him, but nobody has seen a lot out of Isley all season, as he’s been out with an injured knee. The two are 1-1 against each other, so the rubber match may decide the dual.

And that’s it from me, the italicized writer. We’ll have all our best people (myself and Cam Kramer) at the West Gym on Thursday night and we’ll bring you our usual great-ish reporting.

This was fun Nic, thanks for the banter!