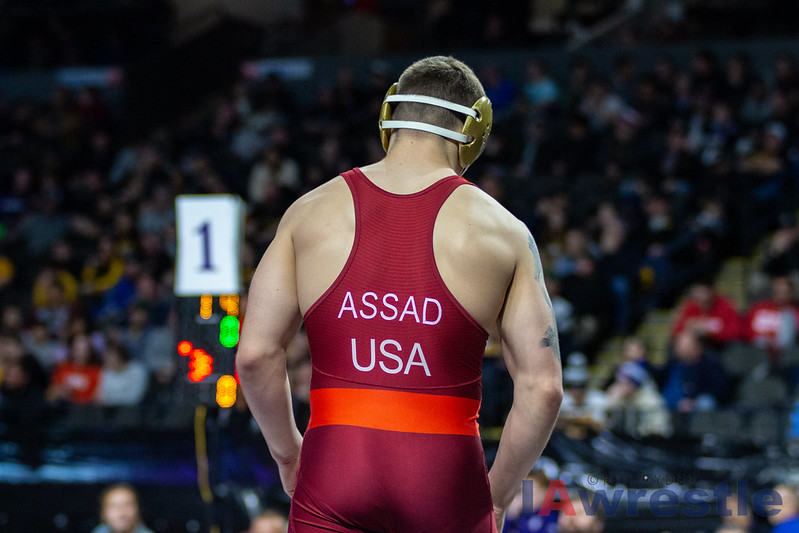 The University of Iowa improved to 5-0 on the season by blanking the Indiana Hooisers 41-0 in Bloomington. There were plenty of fireworks to be had in the dual – including several Hawkeye pins, but the biggest headline of the dual wasn’t the shut out or the big wins, it was the fact that true freshman Abe Assad got the not at 184.

Starting things off was the #1 ranked Pat Lugo taking on Graham Rooks at 149 pounds, Lugo got off to a fast start building a 6-1 lead in the first period. From there Rooks mounted a comeback in the second period with a pair of takedowns closing the gap to 9-5. Lugo was able to shut it down from there winning by the final score of 10-6 with riding time.

In the night’s second bout Kaleb Young controlled the entire match from start to finish by picking up a pair of takedowns in the first period to go up 4-1, and tacking on an escape and takedown in the second to extend his lead to 7-1. Young was almost able to push the match into bonus territory, but Silva managed to score a third period takedown to hold it to a decision, 11-4.

The first bonus point win of the evening came from 165-pound star Alex Marinelli who pinned Davey Tunon in the third period. The Bull was up 9-3 to start the final period before putting his Hoosier opponent away.

After bonusing his way to start the year, it was an uncharacteristic start for Michael Kemerer, who won 9-6 in his match against Jacob Covaciu at 174. Kemerer looked to be off to a strong start with a pair of first period takedowns, but he was unable to sustain his pace and allowed Covaciu to stay in the match.

Closing out the first half of the dual was the biggest news story of the evening was who took the mat at 184 pounds as it wasn’t Cash Wilcke or Nelson Brands, but true freshman Abe Assad who got the call against Jakob Hinz. In his first match officially attached Assad started off on the right foot striking in the first period with a takedown. Assad added an escape in the second and takedown in the third to finish with the final tally of 5-2 in his first career start.

In the 197-pound match Jacob Warner racked up a 8-3 decision over Nick Willham. He started with a pair of takedowns in the first period and never looked back from his early scores.

Keeping it short and sweet was Tony Cassioppi who quickly dispatched Brandon Streck with a first period fall. Cassioppi was able to get a body lock and took Streck down to his back near the edge of the mat.

In near equally dominant fashion was Spencer Lee’s 15-0 drilling against Liam Cronin. The reigning NCAA champion poured on 12 straight points to open the match, and finished the technical fall by scoring an escape and takedown to end the match.

Not to be outdone was junior Austin DeSanto who made quick work of Jonathan Moran to win his match by fall in the first period.

In the dual’s final match Max Murin came out against Eddie Bolivar and picked up a solid 6-0 win to end the night.

Up next for the Hawkeyes is an extension of their state of Indiana road trip as they take on the Purdue Boilermakers for a Sunday afternoon showdown. That dual will get underway at 3:00 PM Central Time.

2 thoughts on “Iowa Scores Shutout against Indiana in Bloomington”