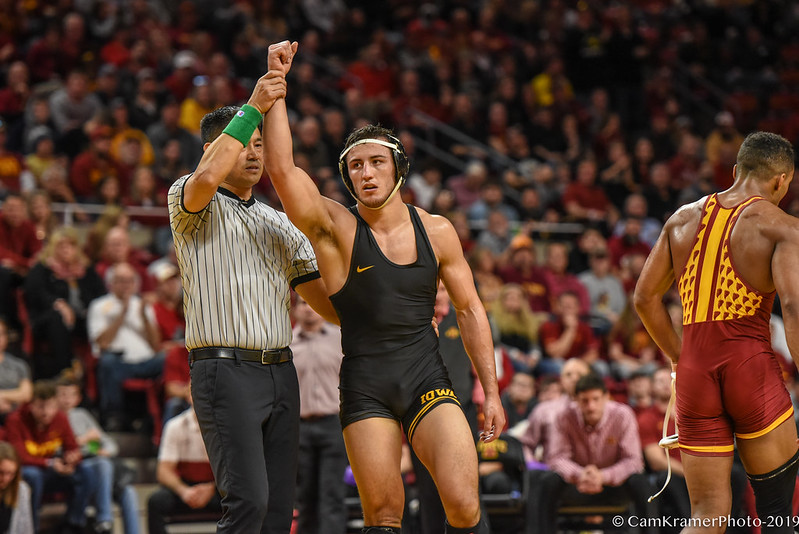 The Hawkeyes capped off their second dual of the weekend with another victory, this time a 41-0 over the #20 ranked Purdue Boilermakers. Iowa’s other win this weekend was a 41-0 drilling against Indiana, which also marked the varsity debut of true freshman Abe Assad. The Boilermakers were riding a full head of steam coming into today’s matchup having won their last six duals – including Friday’s upset over #14 Northwestern. During that stretch, this team also produced their highest finish at the Cliff Keen Las Vegas Invite, and their 75 points scored at Midlands was third-best all-time for their program.

The dual opened with a storm of offense from Iowa’s 125-pound star Spencer Lee, who racked up 15 points in the first period to win by technical fall over #5 Devin Schroder. Lee struck with a takedown and used a series of tilts to rack up 13 points worth of near fall to close out the match.

The offense continued into the 133-pound bout between Austin DeSanto and Travis Ford-Melton. DeSanto was almost able to match Lee’s pace set in the opening match as he finished the first period with a 14-1 lead. In the second period, DeSanto took his choice on bottom and got the quick escape and takedown to seal the win.

Sophomore Max Murin took control of the 141-pound battle with Parker Filius from the word go, picking up a first period takedown followed by a ride out. Murin tacked on an escape and takedown in the second to go up 5-0 heading into the final period and his final point came via riding time, a 6-1 win.

We did not see the #14 ranked Griffin Parriott take the mat for Purdue at 149, instead, Nate Limmex received the call for the Boilermakers against the top-ranked Pat Lugo. Like the three matches before him, Lugo was in complete control in his match, with a solid 8-0 major decision.

That led into one of the match’s biggest head-to-head meetings with Kaleb Young facing fellow top ten wrestler Kendall Coleman to close out the first half of the dual. Young managed to strike first with a takedown in the closing seconds of the first period and added an escape in the second period to go up 3-0. In the final period Coleman mounted a comeback scoring a takedown and escape of his own to tie the match. Young was intentionally released, which led to his winning 4-3 score.

After an intermission, Iowa came out with a strong win from Alex Marinelli who picked up his second fall on the weekend, this time against Tanner Webster to win at 165 pounds.

Possibly the dual’s most anticipated bout was the meeting at 174 between #2 Michael Kemerer and #4 Dylan Lydy. Things were even after the first period, with neither wrestler able to get to their offense. Things started to open up in the second when Kemerer earned an escape and picked up a point after Lydy was hit for stalling twice. In the third Kemerer was able to pour it on with three takedowns to finish with the 8-4 win.

With the redshirt off Abe Assad was back for his second varsity match against Iowa native Max Lyon at 184 pounds. Assad was first on the board after picking up a first period takedown to go up 2-0. It was 3-1 after a Lyon escape in the third period, but Assad was able to pull away for good with another takedown.

In the rubber match between Jacob Warner and Christian Brunner, it was Warner who came away with the win to take the series lead. After a scoreless first period, Warner was on the board first by getting out from underneath and scoring an escape. The Hawkeye exploded in the final period putting Brunner on his back for a four point near fall turn and later added a takedown. After factoring riding time Warner defeated the nation’s #2 ranked wrestler 8-2.

The dual ended with another bonus point win, this time a fall from Tony Cassioppi over Thomas Penola in the first period.

Up next for the Hawks will be a return to their home mat where the will take on the nation’s second-ranked dual team, Nebraska.