Schriever making his way back to the mat, ready for the future 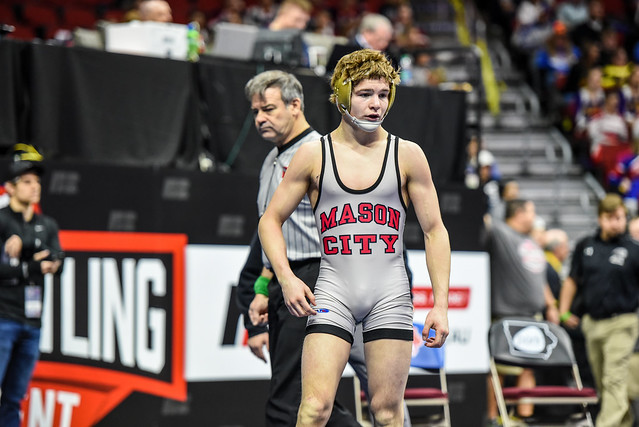 Last month in Fargo, North Dakota wrestling fans who follow the freestyle and Greco-Roman season saw Team Iowa walk away with a top three finish in the Junior Men’s freestyle division. I specifically point out the Junior’s team because while overall this was a fantastic performance by Team Iowa, it was also accomplished with a notable exception of one Cullan Schriever who has been one of the leaders of Team Iowa going back to the youth level.

Since before he stepped on the mat as a freshman many fans who follow wrestling on the national scene already knew his name and were prepared for him to make his presence known on the high school level. So far Schriever has delivered on a lot expectations, winning freestyle national titles in USA Wrestling’s Cadet and Junior divisions, and he also holds the distinction of being the only Iowan to win the prestigious Super 32 preseason tournament in North Carolina.

But this summer Schriever has been noticeably absent from competition due to injuries he sustained in the early parts of 2019. Schriever suffered a broken ankle in January, and then aggravated his shoulder at the state tournament in February.

“My recovery has been going great and I have been making steady gains for quite some time now.” Schriever said in an interview with IAwrestle, “I make it a priority to get to Sebolt Wrestling Academy practices a lot, and that means either pulling up to the NIACC room or driving to Ames. I am not able to do everything that I would like to do, but that doesn’t mean I’m not getting better at wrestling. I love being around my teammates and feel like it is only right to be at practices and tournaments with them.”

Schriever wrestles in Class 3A for Mason City where he is a two-time state champion. This past winter Schriever was one of three wrestlers looking to remain perfect at the state tournament and was hopeful to end the season with title number three. Those injuries ended his bid to join the Iowa elite list of individuals who managed to win four state titles.

“Winning my third state title was definitely an expectation of mine going into the season, and it was just another stepping stone on the way to my ultimate childhood goal of being a four-timer that I went out to accomplish when I was 5 or 6 years old. After it set in that it wouldn’t be possible for me anymore, I was obviously heartbroken and it still happens to pop up in my head randomly.”

While in the moment Schriever experienced heartbreak the good news is that the future still remains very bright. Flowrestling ranks him the #39 prospect overall in the class of 2020, and they also rate him as the country’s #9 overall prospect at 133 pounds.

As one of the nation’s top prospects it comes as little surprised that many of the top college programs pursued Schriever, but the Mason City standout made the decision to commit to the University of Iowa shortly into his junior year.

“If I could do it over again, I would’ve committed to be a Hawk even earlier than I did in the first place.”

Now hungrier than ever to go out on top, Schriever has reset his goals with his mind’s eye on the future. While he is working to finish his final high school season on top of the podium he is also working to better position himself for the future as well.

“All of the adversity has reminded me that my goals are a lot bigger than high school wrestling. I am focused on doing the right things to make world teams and win NCAA titles for the Iowa Hawkeyes.”

By now most have become familiar with Schriever’s high school club Sebolt Wrestling Academy (SWA) which is based out of Mason City, but also hosts practices in Ames. The club has amassed a wealth of talent from various hotbeds across the state and has now produced champions on the state and national level.

But while Schriever has been able to get work in with his SWA club, he is also able to attend workouts in Iowa City through the Hawkeye Wrestling Club. As one of USA Wrestling’s Regional Training Centers (RTC) Schriever meets a set of published criteria allowing him to travel down to his future college home for the occasional workout.

“I am close enough to participate in the RTC practices and have been to some of them. The injuries obviously haven’t helped recently, but the workouts are great for me and I will be down there again soon to help prepare me for college wrestling.”

Another benefit to Schriever already having made his college decision is he no longer needs to deal with the pressure and other challenges that come with the recruiting process. Instead he can focus solely on getting back on the mat and getting closer to his goals.

“The recruiting process can be time consuming. I knew I was going to end up at Iowa no matter what, so I figured I might as well commit early so I didn’t have to talk with other schools all throughout my season. The less distractions, the better.”

Given all five wrestlers gave their commitments around the same time it has allowed the group to form a sort of bond even before reaching campus.

“It has been really cool being involved with my future teammates that have committed early. A large amount of us talk very regularly and it is awesome knowing that I will be teammates with these people in no time. If I could do it over again, I would’ve committed to be a Hawk even earlier than I did in the first place. I know it is right for me and I can’t wait to be down there.”

Looking toward his final season Schriever is unsure where he will land as far as his weight. Projecting as college 133 has him pegged at competing at either 126 or 132 pounds for the upcoming season, but for now the wrestler is keeping his options open on where he will be.

“I honestly don’t know yet what I will be in college or even this high school season. I will most likely end up at 132 this year depending on what my weight settles at over the next couple months. I’d rather focus on staying healthy and getting stronger than cutting more weight than I need to, even though 126 would not be challenging to make.”

While we were talking to Schriever we couldn’t help but ask who he views as the next up-and-coming wrestler to come out of the SWA room. The club has also boasts fellow Junior national champion Drake Ayala, who is quickly catching Schriever in terms of accolades. The club also features a slew of other nationally credentialed wrestlers, but when asked to pick the next big name in the SWA, Schriever did not hesitate.

“I’ve heard people talk a little bit about him here and there, but Nate Jesuroga is a hammer. This dude is the real deal and I fully believe that he won’t just have the country on notice within the next couple years, but the world, too. A hard worker who is coachable and does the right things. He’s going to be scary, just wait on it. I don’t think he will be the only one either. SWA does it right, and there are so many young studs in that room that are coached by the best and battle the best every day in the room. I’m lucky to be teammates with all of them!”

There is no doubt that Schriever is one of the top high school talents the state of Iowa has to offer, which makes his road back to the mat a big story. Hawkeye fans are not alone in wanting to see the prized blue chip recruit return to competition, as Schriever has always been one to put on a show from his dominating victories to his hard fought battles on the national scene.

2 thoughts on “Schriever making his way back to the mat, ready for the future”