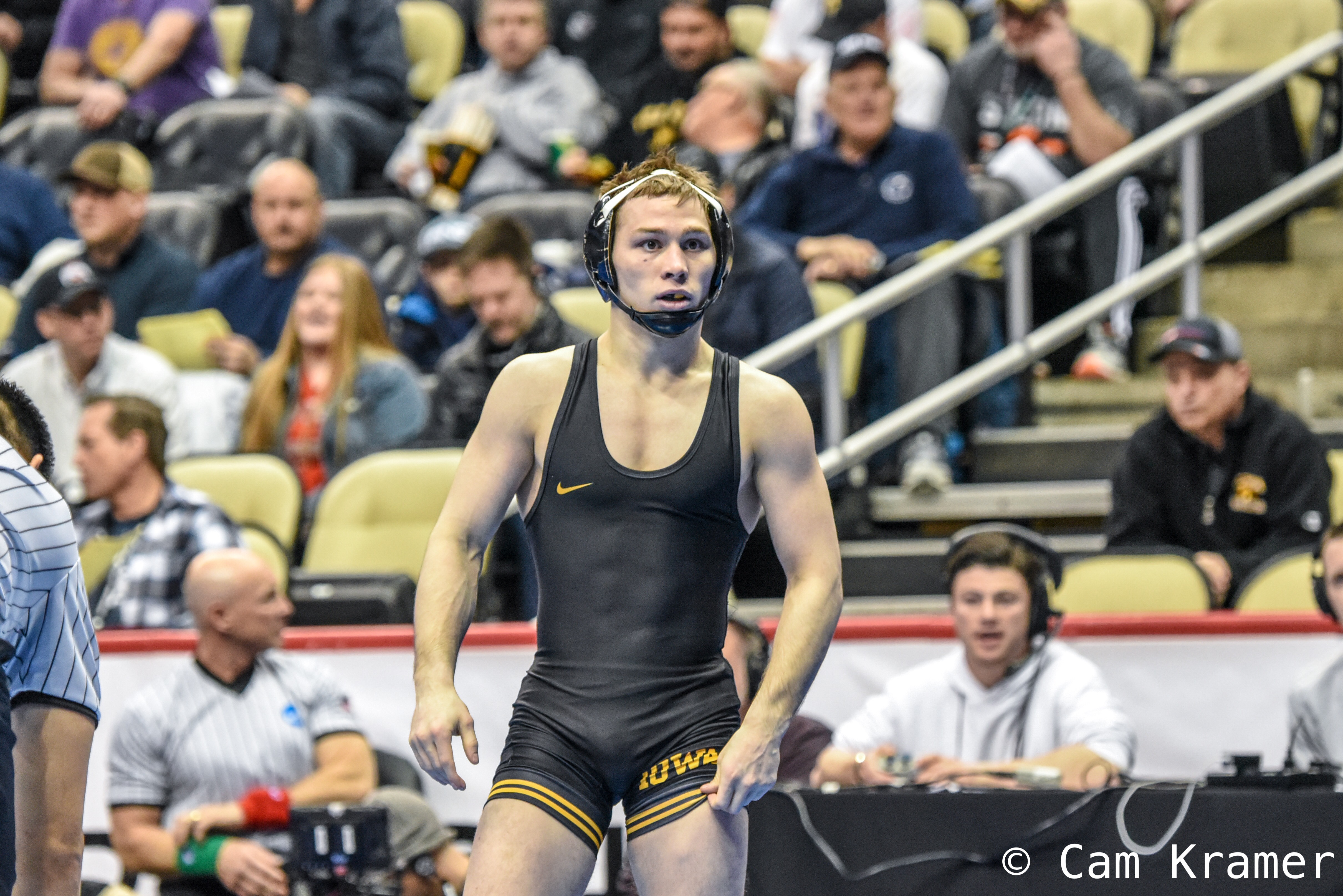 With the official arrival of Gavin Teasdale, the Iowa Hawkeyes find themselves with options aplenty in the lower weights. This will give the program the most depth in this department since possibly during the early Brands-era when the team was packed with All-Americans at the first three weights with notable names Matt McDonough, Joe Slaton, Dan Dennis, and Montell Marion to name drop a few. The current Iowa crop of Iowa lightweights shares some things in common with the previously mentioned and this coming season they may have a couple new faces knocking down the door to get their chance in the lineup.

Before we get into the potential scenarios of lightweight lineups Iowa will run out we need to do a bit of prefacing. For one you should already know the names we will be discussing from last year’s team. There is two-time NCAA champion Spencer Lee, All-American Austin DeSanto, and bloodround finisher Max Murin who are all returning for next year’s team. The other two names that will be considered are Nebraska transfer Jason Renteria, who spent all of last season in redshirt, and the most recent addition is Penn State arrival Gavin Teasdale.

Now that we know the who we can lay out our final assumptions we will be operating under as we look to the scenarios. The first and probably most important is the assumption that Iowa is going to shoot their shot in 2020 and try and win it all. It may seem a tad silly to think a team that’s regularly in trophy contention would consider not trying to win a national title, but we have recently witnessed some teams “mortgage” their present in order to better position themselves in the future. That doesn’t look like it will be the case for this year’s Iowa team. It’s no secret that a lineup with Spencer Lee is the best possible option the Hawkeyes can roll with on the mat. For that reason we are assuming Lee forgoes any talk of taking a redshirt – Olympic or otherwise.

Our second assumption comes from the horse’s mouth. In his interview with PA Power Wrestling Teasdale made the following three statements, and considering he is a credible source we are going to take him at his word. The first statement Teasdale made was that he is looking to enroll and compete this season. There was no talk of easing back into competition. Teasdale’s eyes are firmly on the prize. The second is Teasdale’s comments regarding his weight. He informed the public he is currently walking around at roughly 140 pounds, and that last season 125 was a difficult cut. He seems a likely candidate to compete at 133.

The final Teasdale statement was his comment regarding his eligibility. In the interview Teasdale said the NCAA considers his last season a medical redshirt, which is fundamentally different than if he had said he had just redshirted last season. A medical redshirt would imply he still has the use of his regular redshirt and could sit out this season without penalty and still have four years of eligibility left.

With that lets look at the potential scenarios.

By the end of last season Iowa had one of the more successful lightweight performances at the 2019 NCAA tournament. Obviously, everything looks shinier with a national champion, but DeSanto looked the part of a title contender for most of his sophomore campaign. Murin had a strong NCAA tournament that saw him reach the quarterfinals before later finishing one match short of landing on the podium. With this trio a relatively young group, most are still expecting this three to continue to get better and hopefully see an even better finish in 2020.

After taking a couple losses in the regular season, Lee returned to his 2018 form and navigated his way to a second national title. Fellow sophomore DeSanto finished fifth at 133 pounds last March, but his regular season resume includes a victory over his bracket’s national champion, Nick Suriano of Rutgers. Finally, Murin put together his best wrestling in March by earning a solid Big Ten finish to firmly cement himself as a NCAA qualifier, and from there he went on to nearly earn All-America status as a freshman.

Under this option we would then assume that Teasdale would work his way back into competition and school while redshirting. Depending on his schedule he could get a taste of big-time competition by earning one of Iowa’s Midlands invites and fans would then be able to get a good barometer on where he stands. This would also mean that Renteria would serve as an extremely good insurance policy from the bench.

Iowa loves their Pennsylvania lightweights. An often discussed fact this past year was that 40% of Iowa’s lineup hailed from the Keystone State and as many as half of this year’s lineup may work their way into next season’s lineup. The key difference to adding Teasdale to the lineup versus DeSanto is the fact that Iowa would have five wrestlers from the Western Pennsylvania high school club, the Young Guns. The trio of Lee, Teasdale, and Murin were all regular training partners all coming up through the club at around the same age and middleweights Kaleb Young and Michael Kemerer also draw roots from the Young Guns.

Remember that our assumption is that Iowa is going for all of the marbles in 2020. If Teasdale comes into the room and is absolutely annihilating his competition and looks like he could be the best option, it would not be at all surprising to see the new face enter the lineup right away (a la DeSanto a year ago). The good news is that if Teasdale looks like potentially the stronger candidate Iowa has the option to redshirt DeSanto to save a year and figure out the future later. Rolling wtih Teasdale also gives the Hawks an All-American insurance policy if the need were to arise.

One storyline from last season that was never truly answered was ‘where is Jason Renteria’. Last offseason Iowa picked up two big transfers and one of them (DeSanto) was off to a strong start to his Hawkeye career. This in turn made fans anxious to see what their other big name transfer was going to bring to the table. The Iowa staff left fans waiting for a full season but later this year the world will finally get its answer. As a true freshman Renteria was a NCAA qualifier for the University of Nebraska at 133 pounds. He would later infamously miss weight at the NCAA tournament, so while he technically qualified for the national tournament, he has yet to register a match at the big dance.

Fast-forward a season and we project that Renteria will likely be a contender for the 141. There is no question that Jason has the potential earn his way into the Iowa lineup and become to be a star wrestler, but obviously Murin will be a difficult obstacle to overcome within his own room. If Iowa is all in Brands will more than likely base his decision on the multitude of factors that include the two wrestlers going head-to-head and how they hold up against the competition. Renteria has always been known for having a knack for scoring, but the question will be how well he has developed his defensive abilities over the past 18 months.

Our final scenario features both new comers to the lineup, assuming that Teasdale emerges as the more favorable option over DeSanto, and Renteria overcomes Murin. In previous examples we’ve already hashed out on how both of these wrestlers could find their way into the lineup. All four of the wrestlers vying for the 133 and 141 spots were top notch recruits coming out of high school, and with the exception of Teasdale – who hasn’t wrestled a collegiate match – have shown their ability to live up to their potential in the early goings of their careers.

As conceivable as it is that Iowa will feature the same starting three from the 2019 postseason, right not it seems as equally likely that both Teasdale and Renteria could come and and dethrone the incumbents.

Iowa has a lot of talent in the lightweight department. And that’s a good thing.

What lineup scenario do you think is the most likely for next season? Tweet at @Rossbchek and @IAwrestle, or comment on our Facebook page and let us know your thoughts.