Kevin Dresser is NWCA D1 Coach of the Year 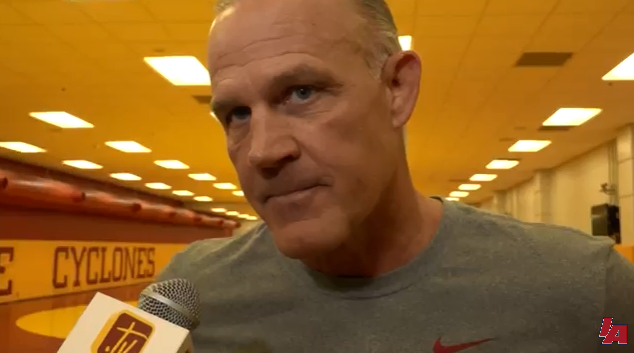 AMES, Iowa – The rebuild of Iowa State wrestling is on, and head coach Kevin Dresser is the man leading the charge. He has been named the 2019 NWCA Division I National Coach of the Year, presented by Defense Soap. It is the second time that Dresser has received these coaching honors in his career

In his second year at Iowa State, Dresser is bringing the No. 15 Iowa State wrestling program back to the national forefront. Last season, the Cyclones qualified just one wrestler for the national tournament. This season, ISU will be sending nine wrestlers to the NCAA Championships and were just one win short at the Big 12 Championship from sending a full roster of 10. It’s the most NCAA qualifiers for the Cyclones since the 2009-10 season.

Dresser was named the 2019 Big 12 Wrestling Coach of the Year following his team’s second-place finish at the Big 12 Championship. ISU had four wrestlers reach the Big 12 finals, which snapped a two-year stint where the Cyclones had no Big 12 finalists. Chase Straw won the 157-pound Big 12 title, which was Iowa State’s first Big 12 Champion since the 2016 season.

Hilton Magic is seeing a resurgence for wrestling duals. This season, Iowa State averaged over 3,569 patrons per home dual, which is the fourth largest in the last 25 years.

3,939 Cyclone fans attended the dual against Oklahoma this season, which was the largest crowd for a non-Iowa dual since Cael Sanderson’s senior day in 2002.

Iowa State had a terrific regular season as well. On top of a 10-4 dual mark, 6-2 in Big 12 contests, the Cyclones placed third at the Southern Scuffle, which was their first top-4 performance at a national tournament since the 2014 Cliff Keen Las Vegas Invitational.

Three of Iowa State’s four dual losses were to teams ranked in the top-5 nationally. As a team, it was dual dominance for ISU in 2018-19. They outscored opponents by a 404-148 margin. They also pieced together a six-dual winning streak, which was the best since the Cyclones won 11 in a row between the 2009-10 and 2010-11 seasons.

Coach Dresser and company have their eyes set on the NCAA Tournament this weekend. Nine Cyclones will descend on PPG Paints Arena for the 2019 NCAA Championships. Wrestling begins on Thursday morning at 11 a.m. CT on ESPNU.