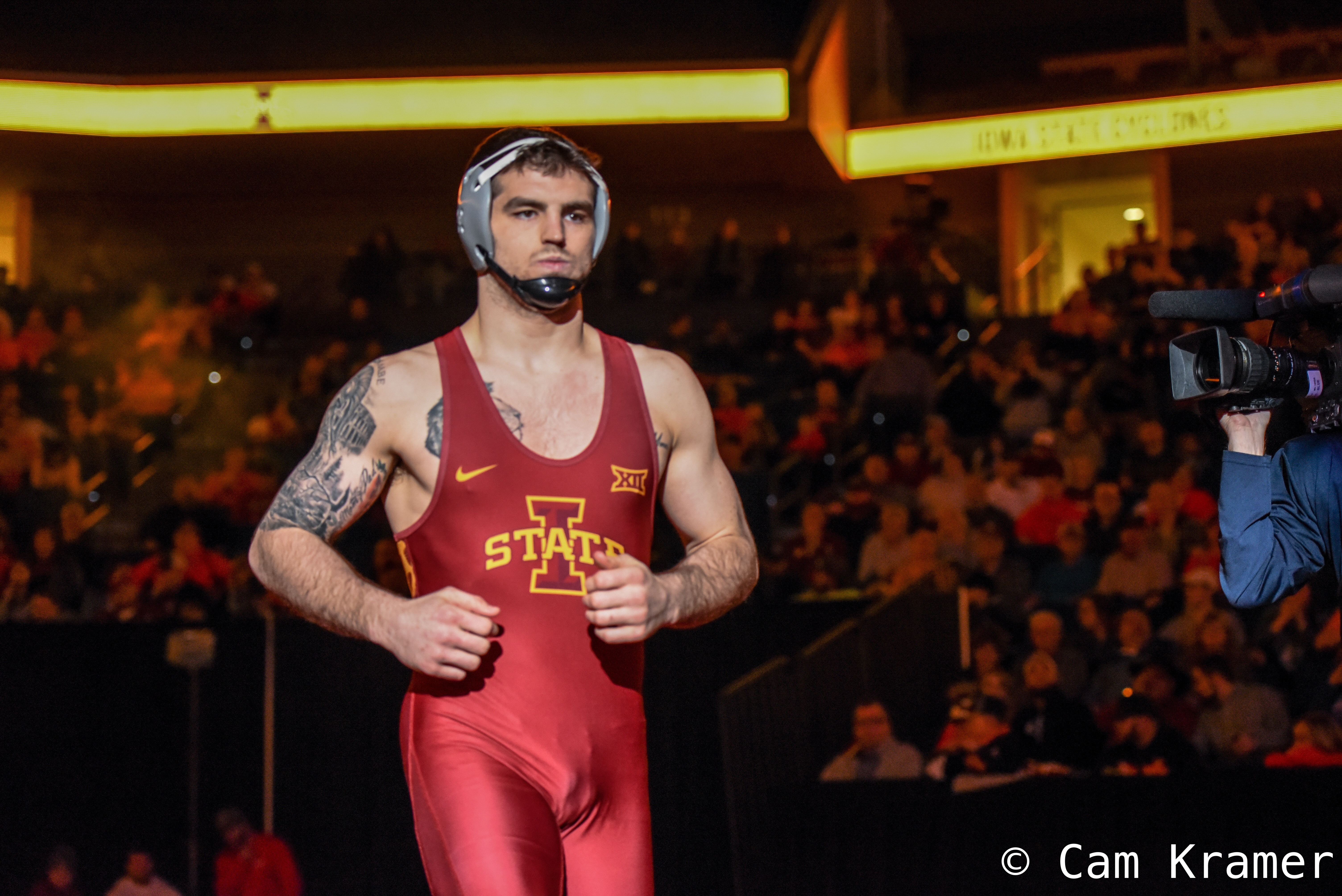 The NCAA championships are set to get underway this Thursday in Pittsburgh, Pennsylvania. It seems strange to thing that a year ago this Iowa State team sent just one qualifier to the NCAA tournament, and here we are in Kevin Dresser’s second full season as head coach and the program has qualified nine. The Cyclones are riding a strong wave of momentum into Pittsburgh. Not only did they bring a near full squad, but they also put on a big performance at their conference tournament taking second place at the Big 12 tournament ahead of instate rival UNI.

This has certainly been an emotional year for the program as well. Just days before the Big 12 tournament the wrestling community learned of the passing of Garry Miklus, father of 197-pound starter Willie. The late Miklus lost a years-long battle with ALS, and was one of the primary factors that moved the three-time All-American out of Missouri to Iowa State so he could be closer to his father these past few months.

The Miklus family has been in the thoughts and prayers for all of us here at IAwrestle, and we are looking forward to seeing what Willie can do this week as he will continue to help lead this program turnaround.

Last year this weight was severely limited for the Cyclones as they lost their expected starter due to transfer, and his backup to injury, which left them having to go out and recruit an on campus wrestler to fill their lineup. Because of that 2018 transfer-ee Alex Mackall was well received when he entered the lineup this season and he rewarded fans by giving them a NCAA berth at 125 pounds.

He will open his tournament with ACC runner-up and #14 Fausz of NC State, which will be the first meeting between these two wrestlers. Fausz is a tough wrestler and is definitely a touch match to draw right out of the gate. One thing that could play into the Cyclone’s favor is Fausz has a known, difficult weight cut which could play a role if he is not fully recovered.

After that he has a potential meeting with either returning NCAA champion Spencer Lee of Iowa or Iowa native Bryce West. The former he lost 13-4 during the regular season dual meeting, and has never faced the latter.

Speaking of making an impact while entering the lineup, redshirt freshman Austin Gomez delivered on the preseason hype by qualifying for the NCAA tournament as the #13 seed this season. He’s had a mostly positive season, except for one minor slip up to Anthony Cefolo of Rider back in January.

Round one will be against an unfamiliar opponent #20 Paetzell of Lehigh. A win there should advance him to a meeting with one of the bracket’s top seeds #4 Phillipi, who has been one of this season’s biggest surprises.

Making his NCAA debut is sophomore Ian Parker, who just missed out on qualifying a season ago, but this year finds himself in the middle of the seeding pack at #17. He has been much improved from a year ago, but finds himself with a couple of early tests starting with Big Ten runner-up Chad Red of Nebraska.

While it’s true that Red notched several upsets to reach the Big Ten finals, it still speaks to just how dangerous of a wrestler he can be. Should Parker manage to get by Red in round one he will face the weight’s reigning national champion and top overall seed Yianni Diakomihalis.

That’s not to say that Parker doesn’t have some giant slaying blood in him. A year ago he went into Stillwater, Oklahoma and took out two-time NCAA champion Dean Heil, and he knocked off two-time All-American Kaid Brock also of Oklahoma State this season.

The only returning qualifier from Iowa State’s 2018-19 season, Jarrett Degen is looking to build off of his round of 12 performance a year ago. He opens the tournament against Rohlfing of CSU Bakersfield who he has split matches with this season. The win was a second period fall for the Cyclone and the loss came in sudden victory, 7-5.

Should Degen manage to advance he has the potential to meet either #9 Oliver of NC State or Schuyler of Lehigh. Degen has never faced Oliver, but does own a major decision over Schuyler from a season ago.

As the eight seed that means that Degen is also drawn into the toughest quarterfinal of the bracket, with top seed Anthony Ashnault the bracket’s top seeded wrestler.

there was only way way that guaranteed Iowa State would have a NCAA qualifier and that required  Chase Straw to win a Big 12 title. The junior answered the call downing Oklahoma’s Justin Thomas 3-2 to punch his first ever ticket to the NCAA tournament.

He opens against Minnesota’s #10 Bleise, and Old Dominion’s Early and Princeton’s Monday find themselves on the other side of his quadrant. In his career he has only faced Early, dropping a 6-4 decision last season. Monday was one of the more impressive freshmen at this weight and has given a few of the top guys fits when he’s faced them this year.

Like his fellow freshman Gomez, Marcus Coleman’s presence in the lineup has helped fuel this Cyclone team’s turn around as he qualified for the NCAA tournament in his first season. The Big 12 itself had several veterans so it showed some real poise for Coleman to make it through his conference tournament and on to Pittsburgh.

In round one Coleman will face off with an opponent he has already faced before, Duke’s #12 Finesilver. These two met earlier this season at the Southern Scuffle where the Duke wrestler came out on top by major decision, 10-2. That’s a pretty hefty margin for the freshman to reverse, but he has continued to show growth over the year.

In the second round of potential opponents we see one of the bracket’s top wrestlers, Lehigh’s #5 Kutler and Edinboro’s #28 Oliver. Coleman has no history with either wrestler.

A reoccurring theme throughout this preview has been focused on how these wrestlers have helped contribute to the team’s turn around. Another wrestler that is a testament to buying into the new coaching regime is sophomore Sammy Colbray, who made the decision to move down a weight and was rewarded with the #10 seed, which is the third highest on the team.

Colbray will lead things off against Fresno State’s Jackson Hemauer, a wrestler he defeated 8-7 earlier this year when their teams met in the dual season.

His next round of opponents feature a pair of solid wrestlers. Obviously, Nick Reenan of NC State is the big name as the #7 seed, but Oklahoma State wrestler Dakota Geer is a sneaky good sleeper in this bracket. Spending a good chunk of the season up at 197 pounds appears to have hurt Geer’s seed. He’s definitely a much bigger threat than his #26 seed would indicate.

Next we reach Iowa State’s top seeded wrestler on the team, redshirt-medshirt senior Willie Miklus. After earning three All-American honors at the University of Missouri there is no question that Miklus knows how to get it done in March.

Starting things off will be Joshua Roetman, who Miklus has never faced in his career. Assuming he gets through with a first round win he should meet up with #11 seed Brunner of Purdue. At the start of the season Brunner figured to be one the weight’s top wrestlers, but he has tapered off a bit falling out of a top ten seed.

The other top seed in Miklus’s quarterfinal is Big 12 finals opponent Preston Weigel, who is the #3 seed. In their two meetings this season Weigel took both, with the most recent being the 10-0 win in the Big 12 finals.

Gannon Gremmel stepped into the Cyclone lineup and seized his opportunity and qualified for his first ever NCAA tournament. In order to punch his ticket to Pittsburgh, Gremmel needed to avenge a regular season loss to UNI’s Carter Isley, which is a rivalry that began long before these two started their college careers.

On Thursday Gremmel will open his tournament against #7 Hillger of Wisconsin, who is another wrestler Gremmel has had a bit of a rivalry with since their college careers began. Last year the two split matches with Gremmel winning at the UNI Open and Hillger returning the favor later in the year. The two also met in freestyle this past summer out in Las Vegas, where Gremmel defeated Hillger on the way to his UWW Junior U.S. Open title.

In terms of a first round draw against a top seed this should be viewed as a winnable match for Gremmel. His next round opponents would be either #10 Hemida  of Maryland or Gunning of Buffalo, with the latter of the two owning a previous victory over Gremmel.