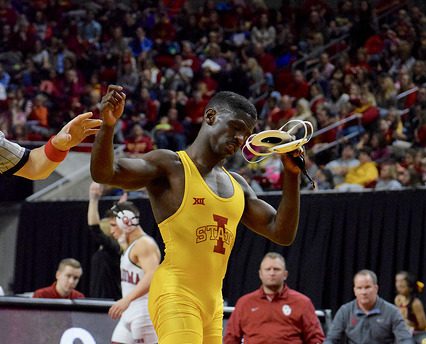 Change is coming to the Cyclone Regional Training Center as IAwrestle has learned that resident athlete Earl Hall will be leaving the program in search of new training opportunities. A former All-American for the Cyclones, Hall has been a member of the Iowa State program since 2013. He accumulated over 100 wins during his college career earning All-America honors at 125 and 133 pounds.

Hall made his leaving of Ames public on Twitter earlier this summer and coach Kevin Dresser confirmed the news on Takedown Radio.

“He’s off (the C-RTC roster) I didn’t retain him.” Dresser told our own Tony Hager on the radio program.

Looking for a place to train for the remaining cycle. Open to any and everything

As a freestyle wrestler Hall was a Junior World Team member back in 2012, and was the 2015 University Nationals champion. Last July when Iowa State head coach Kevin Dresser announced that the Cyclone Wrestling Club had been reformed into the C-RTC, he described Hall as “super talented” and he had the ability to move to the next level.