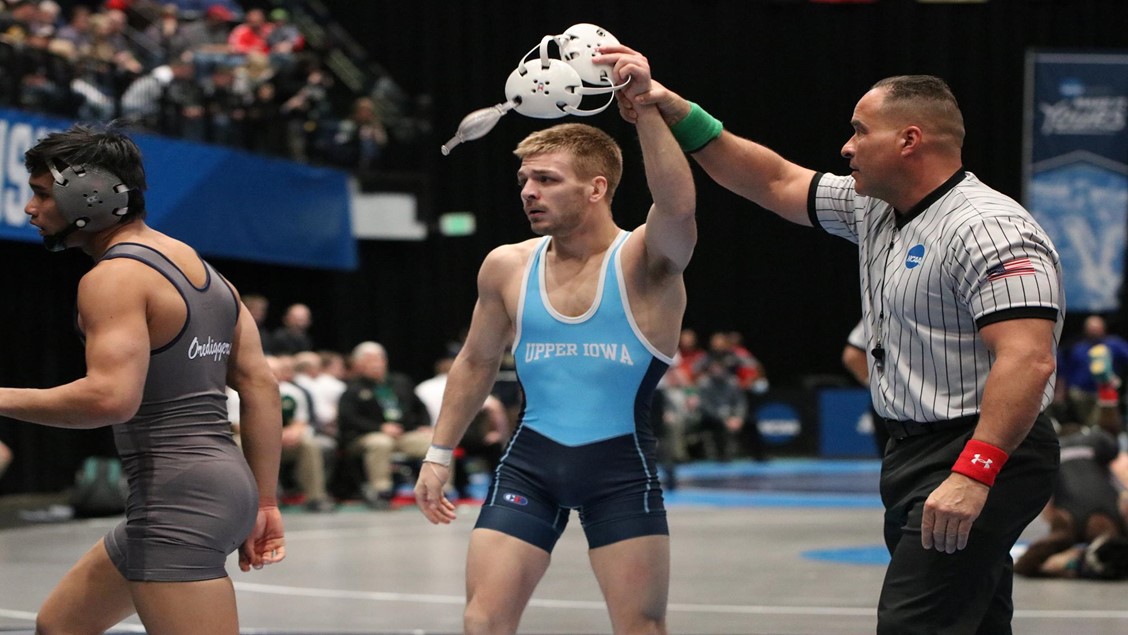 Brief bios and a recap of the quartet’s run through the regional and national tournaments can be found below as well as on the document linked above.

CODY LAW – SR – WINDBER, PA. – SUPER REGION ONE – UNIVERSITY OF PITTSBURGH AT JOHNSTOWN
Senior Cody Law posted a 25-1 overall record and a 14-0 dual meet record for the University of Pittsburgh at Johnstown this past season. Law earned his second consecutive Super Region I title and the NCAA Division II National Championship at 157 pounds with a 6-3 decision over St. Cloud State’s Larry Bomstad. Law was the second-ranked Most Dominant wrestler in NCAA Division II, averaging 4.36 team points per match, while his nine technical falls in 46:53 also ranked second in Division II. In two seasons at Pitt-Johnstown after transferring from Penn State University, Law finished with a 55-2 overall record and a perfect 25-0 mark in dual meets.  He earned a spot on the All-PSAC Team two straight years, including winning a conference Championship in 2017.  Law also was a two-time All-American with a fourth-place finish in 2017 to go along with his National Championship in 2018.

NICK BECKER – SR – HARTFORD, WIS. – SUPER REGION TWO – UNIVERSITY OF WISCONSIN-PARKSIDE
Nick Becker, a redshirt senior with the University of Wisconsin-Parkside, capped off another perfect season with a 24-0 record, his third Super Region II title and a third straight NCAA Division II title at 174 pounds. Becker’s final win that carried his record to 89-0 as a Ranger came in an 8-4 decision over No. 2 Nolan Kistler of California Baptist University. The Hartford, Wis. product claimed 20 bonus-point wins this season with eight victories by fall, eight by tech fall and four by major decision. Becker is the only wrestler in the UW-Parkside storied history to win three national championships and he will continue to impact the Ranger wrestling program as the graduate assistant moving forward.

JOSH WALKER – SR – TULSA, OKLA. – SUPER REGION THREE – UPPER IOWA UNIVERSITY
Josh Walker, a senior at Upper Iowa University, made the most of his final run at a national tournament finally reaching the pinnacle of the sport as a senior. The Tulsa, Okla. native put together an impressive 36-6 senior campaign capped off by a Super Region III title and NCAA Division II 133-pound National Championship. Walker was on a mission during the National Championship weekend and did not surrender a single point to his four opponents recording a pair of falls (1:20 and 4:37) and a pair of shutout decisions. Walker defeated George Farmah of Minnesota State University, Mankato in the final 1-0 thanks to an escape in the second period. Walker claimed four All-American honors in his collegiate career including two NJCAA honors and two at the NCAA Division II level with Upper Iowa.

DAXTON GORDON – R-SO – EL CENTRO, CALIF. – SUPER REGION FOUR – CALIFORNIA BAPTIST UNIVERSITY
Daxton Gordon became the third wrestler in California Baptist University history to win an NCAA Division II Championship after taking down St. Cloud State’s James Pleski in overtime for the title. The 149-pounder finished the year on a 20-match winning spree — which ranks fourth-best in CBU history — and boasted a 25-2 overall record. Of his 25 wins, almost half (10) came by major decision, including a 14-2 major over Division I Bakersfield’s Kalani Tonge. After two years with the Lancers, Gordon is now 45-9 overall. He qualified for the NCAA DII Championships as a redshirt freshman, but came one win shy of earning All-American honors.