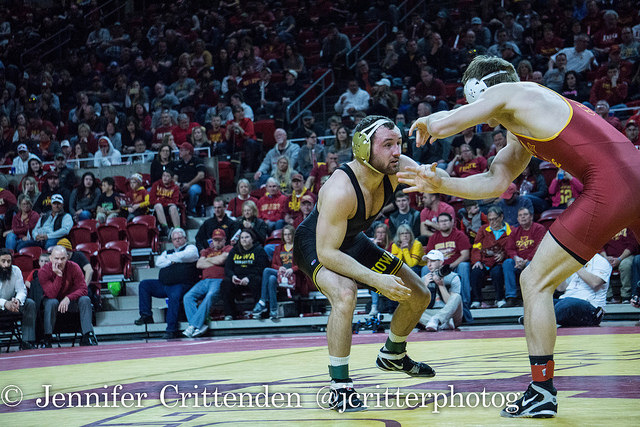 The remaining two spots in the University of Iowa’s lineup has officially been set following the conclusion of team wrestle-offs, which were held Friday, February 23rd in the Dan Gable Wrestling Complex. The two matches were closed to the public, but the University did bring in an NCAA certified official for the matches. The two matches still left up for grabs were the 141 and 174-pound spots. According to head coach Tom Brands wrestle-offs had not been used to determine a spot in the lineup since at least 2014.

“I’m not sure wrestle-offs are the best thing,” Brands said KXnO’s Hawk Central Radio, “But this year, based on the results and how both guys are performing … we’re just going to settle it with a wrestle-off.”

At 141 pounds it was sophomore Vince Turk who came out on top against redshirt freshman Carter Happel by a score of 6-1. The result was very similar to when the two wrestlers met in the finals of the Hawkeyes preseason wrestle-offs which were held in early November. Turk took that meeting as well by the score of 6-2.

The 174-pound bout pitted sophomore Joey Gunther against redshirt freshman Kaleb Young, with the Gunther edging Young 3-2 in the tiebreak periods. Like the 141-pound match, these two teammates also wrestled each other in the finals of preseason wrestle-offs, with Gunther winning that match in overtime as well, a 4-2 sudden victory win.

With all ten weights now set, the Hawkeyes will turn their full attention to the postseason, as the team will head to East Lansing, Michigan for the Big Ten Championships, hosted by Michigan State. The tournament will begin on March 3rd and conclude on Sunday, March 4th.

Earlier this week we learned that the conference was allocated 80 auto-bids to the NCAA tournament with 141 pounds receiving eight automatic bids, and 174 pounds receiving seven. In the latest release of the NCAA’s RPI and Coaches’ Rankings, only Joey Gunther appeared at either of the contested weights coming in at #24 in the Coaches’ poll.