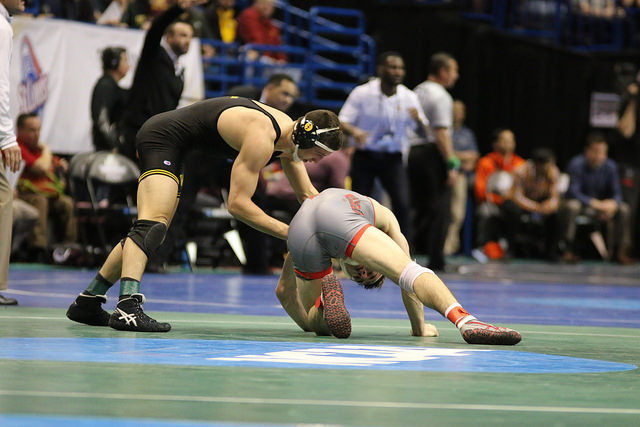 The University of Iowa is still over a week and a half from their first competition, but this past weekend we were able to get a glimpse into what the lineup may look like on November 17th when the Hawkeyes open with the Iowa City Duals. It’s been years since the program has held wrestle off competition open to the public, but this past weekend hundreds of fans packed into the Dan Gable Wrestling Complex on Saturday to witness the finals.

All ten weights saw action this past weekend and while most of the matches went to chalk, there were two key upsets scored by underclassmen that had Hawkeye fans talking before their football team put a thumping against Ohio State on national television.

The first upset happened early on when Paul Glynn managed to score a last second takedown to defeat senior Phil Laux by a final tally of 4-3. With short time remaining in the bout Glynn got in on Laux’s leg and continued to wrestle to the whistle. His action paid off as the ref awarded the takedown, giving him an upset over Flowrestling’s #18 ranked 133 pound wrestler. This battle isn’t likely to be over soon, but Glynn’s performance certainly showed this isn’t a one horse race.

The second upset occurred at 197 pounds where true freshman Jacob Warner pulled out a 4-3 victory over returning starter Cash Wilcke in potentially one of the best matches on the day. Warner picked up a first period takedown, but maybe even more impressive was the fact that he managed to ride Wilcke for the remaining 40 seconds in the period. The pair traded escapes, followed by a Wilcke takedown to tie things at three with a minute left in the match. Rather than attempt to ride Warner out and take his chances in overtime, Wilcke cut Warner giving the younger wrestler the lead and attempted to win in regulation. From there Warner was able to shut his teammate down and carry his lead to a win.

Tom Brands usually make a habit of not starting true freshmen, but for just the second time in his time as head Hawkeye we may see it happen. For the second straight day Justin Stickley managed to come out on top in the 125 pound bout over Perez Perez, this time by technical fall.

Nathan Burak is famously the only wrestler to start as a true freshman under Brands, but with back-to-back wins by Stickley may join list. The only caveat being both Burak and Stickley deferred their college enrollment for one year, which makes them true freshmen in name only.

Securing victories by bonus were Michael Kemerer at 157 pounds and Mitch Bowman at 184 pounds. Kemerer is a returning All-American, while Bowman is looking to earn his first starting role.

Three other returning starters picked up victories on Saturday with Brandon Sorensen downing Pat Lugo at 149 pounds, Joey Gunther using sudden victory to get by Kaleb Young, and Sam Stoll coming out with a 2-0 win against Aaron Costello. Sorensen used a well timed third period takedown to beat Lugo, who was a top 10 ranked wrestler for Edinboro before transferring to Iowa.

Vince Turk used a pair of double leg takedowns to win the 141 pound starting spot over redshirt freshman Carter Happel. Considered our top matchup to watch at the wrestle offs, both wrestlers were able to get to the legs of their opponent, but it was Turk who managed to finish on those attempts which led to his victory.

Rounding out the results was Logan McQuillen’s 9-8 win over Jeremiah Moody at 165 pounds. The expected starter at this weight is redshirt freshman Alex Marinelli, but he was allegedly sidelined due to injury. At this time it’s unclear if Marinelli will be able to open the season at the Iowa City Duals.

On a final note for wrestle offs that needs to be mentioned is the level of familiarity each wrestler had with their “opponent”. Often times these matches don’t paint the full picture of who the starter should be, but they are rather a puzzle piece with more of those pieces needed to get to the end result. These wrestlers see each other’s technique on a daily basis, and through countless practices are able to get a feel for an individual’s moves and tendencies.

The truth is the battles at 133, 141, and 174 pounds likely aren’t 100% settled until Brands sees his wrestlers compete against outside competition. As an example in 2014 Brands sent three wrestlers to the Joe Parisi Open to help determine his starter at 149 pounds. After that he still waited until Midlands before Sorensen was officially given the starting role. We will likely know more on the lineup situation after Brands meets with the media later this week, but for now at the very least we have an early leader board.