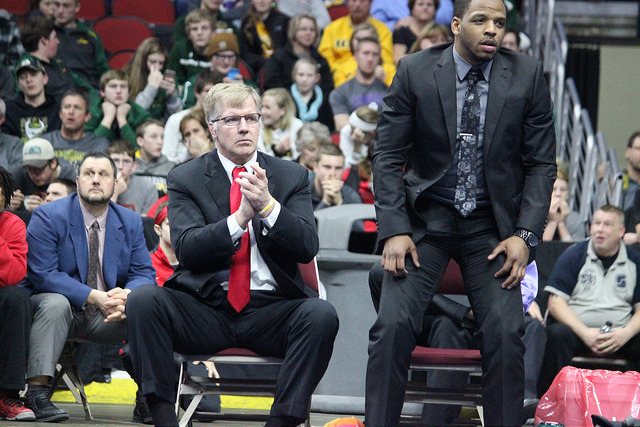 Davenport Assumption head coach Pete Bush is stepping down as head of the program. The news as first reported by the Quad City Times was confirmed to IAwrestle in a text conversation with Bush this afternoon.

“I’d love to stay around for one more year, but it has run its course,” Bush told Matt Coss of the QC Times. “I think we need a little new blood in Assumption’s program. It has been a great run.”

A national champion under Dan Gable at the University of Iowa, Bush has had an extremely successful run as head coach of his alma mater over the past 12 seasons. During his run Assumption has won seven team titles and amassed over 250 dual wins. Most recent standouts include Matt Robertson and Julien Broderson, who each claimed their second state title this past weekend at the Iowa high school state championships.

“Coach Bush has been in my life the past four years and ever since then, he’s treated me like his own.” Broderson told IAwrestle, “He would let me come down onto the mat at state duals, he would let me ride the bus with the team. He has just overall been such a big supporter in my life and I know I wouldn’t be the man I am today without Coach Bush.”

“Coach Bush has had a huge impact on my career and without him I wouldn’t be a two-time state champ.” Robertson told IAwrestle, “He’s not only helped me in the wrestling room, but off the mat as well. He’s been much more than a coach for me and I could never thank him enough.“

According to Coss, Bush is still willing to help out with the program if his replacement so chooses, though he is looking forward to being able to attend some of his son’s wrestling meets. Bush’s son Danny is Iowa State’s current starter at 174 pounds as a junior.