1A First Round Matches to Watch – Updated Results 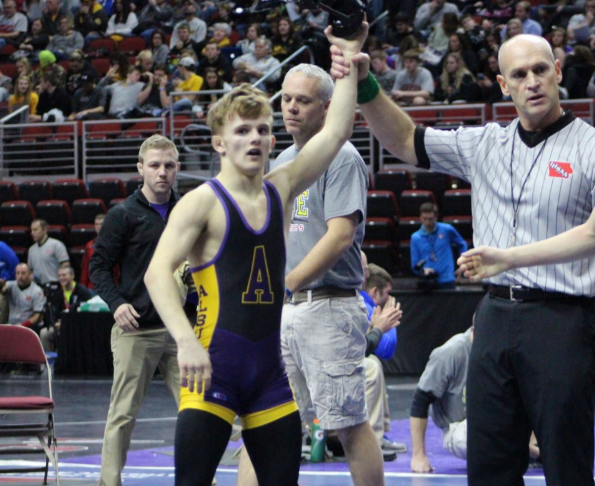 106 – #4 Donavon Hanson (Manson NW Webster) vs #1 Jaymus Wilson (Alburnett)
The freshman from Manson comes in with only one loss on his record to #7 Connor Attkisson who Hanson beat earlier in the year. Wilson comes in with 4 losses on the season, but 3 of those all happened in one day, up a weight, early at an extremely tough Independence tournament. Although Wilson comes in as the district runner up, you would still have to call him the favorite since he already is a two time state placewinner (3rd & 5th). Since dropping down from 113 Wilson had been undefeated heading into districts, but a 9-0 loss to the #2 ranked Daniel Kimball might make you wonder whether Wilson just had a bad match or if he might be susceptible to getting taken out by Hanson.

132 – #3 Joshua Tibbits (Martensdale-St. Marys) vs #4 Gabe Lewis (Denver)
This match might be the hypothetical semifinal on the top side of 132 with the winner as the favorite to make the finals and the loser in a battle just to place. Tibbits has only 1 loss on the season to #2 Logan James from Underwood. Lewis comes in with 4 blemishes. One of those losses was out of state, 2 were to the top ranked wrestlers in 1A and 2A. In choosing a winner here you might tend to lean towards Tibbits since he has made the podium before, and he was quite possibly one Chance Throndson cradle away from standing on top of the podium last year. Lewis went 1-2 at state last year, but has definitely narrowed to gap here with wins over 3 wrestlers ranked below him in 1A.

138 – #1 Gable Fox (Don Bosco) vs #5 Connor Lange (Missouri Valley)
This might be the match most likely on this list of 10 to get out of hand the quickest, but a bout between two top 5 wrestlers whose teams will be coming to Des Moines expecting to leave with a top 3 finish needs to be included. You could get a preview to this match Wednesday afternoon as Bosco will likely face Missouri Valley in the State Dual Semifinals. These two combine for a total of 3 losses. Lange was 6th as a freshman but missed the podium last year. Fox is already a 3 time placewinner (3rd, 3rd, 7th) looking to cap off his career with that gold medal that has eluded him so far.

145 – #4 Garret Thompson (Logan-Magnolia) vs #3 Kory Van Oort (West Sioux)
This match was set up with Van Oort entering districts undefeated until dropping a tight finals match to #6 Wade Mitchell of Woodbury 4-3. Van Oort was relatively untested heading into districts, he did have a win over Mitchell earlier and, Oh Yea there is the whole him being in the state finals last year. Nobody is doubting the West Sioux wrestler is tough and nobody should be doubting Thompson either. He was picked by many to come out on top of a very tough 132lbs bracket last year after having an excellent regular season. Thompson has had a similar regular season this year where he had a few bumps early but has been on fire the second part of the season.

152 – #7 Austin Eilers (Lawton-Bronson) vs #6 Kaleb Krall (Wapsie Valley)
This the only match listed here that features two wrestlers outside the top 5 in the most recent rankings. That’s what happens though when you have a first round match up between a defending state champ in Krall and a guy who has some elite wins this year in Eilers who took out 2A’s #2 Skyler Noftsger of Ballard earlier in the year. Krall has taken a couple more losses this year, but 3 of them have been in overtime and another a two point match all to elite guys. Eilers has two other trips to the state tournament under his belt his freshman year he went 0-2, but last year he picked up a 5th place finish. Can Eilers pick up another podium finish at the state tournament or will Krall start winning the close ones when it matters most?

152 – #3 Caleb Wilson (Denver) vs #5 Garrett Arment (Woodbury Central)
The most important thing to watch for in this match is the health of Arment. He has medical forfeited a few matches all the way back to December 12th, and most recently at sectionals and districts. That doesnt mean he hasnt picked up big time wins along the way though. He has wins over Krall, Eilers, and Geise inside that time frame. All but one of Wilsons losses have come from top 2A wrestlers. Both wrestlers lost their matches to place last year by 2 or less points. Neither wrestler has placed at the state tournament yet, so you know they will both be wanting to start off in the right direction on the bracket.

170 – #1 Gabe Pauley (AHSTW) vs #3 Gunnar Grunsted (Panorama)
This will be a rematch of the Charger Invitational Finals on January 27th that Pauley came out on top 7-4. Both wrestlers will be looking to make it back on the podium after Pauley finished 3rd at 160 and Grunsted finished 5th at 170 last year. Pauley is undefeated on the season while Grunsted has lost to both Pauley and #2 Haynes twice. He managed to close to gap on Haynes though from 9-0 to 9-7 at districts, so Grunsted appears to be wrestling his best heading into the state tournament.

220 – #4 Nick Gaes (Alta-Aurelia) vs #3 Chaz Clark (Pleasantville)
Two wrestlers with very opposite schedules make up this match to watch at 220lbs. Gaes comes in undefeated, but lower ranked because he hasnt been tested much this season with quality opponents. Clark on the other hand has wrestled a handful of ranked wrestlers/state qualifiers this year, even bumping up to 285 a few times to do so. Gaes fell one match short of making the podium last year while Clark went on a run with a major upset over Rief from Missouri Valley in the semis to reach the finals. Will Gaes finally reach the podium or will Clark get his 2018 tournament off on the right foot to make another run.

220 – #6 Chance Strough (Bedford/Lenox) vs #5 Marquise Paino (Tripoli)
Oh, did we mention that the winner of the Gaes/Clark match gets the pleasure of meeting one of these two in the quarters? Talk about a tough draw for someone. Here is an interesting match up between Strough who is at a new school this year and Paino who is in a new state this year. Strough only has 2 in state losses this year and they both were to #1 Rief. He has yet to make to podium finishing 0-2 last year at state in 2A. Paino has had his fair share of matches against ranked wrestlers this year beating #7 O’Connor from Lisbon and then dropping a pair of close matches to #9 Santee. Paino placed 6th at the Illinois State Tournament last year after reaching the semis. He lost to the runner up and 3rd place finishers before defaulting his 5th/6th place match.

285 – #4 Cody Crawford (WACO) vs #2 Enrique Maravilla (Manson NW Webster)
Here we have another match up with a wrestler that placed out of state last year. Maravilla was a 3rd place finisher in class 3A at the Georgia state tournament. He won his first match to reach the semis of the 8 man bracket before losing to the eventual champ by 1 point. It was the other wrestlers closest match of the tournament. Enrique then went on to bonus his way back for 3rd. Crawford was an 8th place finisher last year, he only has 2 losses on the season and they were both to 3A wrestlers. Maravilla also has two losses on the season, one coming from class 2A’s Spencer Trenary of Clarion and the other to #5 Beminio of Belmond at districts.

2 thoughts on “1A First Round Matches to Watch – Updated Results”