2A First Round Matches to Watch – Updated Results 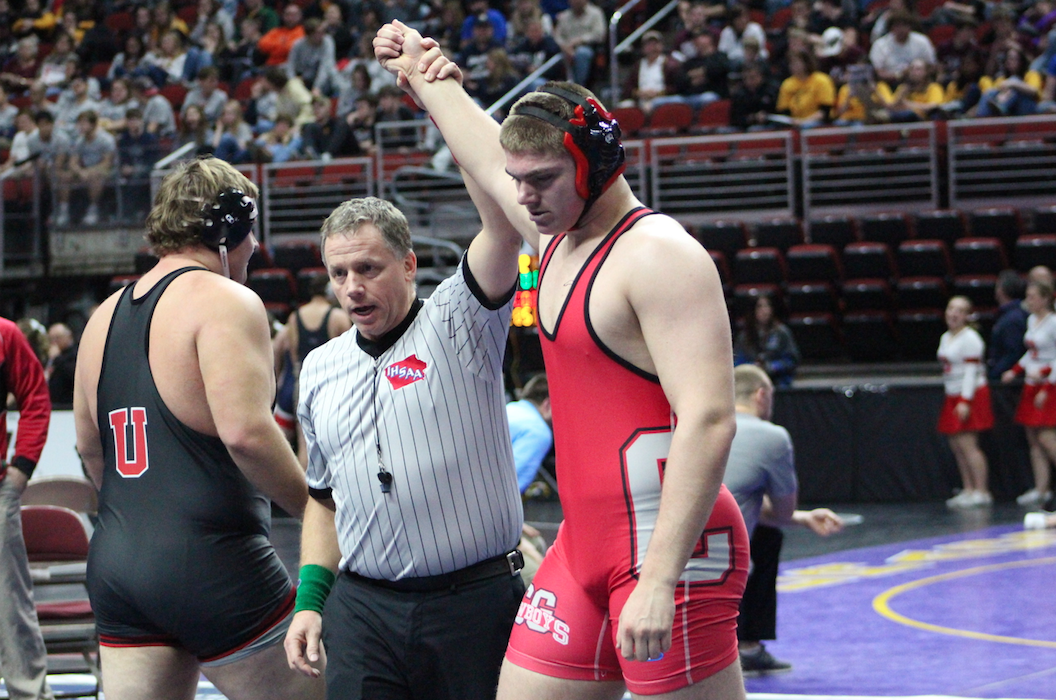 These two came into high school with plenty of promise but have been even better than advertised. Both have a bunch of good wins and no bad losses this season. Lewis lost in overtime to #1 Kadel to come in as a district runner-up to set up this match. Whoever wins this match becomes the favorite to make a run to the state finals.

We get another dynamite freshman here with Kain Luensman who has been even better than expected this season including a win over Beck earlier this season. Beck returns to the state tournament after placing at 106 as a freshman last season. The winner of this match looks to have a good road to the semifinals.

With these two towns being close and seeing each other a few times it’s crazy that these two have not met yet. Babcock came in as a highly touted freshman and has been very good this season. New Hampton enters as the class 2A favorites but with some tough first round matches this becomes even more important. He will have his hands full with the veteran Anderlik who is a past state place winner.

Sieperda comes into his senior state tournament as a 2 time placewinner and was fourth at 132 last season. He has been really good again this year and comes in at 38-1. Jack West came into high school with a great resume and qualified for state as a freshman last season but fell short of the stand. He missed a little time earlier this season but has been really good since returning to the lineup and comes in at 39-3.

Don’t let Vest 10 losses this season fool you. He had a bad stretch earlier this season but is a very dangerous wrestler that nobody wanted to see first round. Both of these guys finished 5th at last year’s state tournament at 138 and 145 and it should be a really fun matchup.

With the 3 highest ranked wrestlers all on the bottom side of this bracket Mangold might be the favorite to reach the finals from the top side. He will have to get past a very tough first round matchup before worrying about that though. Rohmiller has been really good this season and most of his losses came at 160 before dropping to 152.

Hageman has been a highly ranked wrestler his whole career but has had a lot of bad luck and fallen short of the state tournament until his senior season. He lost some hard-fought battles at sectionals and districts to #1 Ramirez and his reward is to face #3 Cummings in the first round of state. Cummings only losses are to 3A wrestlers and this should be a really fun match to watch. The winner becomes the clear favorite to reach the state finals with only 1 other ranked wrestler on their side of the bracket.

Jenness is a returning state place winner and has had a really good season so far coming in at 42-2. Grover is a returning state qualifier looking to reach the podium this season. This side of the bracket is going to be very tough to navigate and it starts in round 1 for these guys.

Powell is looking to improve on his 6th place finish from last season. He’s had a really good season so far but is coming in off of a loss in the district finals. Cherry has had a great year as well but does have a loss to Powell earlier this season. If Webster City wants to compete for a team trophy they are going to need some points out of Cherry.

These are two very big Heavyweights who are having great seasons in this loaded 2A field at this weight. Trenary comes in with some national credentials but don’t sleep on the very tough Lunsford. After Trenary knocked #4 Etherington out at districts and with the #1 and #2 ranked wrestlers on the other side of the bracket this match becomes even bigger.

2 thoughts on “2A First Round Matches to Watch – Updated Results”