Dresser Proud of Improvement from St. John this Season 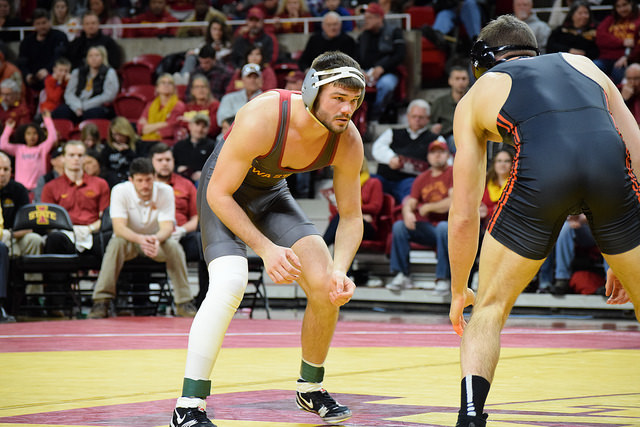 Following the conclusion of the Iowa State-Northern Iowa wrestling dual Cyclone head coach Kevin Dresser met with the media to discuss his team’s performance. Overall Dresser assessed that the season has been one bumps for his squad, but he said that bumps have been mostly good rather than the bad kind. Iowa State was coming off a program worst finish in a dual versus instate rival UNI, with the team only earning victories at 133 and 165 pounds.

The latter of those two wins came from junior Skyler St. John who received both of the team’s starts at 165 pounds this weekend, first a forfeit in the team’s dual against Fresno State and downed Dan Kelly, 7-4 on Saturday. Dresser praised his wrestler for being to make some mental adjustments that allowed him to take over the starting role.

“He slayed some dragons, demons, or whatever you want to call it from here on up.” Dresser told the media, gesturing to his own head. “He got done what he needed to get done.”

Of course making those mental adjustments was not the only thing St. John did to win the spot. During his weekly press conference Dresser mentioned that the team would be holding wrestle offs to determine the starter for the home stretch of the year. According to the head Cyclone St. John was able to come out on top of both of his wrestle offs this week, which earned him the spot.

“Skyler St. John has had a real rocky year and he went and had to win two wrestle offs this week to get here over (Brady) Jennings. Here he is and he goes out and wins in a tough environment.” Dresser said on the hostile environment of UNI’s West Gym.

Dresser went on to praise St. John’s work ethic in the room stating that his level of commitment to the program is what he is hoping to see out of other wrestlers in the room.

“I am proud of Skyler because he comes every day and lays it on the line in the room. Ultimately that’s what we have to do to change. You know the places we are not getting it done, that’s where it is going to change Monday in the practice room, Tuesday, and Wednesday and that’s the message my guys need to listen to.”

Up next the Cyclones will return home to host their other instate rival, the University of Iowa, this Sunday. A match that will grab many fans’ attention due to the nature of rivalry, and the fact that Iowa State’s entire coaching staff all competed their college careers for the Hawkeyes. Skyler St. John also has ties to the Hawkeyes, having spent his first three seasons of his college career in Iowa City.

One thought on “Dresser Proud of Improvement from St. John this Season”