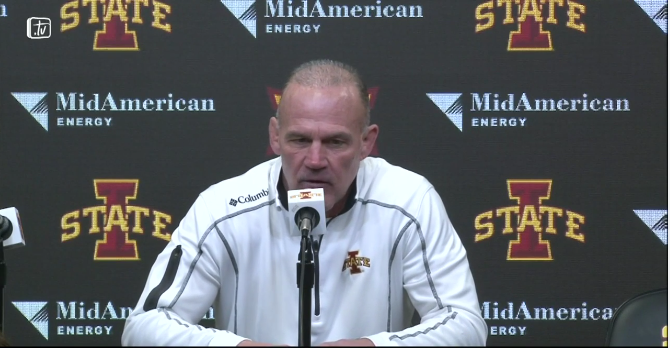 Iowa State head coach Kevin Dresser met with the media on Monday, February 5th to recap his team’s performance against North Dakota State and South Dakota State. The head Cyclone was also able to provide us with some key updates on his team’s lineup and what it could look like going forward.

Bummed our guy Ian Parker didn’t make the trip. Got a little dinged up this week, but he’ll be back on the mat with us in no time!#Cyclones

“At 141 we were obviously a little dinged up.” Dresser told the media, “I don’t know the status of the knee injury that Ian (Parker) had but I think he is most likely going to be ready to go.”

The comments from the head coach are obviously encouraging that his wrestler may only end up missing the past two duals due to the injury. Coming into last weekend the redshirt freshman was riding a wave of hype following his back-to-back wins over Michael Longo (Oklahoma) and Dean Heil (Oklahoma State) the previous weekend. The two results marked the debut of Parker at 141 pounds after he was the team’s starter at 133 pounds up until that point.

“Obviously just look at what he’s done and making steps in the program. Ian Parker knocking off the guy at Oklahoma and then knocking off the NCAA champ who got back on the horse to beat someone pretty good this weekend, the UNI guy. The progress with him with him and coach Metcalf has been darn impressive.”

When asked if he could discuss the nature of Parker’s injury Dresser commented that it was of the knee variety, but continued to maintain that he believed his wrestler would be back by this weekend, or the following weekend at the latest.

Also on the injury front Dresser confirmed that sophomore 125 pound starter Jakob Allison’s year is officially done after requiring surgery to repair his broken hand. A walk on from Iowa State’s club team, Allison moved into the starting role earlier this season after the departure of Danny Vega and Jon Marmolejo from the squad. After Allison broke his hand in early January the team then turned to another walk on, Sinjin Briggs for the starting role. Allison was previously expected to return in late February, but that is apparently no longer the case.

“They had to go in and do surgery and so that pretty much knocked him out for the rest of the year.” Dresser said of Allison’s possible return, “He did a great job for us coming in and I am sure he will be on our roster moving forward.”

The team is also moving closer at find a starter at two of the upper weight-classes starting with Brady Jennings picking up a signature victory at 165 pounds during the North Dakota State dual. Dresser complimented his sophomore’s performance and credited him as a big part in his team’s come from behind victory over NDSU.

“We got to figure out still who the guy is but I think one guy made a pretty big statement there.” Dresser said of Jennings, “You start knocking off good guys and then all of the sudden we get into a barn burner of a dual meet.  You throw out a guy like Brady Jennings, who oh by the way who just happens to knock off the 17th ranked guy in the nation. He gets taken down and we’re down 20-3 [team score] and he comes back and beats the guy 7-2 and rides him for a month.”

So far this season we have seen the Cyclones use multiple starters at the 165-pound weight class including juniors Logan Breitenbach and Skyler St. John, sophomore Colston DiBlasi, and now Jennings. After last weekend’s performance Dresser still doesn’t feel he has one starter at the weight, but he does think there is a leader.

“I think (Jennings) is the favorite there, we still might have a wrestle off. We are going to decide that this week, but he’s definitley the top guy on the ladder to beat. He’s proven himself. We’ve been rotating and testing guys, but we’re probably to the point where we need to have some wrestle offs and decide.”

Another weight where Dresser was able to confirm there would be a wrestle off is 174 pounds where we lately we have seen a lot of junior Danny Bush, but sophomore Hank Swalla has been in the mix as well. Bush, who made the cut down from 184 pounds has apparently made some strides in managing his weight and according to Dresser has “figured out the weigh in process”.

“We’re going to have a wrestle off this week between him and (Hank) Swalla so we will know what’s kind of going on at 174.”