Panthers get largest win over Iowa State in program history 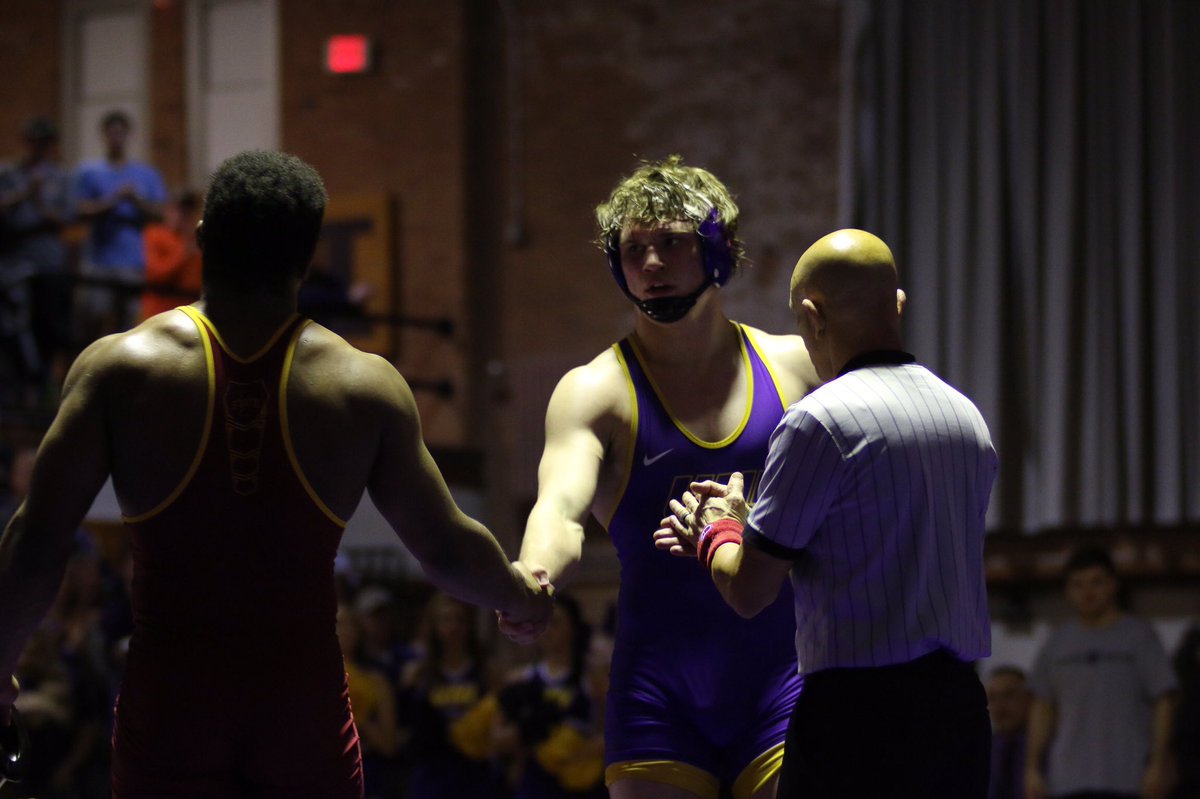 The dual Saturday night in the West Gym started and ended with a bangs. Bookends Jay Schwarm and Carter Isley helped lead the Panthers to a dual win, 31-7, over Iowa State. It was the largest margin of victory for the UNI program over the Cyclones in program history.

In one of only two matches that went Iowa State’s way, Markus Simmons put on a show for the Cyclones. He racked up 14 points and didn’t give up one against UNI’s Jack Wagner. Wagner had a couple of opportunities, but some great defense and explosive offense from Simmons kept him from scoring. Simmons looked good in front of the hostile crowd.

Josh Alber for UNI received a forfeit. Iowa State’s Ian Parker has been out with a knee injury. Afterwards ISU head coach Kevin Dresser said that Parker has been working out with assistant Brent Metcalf this week, but they didn’t feel the need to push their luck with it.

The match of the night, at least going into the dual, came at 149 pounds, where Max Thomsen took down Jarrett Degen 7-5. A(nother) lackluster 2nd period from the Panther kept Degen in the match. Thomsen took down to start the second and nearly got ridden out. After giving up RT in that period he nearly had a reversal, but waited a little bit too long to go for it and the official called for a stalemate. Thomsen got out from bottom with very short time left in the period.

He did put together a takedown in the first, and two more in the 3rd to push his lead to 7-5. Giving Degen credit, he kept coming in the third and his length seemed to give Thomsen problems finishing shots. You can hear Schwab talk about the match, and the rest of the dual, below.

The matches before and after intermission both were decision and went to opposite teams. At 157 pounds Logan Ryan defeated Chase Straw, 3-1, in a match that was more exciting than the score indicates. Ryan had some heavy hands and snaps to wear on Straw and finally connected on a shot in the third period to come away with the win.

At 165 Skyler St. John took down and reversed Dan Kelly in the first period, then added an escape point and another takedown in the third to pull away for his 7-4 win. St. John looked good and scrambled out of some tough situations that Kelly put him in. Dresser said that St. John won two wrestle-offs during the course of the week to earn the starting spot Saturday night.

174 was nearly as one-sided as predicted, with Taylor Lujan beating Danny Bush 17-6. Lujan took down Bush at will, racking up seven T2’s and one reversal. Lujan looked for the fall a couple of times but couldn’t get Bush over.

Drew Foster and Jacob Holschlag both had close, exciting matches at 184 and 194 pounds but eventually both came away with wins. Foster defeated Dan Pestano in a rematch of two years ago, 6-4. The Panther had two first period takedowns and that proved to be enough as Pestano came at him with everything he could in the third, getting a takedown of his own before time ran out.

Foster didn’t need a takedown to win his match. He rode Sam Colbray for the entire second period to secure riding time and then got an escape point in the third after starting on bottom.

The other bookend – Carter Isley’s match – was pretty typical for a heavyweight bout, with Isley getting an escape point in the second period and Marcus Harrington getting on in the third after both started those periods on bottom. Then Isley hit a double leg for a takedown on the edge of the mat, but Harrington reversed him almost immediately to tie things up at 3. Isley got the escape point on a restart, and then held off Harrington for the win. That sent the crowd home loud and happy.

The Panthers are next in action next Saturday at 2PM for senior day against the MAC Champion Missouri. Iowa State will go home for the final time this season next Sunday as they take on the other instate school, Iowa.

Note – Rankings are from the most recent NCAA coaches panel.