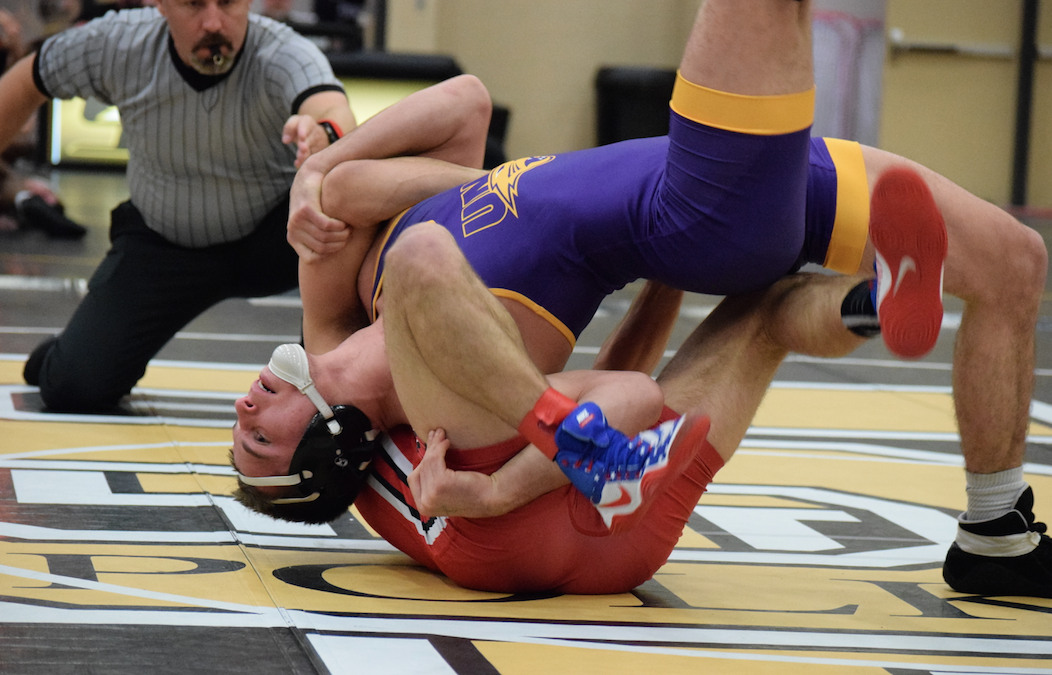 UNI returns home for only the second time this season as they take on the North Carolina Tar Heels in the West Gym this Monday night. The Panthers are 4-3 all-time against UNC, but it’s been a while since they have met, with the last meeting coming in 1989.

The Panthers haven’t seen dual action in nearly a month. A fourth place finish at the Cliff Keen Invitational in Las Vegas and the UNI Open were sandwiched in-between duals. With the limited dual schedule and the even more limited home schedule all the duals are important, but with UNC coming off an upset win Doug Schwab’s crew needs to be on their game tonight.

B. The Panthers need to win the matches they are “supposed” to win. Rankings might not mean much, but there’s no doubt that Josh Alber, Taylor Lujan, Drew Foster, and Jacob Holschlag are very good. All of them need to come away with wins for UNI to win the dual.

4. An unranked wrestler needs to pick up a victory. Paden Moore picked up a good win against Joe Galasso in Ithica, NY, but dropped a major decision to NDSU’s Clay Ream. Isaiah Patton, Jack Wagner, and Carter Isley are all searching for their first dual win (so is Jacob Holschlag, but he hasn’t wrestled in a dual yet). This is going to sound obvious – but if one of these guys can pick up a win it will greatly help UNI’s chances of winning the dual.

There are a few top-20 matchups tonight, and we’ll start with the big one, Troy Heilmann vs Max Thomsen at 149 pounds. The two met at the previously mentioned CKLV, with Heilmann coming away with a 3-2 decision. For anyone who saw the match you could see that Thomsen was a little hesitant with his shots, and Schwab talked a little bit about that about that in the past. Seeing Heilmann for a second time, and the home-arena advantage should give Thomsen a boost in this match.

At 184 #9 Drew Foster will get #16 Chip Ness. Ness is coming off a 13-11 overtime loss to Nebraska’s #6 Taylor Venz yesterday, so you would think the Tar Heel would be motivated to get the win. Foster has had some conditioning issues coming into the year, but looked solid at the CKLV, getting a revenge win over  #13 Cornell’s Max Dean and taking seventh place from then-ranked #8 Jordan Ellingwood from Central Michigan. Foster defeated Ness 5-0 at the CKLV to knock the UNC wrestler out of the tournament.

In a just-missing-out top-10 matchup at 174 pounds #7 Taylor Lujan should have #11 Ethan Ramos, but Ramos is coming off an injury at the CKLV, so we’ll more than likely see Adis Radoncic for the Tar Heels. If Lujan sees the backup the Panthers should have another opportunity for bonus points in another big mismatch on paper.

We saw Rudy Yates take the mat last weekend at the UNI Open down from 141 pounds at the Jim Koch Open a couple weeks ago. The lightweight went 3-1 at the lower weight taking home second place. Whether or not we’ll see him tonight is still up in the air but everyone is excited to see him break into the varsity lineup.

This is Jacob Holschlag’s first dual meet this season as well. The 17th-ranked wrestler in the country made his debut in Las Vegas, going 9-2 at the tournament with two pinfall wins and taking home 4th place.

This will be the last time Panther fans will be able to see UNI wrestle in the West Gym until February (!) when they come home to wrestle Iowa State in a Big 12 Conference dual. We’ll be in Cedar Falls tonight so follow me, @Nic_Ryder and @IAwrestle on Twitter for live updates.

As a last-minute aside, this will be former Iowa Hawkeye Tony Ramos’ first trip back to the state as a member of UNC’s coaching staff. Doug Schwab, former UNI Panther Joe Colon, and Ramos all have a history from Colon and Ramos’ time on the freestyle market, so don’t expect any punches pulled tonight.

Note: This post will be updated with video from UNI Doug Schwab’s press conference later today.

PS: Schwab sent a message to NFL officials today too in this episode of “Steelers Corner with Doug Schwab.”