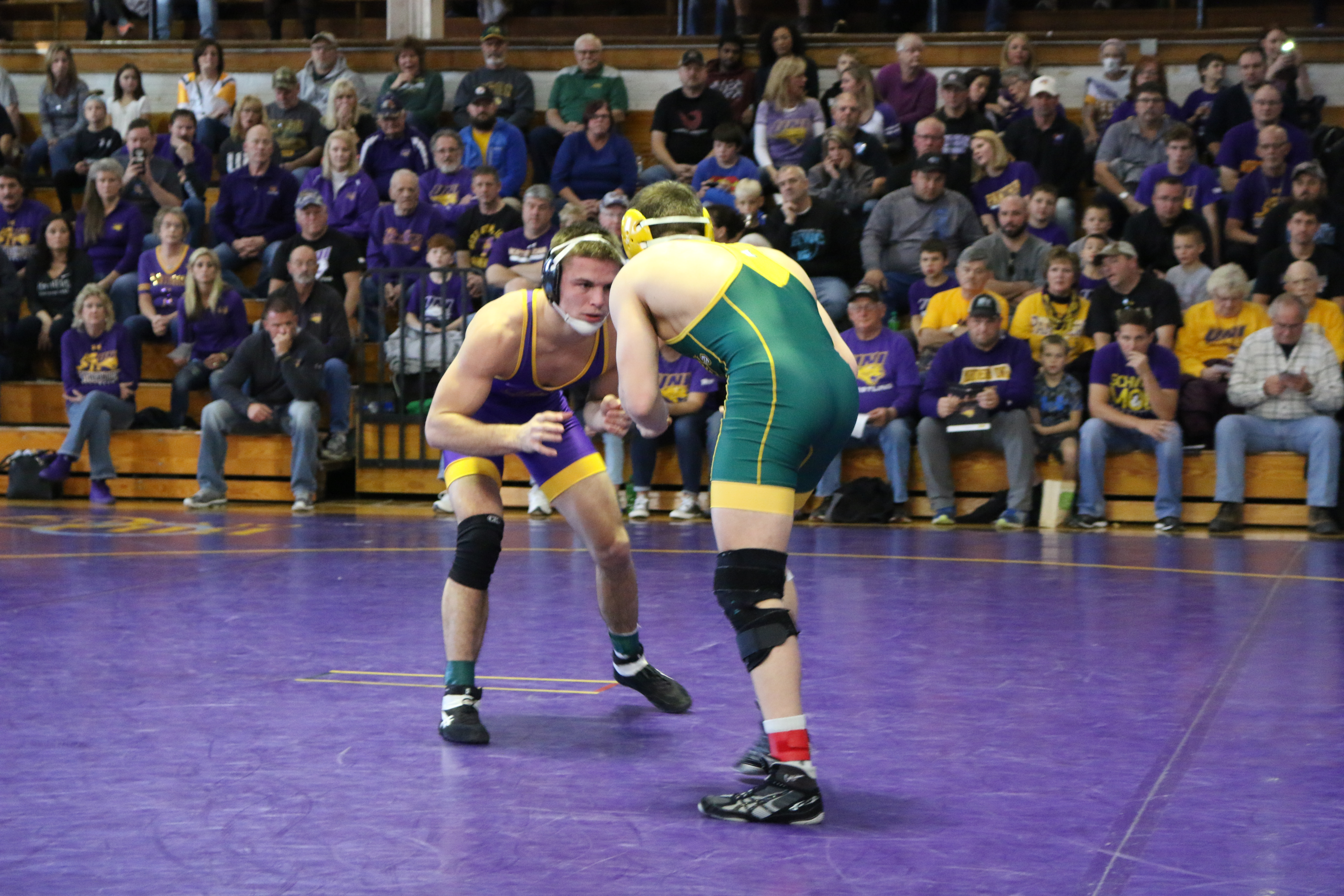 “Nope. Not at all. That is not an excuse. End of that story,” was Scwhab’s response when asked if the travel was a factor. “It doesn’t matter.”

But the Panthers didn’t really need an excuse today. After falling to Cornell 30-17 last Friday night the Panthers were able to keep North Dakota State at bay, winning 21-19. The dual came down to the last match of the day and Josh Alber came up with the tech fall in his first dual meet win of the year.

“It didn’t matter where I was in the lineup, I made up my mind this morning that I was just going to come out and whatever happened, I was gonna try to score,” Alber said after the meet. “To win a dual there are a lot of cogs that have to go into play. I was just fortunate to be the last guy.”

It certainly makes for a more exciting dual, when it comes down to the last match of the night. Had the dual started at 125 pounds UNI would have dropped the final two matches of the night sending the crowd home a tad unhappy.

But it didn’t. The teams first squared off at 149 pounds and Max Thomsen go the Panthers on the scoreboard first, getting a 6-1 win over Kyle Gliva. Thomsen had over four minutes of riding time but couldn’t work Gliva over for any nearfall points.

UNI would lose the lead in the next match, where Paden Moore dropped a major decision to NDSU’s #13 Clay Ream. Moore was down 8-1 in the first period, but came back two within three before dropping the match.

Andrew Fogarty extended the NDSU lead with a fall over UNI’s Isaiah Patton in sudden victory. Patton took #19 Andrew Fogarty to overtime after a great second period ride that included a two-point nearfall. The two went to the third tied at 2, but Patton was unable to get out from bottom forcing sudden victory. The Panther was in on a single leg, but caught caught and thrown to his back to drop the match.

Taylor Lujan got the crowd going with pinfall victory over Dylan Urbach in the 3rd period. Lujan had dominated the match, getting seven takedowns to that point, but that wasn’t enough for the sophomore as he locked up a cradle and finished things early.

At 184 Drew Foster got his first dual win of the year, racking up 2:36 of riding time on the way to an 11-6 win. Foster looked good in the early periods, then faded a bit as he would give up two takedowns in the 3rd.

Neither of the upper weights went UNI’s way as Izaak Shedenhelm fell 11-5 to NDSU’s Cordell Eaton, and Carter Isley lost 7-1 to Dan Stibral. Both men showed well, but neither was able to score enough points to get the win. In Shedenhelm’s case he had the opening takedown and some good scrambles, but wasn’t able to hold off Eaton. In Isley’s case Stibral was just a lot bigger than he was. The Panther was in on a couple shots, but Stibral used heavy hips to get out and around for his own points.

In what was probably the most exciting match of the day NDSU’s (and Carter Lake, Iowa’s) McGwire Midkiff had his redshirt pulled by head coach Roger Kish. Midkiff did not disappoint his coach and came away with a 11-6 win over Jack Wagner. The match featured some really exciting scrambles, and Wagner has a style unlike any previous UNI 133 pounder in recent memory.

Jay Schwarm also had a bonus-point win for UNI. He won 10-2 over Paul Bianchi with over six minutes of riding time.

The Panthers will next be in action at the Las Vegas Invitational the first weekend in December.