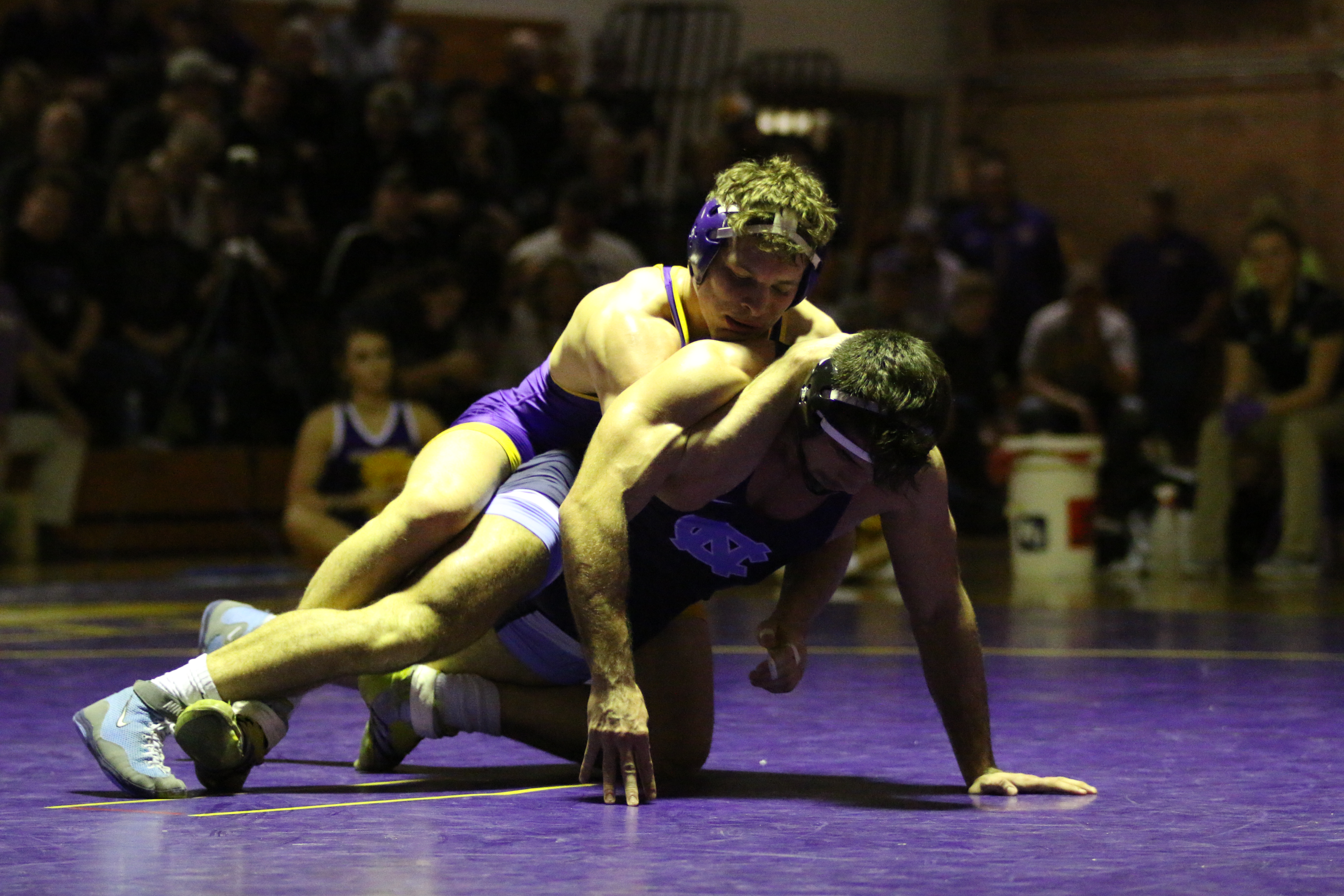 It was just about as close as you could get in a warm West Gym Monday night. UNI and North Carolina each won five matches, each had 16 points, so the dual came down to criteria. On the third, match points scored, UNI came away with the final advantage, 52-48, and won the dual 17-16.

“A lot of hard fought matches, I give North Carolina credit. They wrestled really hard,” UNI head coach Doug Schwab said. “To me we lost on the unsportsmanlike though, we lost a point, it should have been 17-16 to begin with and we want it to be a bigger margin than that anyway.”

The point that Schwab is talking about came off the board for UNI after Drew Foster’s match, when the junior All-American talked a little too much after his win over #16 Chip Ness. Foster was given an unsportsmanlike conduct penalty and cost his team a point. Without the penalty there would have been no need to go to criteria.

Things started well for the Panthers, as Jay Scharm came out with a 5-0 win against Dalton Macri, who is just on the edge of being ranked. Schwarm had over four minutes of riding time doing Scharm-like things on top, but wasn’t able to turn him a final time to get the major decision.

The marquee match of the night came at 149 pounds where #6 Max Thomsen took on #4 Troy Heilmann. Thomsen seemed to dictate the pace of the match in the first period, but couldn’t finish on at least one shot where he was in deep on Heilmann’s leg.

“I think that [Heilmann] is a really good competitor. I watched him wrestle the other night against [Nebraska’s Colton McCrystal] and he put it on him. He keeps coming forward, Max was as deep as you can get on a shot and I can tell you, almost every time he’s going to score there. Give that guy credit but you’ve got to get in there again.

The second period was a wash, with neither man really getting anything going at all. The third saw Heilmann take, and finish, a high crotch that put him up for good. The loss was Thomsen’s second to the Tar Heel this season.

“Progress over what happened in Vegas, but he’s not ok with that,” Schwab said.

There were two new faces in the lineup tonight for Schwab’s team, but both men came out on the losing side of things. At 133 pounds Rudy Yates made his long-awaited debut for UNI, but he dropped a close 3-2 decision to Zach Sherman. After a scoreless first period Sherman came out with a blast double for the only takedown of the match he would need. Yates looked good and pushed the pace, but couldn’t finish any shots.

The other fresh name was at 157 pounds, where Logan Ryan lost 15-5 to Kennedy Monday. Monday himself was fresh off a pinfall win over #7 Tyler Berger at Nebraska yesterday and kept his momentum rolling. Ryan was able to score the first takedown of the match, but it was all Monday from there.

#7 Josh Alber, #7 Taylor Lujan, and Isaiah Patton were all able to secure wins tonight. Alber and Lujan got much-needed bonus points over AC Headlee and Adis Radoncic, while Patton won his first dual match of the season against Clay Lautt 7-1.

Northern Iowa moves to 2-1 in duals on the season, and  will next be on the mat after the new year at the Southern Scuffle in Chattanooga.