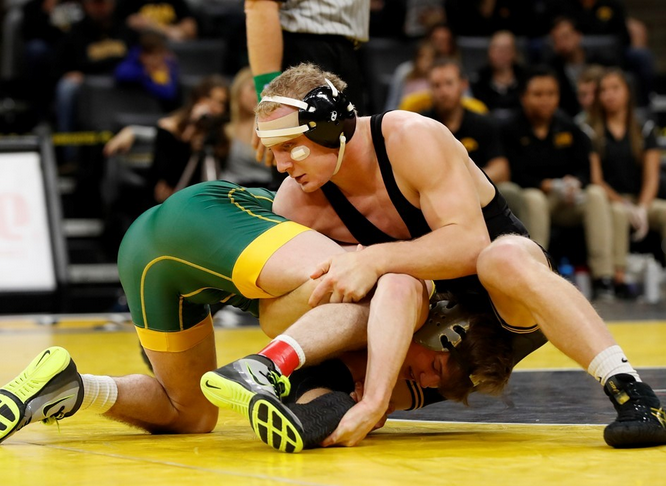 The Hawkeyes are looking to build on a solid 3-0 start this past weekend at the Iowa City Duals. The competition will ramp up a bit as the Hawks will face their first ranked team of the season in #19 Rider.  Listed below are the probable lineups for this clash of ranked teams, all individual rankings are pulled from FLO.

Lets start by taking a look at the lightweights. Justin Stickley will likely man 125 again this weekend, though the Hawks will continue to bring Spencer Lee along, keeping the possibility ever-present in fans minds that Lee could go this year as a true freshman. Stickley had a bit of a rough start last weekend going 0-2 vs Division I opponents, and notching his only win vs ICCC. He will face another quality D1 opponent this weekend in JR Wert who just finished as runner-up at the Keystone Classic this past weekend, and we should expect another tough match to challenge Stickley.

Phillip Laux or Paul Glynn will face off against Anthony Cefolo who went 20-12 last year for Rider. This will be a quality opponent for whomever takes the mat for the Hawks. It’s possible we see Laux get the start after winning both of his matches this past weekend. Getting a win would likely help secure the starting role through the early part of the season up to Midlands.

At 141 pounds we will see Vince Turk continue to man the position for the Hawks after an impressive performance at the Iowa City Duals. He went 3-0 with three bonus point victories and was “worth the price of admission alone” according to head coach Tom Brands. He will look to continue his bonus point streak against a solid opponent in Tyson Dippery who will provide Turk with his first real test this season. Dippery fell to Jered Cortez of PSU in that Keystone Classic finals 4-3 this past weekend and this would be a quality win for Turk, with bonus points being an impressive feat.

Sorensen will face off against PSU transfer Gary Dinmore at 149 and should cruise to a victory in this bout. Dinmore is a very solid positional wrestler though, and could slow Sorensen down in neutral, though bonus points would not surprise anybody.

One of the marquee matchups of the bout on paper should occur at 157 lbs with #3 Kemerer vs #8 Clagon, however Clagon recently had to medically forfeit out of the Keystone Classic this past weekend with a rumored concussion so it’s very possible we see a backup in this dual, and if so expect a bonus point opportunity for Kem Daughg who looks improved from past season (which was impressive to begin with).

At 165 we will see the freshman Kaleb Young back in the lineup at 165 against Riders top ranked wrestler in #6 Walsh. This will be a serious measuring stick for Young and a win here would prove the Hawks have two legit All-American contenders at 165. Young started off with a solid 3-0 mark last weekend, including a 3-2 win over ranked Andrew Fogarty from NDSU. Coach Brands has said that Young will be the guy until Marinelli is ready to go, and a win over #6 Walsh could certainly shake things up.

Following 165 we will see a trio of Hawkeye sophomores in Joey Gunther, Mitch Bowman, and #10 Cash Wilcke at 174 to 197. All three started off their season 3-0 last weekend and will look to continue their perfect records for the season as long as they can. Gunther and Bowman will face solid 19 match winners for Rider last season. Dean Sherry, and NCAA Qualifier Michale Fagg-Daves, will be quality opponents for Gunther and Bowman, with Bowman being the underdog in his match. Wilcke will be the heavy favorite in his match against the freshman for Rider and Hawk fans should expect bonus points.

Closing the dual we will see Stoll go up against NCAA Qualifier Mauro Correnti who will be a solid opponent for Stoll as he to continues to round into form and knock off competition rust. He was pushed into the rideouts with Buffalo’s Jake Gunning last weekend, but managed to come out the victor. Hawk fans know Stoll has the ability to go the full distance and dig down deep early in the season for the hard-fought W.

One thought on “Iowa hosts Rider this Friday”